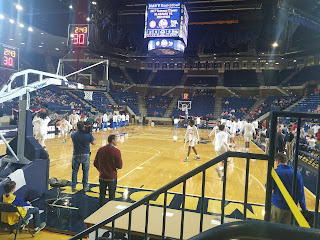 The first half was nearly a disaster.  After jumping out to a 7-2 lead, we forgot how to play defense or set a screen without fouling.   They were in the bonus within 5 minutes.  At one point we had been called for 15 fouls to 5 for Memphis, and we ended the half with 20 FOULS!  For those keeping up at home, that's an average of one foul per minute.  For a team with only 8 scholarship players available, that's obviously a major problem.

The foul trouble led to some rather unorthodox lineups.  I posted after the exhibition game that Law-Dog would not see meaningful minutes in a close game that counts.  Obviously I was wrong, and credit to Schaffer for being a huge part of why we survived the first half.  He proved he's capable of being more than just a mascot.  He scored 5 points including one three where he actually created his own shot with a nice move.

In addition to the foul trouble, we had a difficult time holding on to the basketball.  I think at least part of this can be attributed to the unusual lineups.  We had ten turnovers to go along with our 20 fouls at halftime.

Memphis was able to build an 8 point lead during this stretch.  This is a trend that is starting to concern me.  I know it's still early, but in every single game going back to Canada and including the secret scrimmage against Baylor, we've faced significant deficits in the first half.  We've generally been able to overcome them, but I fear that may be a tall order in a true road game against a quality opponent.

Anyway, despite all of the above, we somehow managed to come back and lead by 2 at halftime.  I really love the way this team has shown the ability to respond to adversity.  With all the foul trouble and the short bench, things could have went south in a hurry, but our freshmen stepped up their game on both ends and just kept grinding.  Memphis helped us out by failing to convert some easy opportunities and bricking a bunch of free throws. 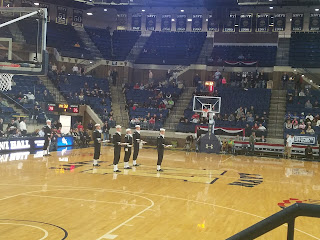 The second half was a different story.  Defensively, we started playing off a bit since Memphis was proving to be terrible shooting the ball, and we focused on taking away their drive.  Offensively, Dazon took over driving to the hole which opened up the perimeter game.  I don't think Coach Avery gets the credit he deserves for his in-game adjustments.   When this team makes their jump shots, they are going to be very difficult to stop.  We scored 82 on a Tubby Smith defense with basically only half of our team.  There was a stretch when Petty, AJ, and Herb made 4 from downtown over the span of just a couple of minutes that effectively put the game away.  We led by 17 at one point and the game was never again in doubt.

In all honesty, I don't think Memphis is a very good team right now.  This might look like a better win by the end of the year, but it's going to take some time for that team to develop the chemistry to play the kind of defense Tubby will expect.

This team is certainly not without issues.  The turnover problem needs to be fixed.  We struggle to set screens without fouling.  We have lapses on defense at times and can't make a free throw.  Most of those issues are correctable, and we have so much depth and so many scoring options that we can win in spite of those issues a lot of nights.  If we can get our whole squad together and continue to improve throughout the year, there is no limit to what this team is capable of accomplishing.

I'm pleased to report that we had a GREAT turnout from our Mid-Atlantic alumni and fan base.  We had nearly as many fans there as Navy.  Alumni Hall seats about 6,000, and there was probably only 1500 or so in attendance for our game.  Nearly a third of that was Alabama fans, while the Memphis fans were mostly confined to one section behind their bench.  In general the Memphis fans were okay, but there was one jackass sitting at their administration table on the floor just in front of me who was obnoxious, turning around to taunt me (and even more inexplicably, Navy fans) during the first half.  That made it a little extra satisfying to shut them up in the second half. 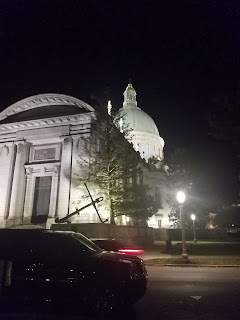 I can't say enough good things about the Naval Academy, their fans/alumni, and the town of Annapolis.  Several people saw me wearing Alabama gear and offered to help, knowing that it's not clearly labeled how to access the campus and the gps route for the arena is useless because you have to go through the security gate first.  One guy tried to give me directions to a place "where the fence is really low and easy to jump and is a great shortcut for getting back downtown after the game," but I decided to pass on that one for obvious reasons.  I was sitting next to a local Navy fan who was a former college basketball official and his son.  They were awesome, he was very knowledgeable, and with me also being a high school official we had a lot to talk about.  He was really impressed with our team and couldn't believe that we had so many freshmen playing so effectively.  His son was polite, attentive, and really into the game, and we were able to convince him to root for the Tide.  I think it goes without saying that we all appreciate the sacrifices our armed services, including those at the academies make for our country, but I was really impressed by how nice and welcoming everyone associated with the Academy was, from the security guards at the checkpoint, to the ushers working the game, to the casual local fans who just live in Annapolis, to their alumni.  As you would expect, the campus is beautiful, it's really something we can all be proud of as Americans. 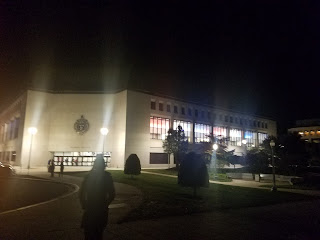 Outside Entrance to Alumni Hall

As for Alumni Hall, well, obviously the Navy has more important things to spend money on than a basketball arena.  It kind of reminds of the old O-Dome in Gainesville with the set up (disclosure: I've yet to go to the newly renovated O'Dome, but plan to this year) with 4 separate entrances with a small lobby area, each with a small area for concessions and restrooms but with no real concourse.  Due to being smaller and less crowded, thankfully it's not the cluster-you-know-what to navigate once you get inside that the O'Dome is.  My biggest issue is there is no statistical information available other than the bare bones score, time, team fouls, and timeouts left.  No player level information, and frankly it was difficult to keep up with how many fouls our individual players had.  This was made worse by the fact that data access in there is somehow worse than in our football stadium on gamedays.

Annapolis has a neat little downtown areas with lots of cool bars and restaurants near the docks.  It's also home to St. John's college (not to be confused with bobbyjack's favorite team, St. Johns University), which also has a very pretty campus.  I only watched the first few minutes of the Pittsburgh game before leaving to get a bite to eat and watch the remainder of that game at the bar.  I was glad to see Navy get the win.  Also, Navy's starting point guard is Hasan Abdullah from Birmingham area high school Clay Chalkville.  I officiated some of his games earlier in his high school career, and am happy to see he's at Navy.  He seemed like a good kid and was a very good ball player.

I stayed in DC and  had a little bit of down time during the day so I braved the cold wind long enough to take a few pics for you guys. 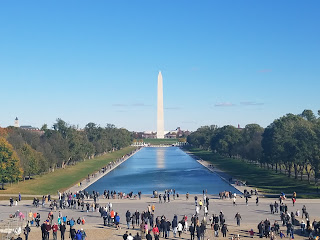 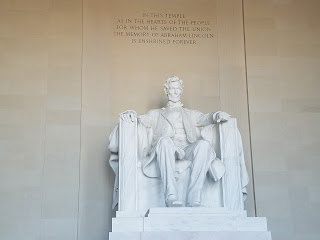 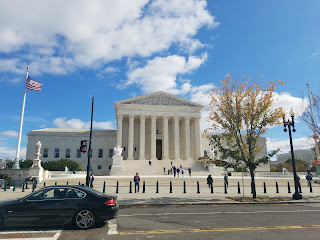 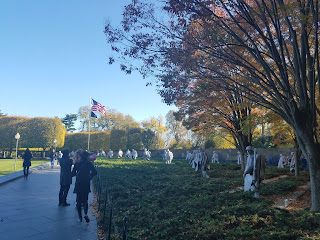 I always try to visit the Korean War Memorial while in DC.  My Great Uncle was killed in the war.  It was special to be able to visit on Veteran's Day. 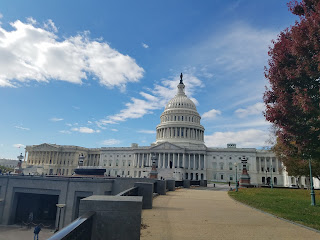 Up next, the Lipscomb Bison make the short trip down from Nashville to Tuscaloosa for the home opener and debut of freshman phenom Collin "Young Bull" Sexton.  Tip off is set for 7p.m. Tuesday and it will be streamed on SEC Network +.  Now is the time to jump on this bandwagon, it's going to fill up quickly.