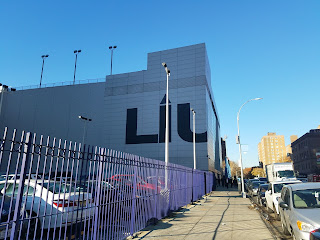 Alabama set the tone early and maintained a comfortable lead throughout to cruise to a 12 point victory over BYU in the first game in Brooklyn of the Barclay's Classic.  An optimist would look at this game and say, "every time BYU tried to make a run, we got a stop or a basket and never let them get within striking distance."  On the other hand, a pessimist might say, "we had several opportunities with the ball and a 10,12, or 13 point lead and failed to put the game away."  Both would be correct.

BYU started the game by making an open 3, but Alabama answered with a 7-0 run, prompting the Cougars to call an early timeout.  That didn't work, as BYU had to burn their second timeout a couple of minutes later after Petty made a couple of 3s to take a 20-8 lead.  From there, BYU would make runs to make it interesting, but each time we got a big stop or a basket at the other end to push the margin back over double-digits.

There was one period in the first half when we went with a lineup of all bench guys in AJ, Herb, Riley, Reese, and Galin.  While all of those players are great in their roles; I really didn't like having them all on the court at the same time.  The pace slowed and the offense came to a grind, but they managed prevent any big runs from BYU.

Offensively, we had a very balanced attack.  Petty led the way with 16 points on 4 of 7 shooting from 3 point range.  He did take the ball to the basket a few times, which I was pleased to see, even if he wasn't able to finish.  Sexton was also in double-digits with 10 points, but it really seemed like a lot more than that as he was involved in many plays.  He had 3 assists to only one turnover.  Herb had another exciting game drawing two huge charges, and there was at least one other block charge call that could have gone his way.  Once again, the defense really stepped up in the second half against a team capable of putting up lots of points.  Donta had one of his better games with 14 points including a couple of dunks, 9 rebounds, and some great work on the defensive end.  I also thought Petty played better defensively.  BYU did miss a few open looks, but a big part of their 4 of 17 3 point shooting is because our guys did a much better job switching and communicating on defense.  Dazon Ingram had another solid game with 13 points.  I was a little surprised Dan Giddens continued to start, but I thought he played well overall.  He ended up with 8 points including an awesome dunk in the first half that nearly brought the goal down. 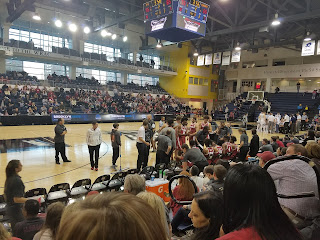 I hate to continue to harp on the issue, but this "tournament" is a joke.  All of the coaches have expressed regret about signing up without a TV guarantee.  I heard many complaints about the broadcast, but obviously I didn't watch it, so I won't comment on that part of it.  It's my understanding that Coach Johnson signed up for this during his first year, in large part because of his connections with the Nets and he has a daughter that was (and maybe still is, I don't know) attending NYU.  All of that is reasonable, but he assumed the games would actually be played at Barclay's and they would be televised, as has been the case in the past.

For those of us who attend these things, knowing the location and start time well in advance is fairly important for planning purposes.  I had been checking the Barclay's Arena schedule for months, and noticed several other events (Nets game, NIT games) scheduled there for today, so had assumed our games would be later starts.  The actual time and location wasn't announced until about a month ago, and from what I understand that's the same time the coaches found out about it, and they were not too happy either.  My flight landed at EWR at noon, so I would have been screwed if we played the first game.  I still only made it with about 15 minutes to spare; thanks to my friend for saving me a good seat behind our bench.

With all due respect to LIU-Brooklyn, that gym is a terrible.  I can think of at least 5 high school gyms in the Birmingham area that are bigger and nicer.  It's a multi-purpose facility with removable fold out type bleachers, no seat backs, and only one entrance/exit.  There's no video screen for replays, and no displays for any stats other than what you see on the scoreboard (score, arrow, timeouts left, team fouls).  Frankly, calling this the "Barclay's Classic" and duping coaches into signing up for this thing was fraud.  I assume these games were scheduled for early afternoon so the promoter could get to his other job of selling "Rolexes" in Manhattan.  I find it hard to believe in all of New York City this was the best available place once they realized they overbooked Barclays.  They had one concession stand open, I took a look at the line and said "Screw it," but from others I understand they had a very limited selection and insisted on only accepting bills smaller than 20s.

I do want to give credit to the people working the ticket office.  I purchased my ticket through ticketmaster, and wrongly assumed I would be able to access a mobile ticket in my app, and thus did not print it out.  I didn't realize this until I arrived at the gate, but I showed my ID and receipt and they promptly printed me a hard copy ticket free of charge.

The arena only holds 2,500, and I would guess we had close to 1,000 fans there.  We had significantly more than BYU, and it felt like a home court advantage at times, with the coaches' wives leading the cheers.  The UA NYC alumni group does an outstanding job of supporting our teams when we are in the area.  I'm looking forward to watching the first quarter of the Iron Bowl with them tomorrow before I come back to Brooklyn for the basketball game.

Up next, the Barclay's Classic finally moves into Barclay's Arena where it will be a clash of undefeated, ranked teams, as Bama takes on number 14 Minnesota.  The Gophers are coming off a big win over UMass in the early game today.  Tip off is set for 5 pm EST tomorrow, and you can stream it on Facebook (lol).