Alabama drops to 6-2 on the season after a bad loss to a depleted UCF team.  Give credit to the Knights, they played great defense, made their open 3s, and found a way to get the win on the road over a top 25 team despite being short handed.

It was a strange game.  If you told me before the game that one team would shoot nearly 50% from 3 point range and win, and the other would lose despite having a post player go for 20 points, I would have guessed our roles would be reversed.

As frustrating as this loss was, there are a few positives to take away, but not many.  We actually played better in the first half for a change.  We had an 11 point lead at one point, but I thought we took the foot off the gas a bit at that point and got a little sloppy.  UCF was able to cut the lead to 6 by halftime.

We did a good job on Tacko Fall. Donta and Giddens fronted the 7'6" center to deny him the ball, and we used our quickness to get several turnovers when they tried to lob the ball into the post.  We also attacked him on the other end with Donta and Sexton going right at him and managed to foul him out after only 14 minutes of playing time and 6 points.

Donta Hall was a beast on both ends of the floor.  He finished with 20 points, several dunks,  and 4 blocks. Unfortunately, he did not have any help today.

UCF controlled the tempo in the second half.  Avery tried to press to speed them up a bit, but with a few exceptions they did a nice job of breaking the press but not taking the bait of getting into a running game.  UCF was held in the 40s their last two outings, but already had that many by early in the second half.  They shot 50% from 3 point range, and it wasn't a matter of them making tough, contested shots.  We must get better in our man to man defense.  We continue to mis-communicate or simply not execute switches on screens, and both Sexton and Petty are susceptible to over-reacting to quick directional fakes.  At some point, we've got to get back to the fundamentals of moving your feet to stay in front of the dribbler and not trying to anticipate every move hoping to make a big play.  Herb Jones can't defend everyone on the court. 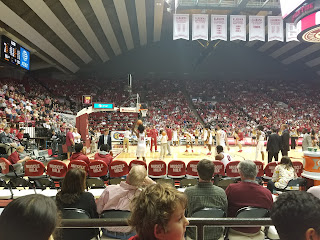 Sexton had his worst game so far.  UCF's guards did a good job of being physical with him, and when he missed a few shots I think he started to get frustrated a bit.  I do give him credit for setting up Donta and our other bigs with some nice drives and dishes.  I assume he had some blood on his jersey because he wore #14 for the second half.

Petty left the game briefly in the first half as it appeared he re-injured his ankle, but he came back in.  Personally, I wish we would have just sat him out until he's 100%.  He had a few nice looking 3s that went all the way in and came out.   In fact, Riley also had a couple of mid range jumpers do the same, and Ingram even missed some in the paint.  It was just one of those days.  Petty finished with 12 points, but also had some bad turnovers and was a liability on defense.  Dazon, Collin, Herb, and Petty all made some poor decisions with the basketball.

Despite trailing by 6 or so for most of the second half, we had a chance to win the game at the end.  Sexton tied the game at the line, and then Herb Jones took a charge with 25 seconds left.  Unfortunately, the replay showed Herb had a foot in the restrictive circle and the call was changed to a block.  They made a free throw to take a one point lead, and Dazon turned it over at the other end trying to get the ball to Hall.  Given the great game Donta had, and the fact that Tacko was on the bench with 5 fouls, I did not have a problem with the decision to try to get the ball to Donta on the block in that situation, but the execution was not good.

I do take issue with the last possession.  After UCF scored on a fast break to take a 3 point lead with a little over 12 seconds remaining, Sexton quickly got the ball into the front court.  I like that Avery seems to be giving these guys a lot of freedom, but I think he defers to Collin a bit too much at times.  Obviously I couldn't hear what was being said, but I think Avery wanted to call a timeout as soon as the ball crossed mid-court, but Collin seemed to say, "I got this," and proceeded to dribble into a triple team before calling a timeout with 2.8 seconds...a timeout that should have been called with about 6 seconds left.  Credit to coach Johnson for drawing up a play that actually got Petty a decent look to tie the game, but as was the story of the day, it wouldn't go down.

A good team must be able to overcome poor shooting nights and win these types of games.  We showed our youth today.  If we don't dramatically improve our fundamentals, start valuing the basketball and start moving our feet and communicating on defense, we are going to be discussing a 3 game losing streak this time next week.

The game took over 2 and a half hours due to several lengthy delays in the second half when the shot clock on the UCF end went out.  They turned them both off at that point and started announcing "20 seconds," "10 seconds," and "5 seconds," until it started working again 5 minutes or so later.  This is just another in a long list of embarrassing aspects of our facility that badly needs replacing and upgrading.

The crowd was the best I've seen so far this year, and it's unfortunate we couldn't capitalize with a victory.  I would estimate close to 12,000 were in attendance on a beautiful Sunday afternoon, and everyone was in a festive mood with the good news the football team received earlier this morning.  The crowd stayed till the end and remained positive and supportive throughout, but there were some quiet stretches with the slow pace of the game and all the interruptions.

Up next, the Rhode Island Rams come to Tuscaloosa for a 7 pm tipoff Wednesday night.  Rhode Island is almost certainly an NCAA tournament team, and they already have impressive wins over Providence and Seton Hall on their resume.  The game will be broadcast on SEC Network +
Posted by DJC at 7:33 PM