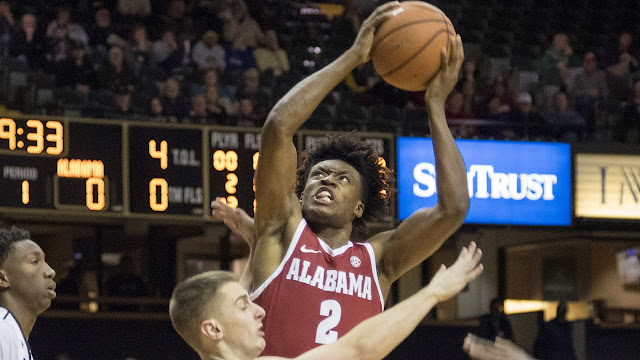 In the wake of another frustrating trip to Memorial Gym, the Alabama men's basketball team will hope to win a true road game for the first time this season when they travel to beautiful Athens, Ga to face the Georgia Bulldogs on Saturday. You couldn't have asked for better timing for this game as the two schools will meet for the national championship in football on Monday night.  Game time is 11 A.M. CT. SEC Network will handle the television duties. Alabama is 3-2 in their last five trips to Athens. Click the links (don't be shy) for team and KenPom stats.

My Two Cents: Basketball may only be served as the appetizer for the big football game on Monday night, but this game will nonetheless be very important for both programs. Both teams have solid, not great, non-conference resumes entering the game, along with 1-1 starts in conference play. A win here adds to the resume for two teams currently viewed as being on the bubble if the tournament was selected today. Furthermore, the winner avoids dropping below .500 in conference play. A conference by the way that looks bonkers if the early results are any indication. We're only one week into the conference season, but there is no clearcut favorite at the top of the league, and no team from 1-14 in the standings right now looks like an easy out. The winner(s) of this league race could have as many as six losses once it wraps up. This young Alabama team has to grow up and gel quickly or this conference will reduce a once-promising season to a bitterly disappointing one.

Players to Watch: I may have been in the minority on Tuesday night, but I wasn't as upset with the loss at Vandy as much as maybe I should have been. For one, I think Vandy is much better than their record; and, two, I thought Alabama played well despite John Petty scoring only two points. John is a great talent, and I think his ceiling is very high in all areas of the game. But right now, what this Alabama team needs from him is scoring. When John's shot is falling, this Alabama team is noticeably better because it forces opposing defenses to extend out to the 3-point line, opening up the floor for guys like Collin and Dazon to get into the paint and make plays. Keep an eye out for Herbert Jones in this one as well. With Riley now out for the season, I think Herbert's role on this team will begin to expand.

The Georgia frontline (Yante Maten, Derek Ogbeide and Rayshaun Hammonds) is stacked. In fact, a key stat in this game will be how Bama competes on the boards against Georgia's size. But, in my opinion, Georgia's ultimate success comes down to the play of their guards. They didn't exactly come into the season as a heralded group, but their play, particularly that of William Jackson II, is a big reason that the Bulldogs have overachieved to some extent up to this point. The Alabama gameplan must involve making those guys uneasy, not allowing them to find a rhythm with the big guys inside. If that happens, it's going to be a very long day in Athens.

Prediction: This is a similar matchup to the one with Texas a few weeks ago. No one on this Georgia team is a dominant presence like Mo Bamba is (very few are, to be honest), but with their size they could significantly control this game if  the pace is slowed and this becomes a half-court game. And another key aspect of that game with Texas was that their guards controlled the pace and shot the ball well. I think Alabama must come out early, set the tempo, and attack the Georgia guards in the open court in an effort to get them off balance, creating turnovers and transition opportunities. Make it a little chaotic, take Georgia (and their home crowd, which could be sizable as a result of the expectation of Monday night) out of their comfort zone. This Alabama team simply isn't capable right now of consistently producing points or defensive stops in the half-court against a team with Georgia's size. If this game is in the 50s or low 60s, be afraid. Be very afraid. Alabama - 73 - Georgia - 66

EDIT: No, you're not crazy. I've changed this prediction three times now.
Posted by MSmilie at 7:00 AM