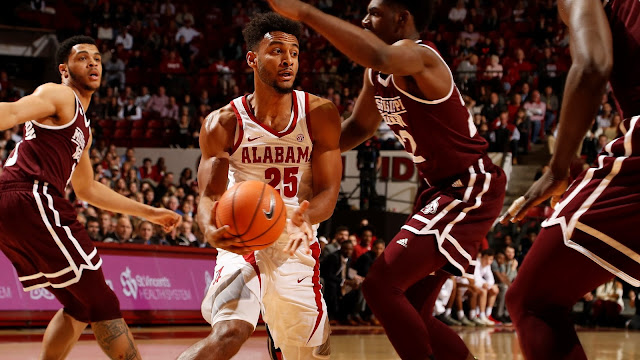 As DJC mentioned in his Mississippi State recap (scroll down!), the Alabama men's basketball team owns the SEC's longest winning streak at four games. They're also alone in second place with a 5-2 conference record. They will return to the road on Tuesday night when they travel to Oxford to play Ole Miss. The Rebels are 3-4 in conference play. Game time is 7:30 P.M. CT. SEC Network once again handling the television duties. Click those links for team and KenPom stats.

My Two Cents: Ole Miss struggled in home games in the nonconference, losing three of their nine games at home. They've been better in conference play, winning all three of their home games, including a win over conference leader Florida. They're 3-4 in league play, but lost their previous two games - both road games - by a combined six points so they could conceivably be 5-2 in conference alongside Alabama if the ball bounces a different way. You look at Ole Miss' talent on paper, particularly their guards, and I think they're better than their record suggests. With this Alabama team trying to manage its' way through a slew of injuries, that trip to Oxford on Tuesday night looks challenging to me.

Players to Watch: It was great to see Braxton Key have his best game of the season on Saturday night. One, because Alabama doesn't win without his contribution; two, because it's been such a struggle shooting the ball for Braxton since his return from knee surgery. To Braxton's credit, he did not allow his lack of scoring to affect other parts of his game. It all came together on Saturday night. Let's hope it's the first of many great performances for Braxton the rest of the way.

Prediction: Alabama has found a way to win four straight despite injuries to Donta and Collin. The team is showing grit, which bodes well for the future. And I think they're good enough to go to Oxford and give the Rebels some headaches.....but this Ole Miss team has been good at home in conference play, and they're a little older than this Alabama team, which could be important in this game. If Donta continues to be limited, and Collin misses more time, this is a game where it could finally make a difference. I think it comes down to the pace of the game. Alabama is tops in the league in defensive efficiency, while Ole Miss ranks near the bottom; but these teams are similar in terms of offensive efficiency. The second half vs Mississippi State though was a stark reminder that this Alabama team can still get bogged down on the offensive end. If that happens against a steady Ole Miss offensive team, things could get bleak in a hurry. Tough game to call. I think the efficiency numbers actually favor Alabama in this matchup, but I'm going to go with the more experienced team at home to end Bama's winning streak at four. Ole Miss - 90 - Bama - 85 (in double OT)
Posted by MSmilie at 7:00 AM