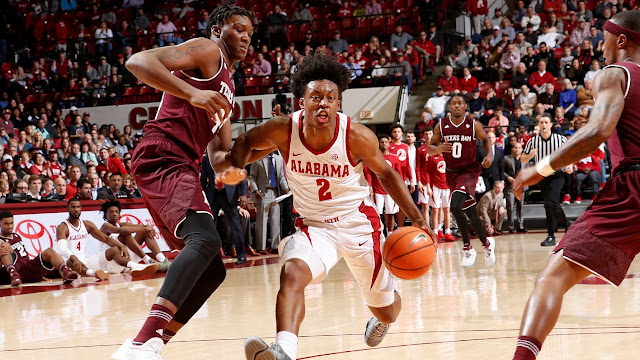 The Alabama men's basketball program will seek a 2-0 start in league play for a second straight season when they travel to Nashville on Tuesday night to face the Vanderbilt Commodores. Game time is 6 P.M. CT. The game will be televised on the SEC Network. Click the links for team and KenPom stats.

My Two Cents: Both teams challenged themselves in non-conference play with mixed results. Vandy enters this game at 5-8 overall; but, like Alabama, they've played a top 25 schedule, making it difficult to judge this team by their record alone. It's also important to remember that Vandy's record was 6-6 a season ago entering conference play, but they were able to play their way comfortably into the tournament nonetheless. And as all Alabama fans know, Memorial Gym has been a nightmare for Alabama for decades. The win vs A&M this past Saturday was exciting, and it showed that this Bama team has some fight in it. Now it's time to see how this young team (made even younger by the fact that Riley Norris will miss the remainder of the season with a hip injury) handles back to back road games. As always, defending the 3-point line will be crucial vs Vanderbilt. If you go back and watch the A&M game closely, the Aggies got plenty of open jump shots, they just didn't make them. Vanderbilt will make those shots in Memorial.

Players to Watch: After struggling against Texas in his worst game of the year, Donta Hall found himself facing off against the elite duo of Tyler Davis and Robert Williams. Donta held his own, finishing with 17 points on an efficient 7-8 from the field. Plus, he made all three free throw attempts. He also added 6 rebounds and 2 blocks. He's been a very important part of the team this season, going from being a raw but talented role player to a guy who may have a legit shot at being drafted in June if he continues his progression. Post play has not been a strength for this Vanderbilt team so far. Donta and the other Bama post players could have a big impact on this game as a result.

Jeff Roberson is the leader for this Vanderbilt team, and one of my favorite players to watch in the league. He's had a great senior season so far: 14.7 ppg (45.2% FG, 41.8% 3-pt, 91.4 FT), 8.2 rpg, and 1.0 apg. Matching up with him will be a challenge because of his versatility. He can beat you from the perimeter, driving to the basket, and he's the most consistent option in the paint for Vandy at the moment. His numbers will likely say a lot about how this game goes.

Prediction: Alabama's performance this past Saturday was encouraging on the heels of that terrible performance vs Texas. If our guys can stay healthy, continue to improve, this team is still capable of ending the program's NCAA Tournament drought. But winning road games in the SEC this season is going to be tough. It's going to be even tougher when you consider how young this Alabama team is. KenPom has an experience ranking. Out of 351 teams, he has Alabama ranked at 347 (only Kentucky is younger in the league). I don't care how talented you are, when your team is that young, they're going to have some ups and downs all season, but certainly in road environments. And Vanderbilt still play their home games in Memorial Gym. Alas, Vanderbilt - 73 - Alabama - 71
Posted by MSmilie at 7:41 PM