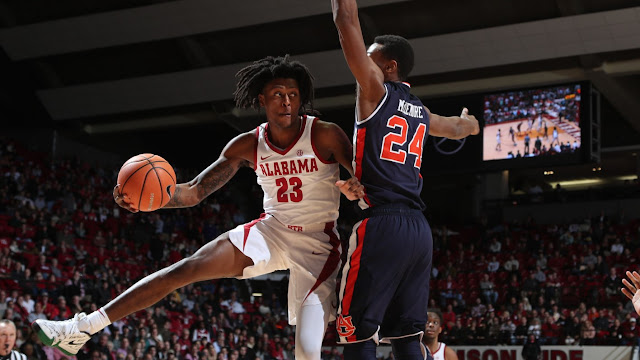 The Alabama men's basketball team has won three straight games and are now 4-2 in conference play. They will look to keep the good times going on Saturday when they host Mississippi State in Coleman Coliseum. The Bulldogs enter with a 2-3 conference record. Game time is 7:30 P.M. CT. Once again, SEC Network will televise the game. Click the links for team and KenPom stats. Make sure to wash your hands first.

My Two Cents: What's that old cliche: sports can mimic life. I'm paraphrasing....actually, I have no idea if there is a cliche about sports and life, but you get the point. Life can be a terrible experience at times, gut-punching you for days, or even weeks or months, until you wonder if things can ever swing in the positive direction. And then it does swing in that direction for a while, and you remember that life can be spectacular. And then it all goes wrong again, but you make your way back to the other side. Rinse, repeat. It's the experience that the unconscious mind seeks, be it good or bad. But it's all necessary to have a true understanding of what makes life worthwhile.

Now let's apply that to basketball. It was just thirteen days ago that all of us were in the dumps following Alabama's rough outing in Athens. We were very critical of the coaching, and the fact that Alabama could miss the NCAA Tournament despite having the most talented roster in a decade at least. It seemed that there was no bright light at the end of that tunnel. And this season is far from turned around, but the team has shown some toughness during a crucial five game stretch by winning the first three of those games - one on the road, another vs a ranked opponent - despite having to continue dealing with injuries. Avery Johnson and his staff have done a good job of managing the roster and making good in-game adjustments in an effort to overcome the lack of a fully healthy roster. Things aren't perfect at the moment, but the clouds aren't as dark as they were just twelve days ago. And the beat goes on la de da de da.....

Alabama is coming off their best win of the season from a resume standpoint. Auburn was ranked in the AP, KenPom and RPI top 25 entering that game. And it felt good to see Alabama end Auburn's 14-game winning streak, and 2-game streak over Alabama. And they did this with no Collin Sexton, sitting out with an abdominal injury, and a limited Donta Hall, somehow suiting up to play just days after wrist surgery. The team has overcome some adversity, but I'll feel a lot better if they can get healthy before the stretch run of the season arrives.

Coming off a big win on Wednesday night, can this young Alabama team avoid a letdown at home on Saturday? Mississippi State appears to be a program that is still in the building stage in year three under Ben Howland, but it's a well-coached team with talent of its own. It was just two years ago in Howland's first season that State knocked off Alabama in Coleman, halting momentum that team had built for a possible NCAA Tournament bid. With a big crowd expected for Saturday in the wake of the football championship parade, this Alabama team needs to show up and play at a high level because that's what winning programs do.

Players to Watch: I thought Herbert Jones had his best game in an Alabama uniform vs Auburn. He finished with 11 points on 5-9 from the field, 7 rebs, 4 asts, 4 stls and a block, while also running the point for long stretches during the second half. Herb's only going to get better, and it should be really fun to watch him develop over the next several years (if we're lucky enough to watch him do it in a Bama uniform, that is).

If Ben Howland is able to build Mississippi State into a consistent top 25 program down the road, Quinndary Weatherspoon will be the primary guy that laid the foundation. Quinndary has been a great player through two full seasons in Starkville, and he's once again the top player for this squad as a junior (14.6 ppg, 5.6 rpg, 4.1 apg, 1.4 spg). Also keep an eye out for his brother, Nick Weatherspoon (10.5 ppg, 2.9 rpg, 2.3 apg, 1.0 spg). He's expected to play Saturday after a foot injury scare that required an MRI.

Prediction: Both teams are in the top half of the league in defensive efficiency (Bama - 2nd; State - 6th), and in the bottom half in offensive efficiency (Bama - 8th; State - 11th). That leads me to believe that Saturday's game could be a low scoring affair.....or I wouldn't be surprised if Alabama, energized with confidence and (hopefully) a big crowd, has a blowout victory. However it goes, I like the toughness this Alabama team is displaying, and the game is in Tuscaloosa so I'll go with our guys to pick up their fourth straight win. Bama - 72 - Mississippi State - 64
Posted by MSmilie at 7:00 AM