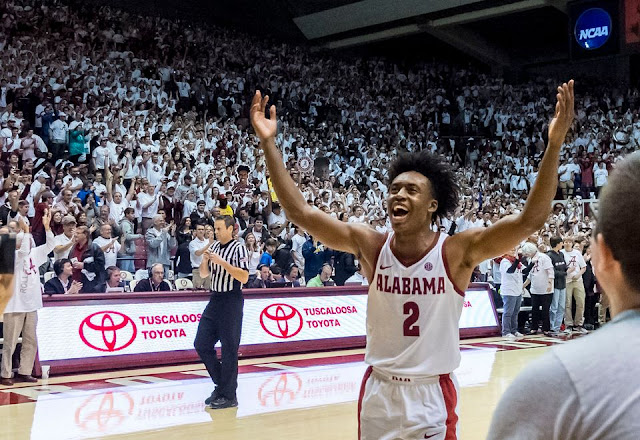 On the heels of the biggest win of the season, the Alabama men's basketball team will look to keep the good times rolling on Wednesday night when they host the Missouri Tigers. Alabama resumes conference play with a 5-3 record, while Missouri is looking to get back on track after falling to 3-5 in conference play following a loss at Mississippi State on Saturday. The Tigers have lost three straight and four of their last five. Game time is 8 P.M. CT. ESPN2 will handle the television duties. As always, click the links for team and KenPom stats.

My Two Cents: As fun as Saturday was, I'm ready to see how this young Alabama team handles success. Saturday's win was not only big for this season, but a great win for the program as Avery Johnson continues to build it. This team has to feel good about themselves, but does it come at the expense of the focus that it took to reach the level of improvement that we've seen in the last few weeks? It's important to remember this is a program that is still learning how to win consistently. Missouri enters this game 3-5 in league play, and are in desperate need of a win to keep themselves in the NCAA tournament discussion. We've seen both ends of the spectrum with this Alabama team. They're talented enough to beat anyone, but we've also seen them play so poorly that they can lose to anyone as well. Missouri is still ranked in KenPom's top 50 so overlooking them would be a mistake. Alabama needs to put the Oklahoma game in the rearview mirror and come out ready to play Wednesday night.

Players to Watch: Herbert Jones picked a great time to have his best game of the season. Fifty-seven NBA scouts were on hand Saturday to watch Trae Young and Collin Sexton, but I'm sure more than a few of those scouts took note of Herb's play, particularly his defensive effort against Young. I don't think Herb is going to shoot up draft boards this season (I'm guessing scouts would like to see him get stronger and develop his jump shot first), but if he continues his steady development through this season and into the summer, he could be a breakout player next season, and a potential draft pick. He's blessed with length, athleticism, and what appears to be a strong basketball IQ. The sky is the limit for this young man. I'm glad he's on our side.

Kassius Robertson has been a pleasant surprise for the Tigers. The grad transfer from Canisius is leading Missouri in scoring at 15.7 ppg, and is a dangerous 3-point shooter (41.2%). He's also second on the team in assists (2.1), and steals (1.0). He's playing like a guy with one season left in his college career that's trying to make the most of that one season. And while the Tigers lost star freshman Michael Porter, Jr. to an injury in the first game of the season, his brother, Jontay Porter, has been a good addition to this Missouri program. He's leading the team in rebounds (6.6), is a good passer (2 assists per game), and is capable of stepping outside of the paint and knocking down perimeter shots when necessary. His best years are likely ahead of him, but he's good enough right now to give our guys some headaches on Wednesday night.

Prediction: Missouri averaged 77 points through their first two conference games, but in their following six games, they're averaging just 62.3 points per game. If Alabama continues to play at the high level on defense they've displayed in conference (still tops in conference-only defensive efficiency at KenPom), Missouri's scoring woes may continue. I think Alabama matches up fine. My concern remains the mindset of this team coming off their biggest win of the season, and how prepared they are to play a team that desperately needs a win to avoid a four-game losing streak. Young teams struggle to play at a consistently high level, resulting in playing to the level of their competition some nights. Something to keep in mind if this game is close down the stretch: As a team, Missouri shoots 75% from the free throw line.

My optimism lies in the fact that Alabama not only played well on Saturday against a top 15 team, but they also looked as healthy as we've seen them in many games. Collin had his explosiveness back, Donta did not look limited by his wrist, and Braxton is putting consistent efforts together now. We've been saying all season that if this team could get close to 100%, they had a chance to be a really good team. The final ten games on the schedule are daunting, but not impossible to navigate if this team is healthy. Assuming they're healthy and focused on Wednesday night, I feel confident that our guys will continue to play well at home (10-1 so far this season). Missouri keeps it close, but a late run is the difference. Bama - 73 - Missouri - 62
Posted by MSmilie at 7:00 AM