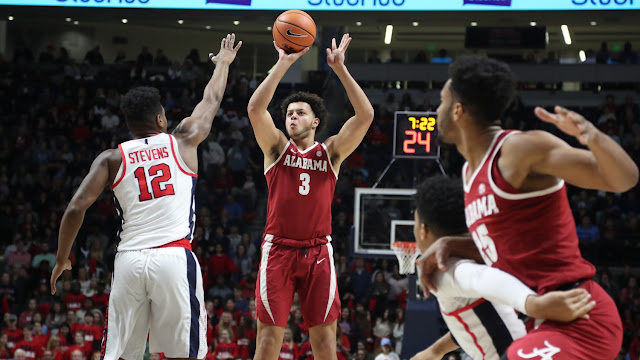 The Alabama men's basketball team is coming off a disappointing performance in Oxford, but they have no time to linger on that game because the 12th ranked Oklahoma Sooners are coming to town on Saturday as part of the Big 12/SEC Challenge. This will be the biggest non-conference game in Coleman in many years; not only because Oklahoma is ranked, but because they have the frontrunner for national player of the year, Trae Young. The university has announced that the game is a sellout. Game time is 1:15 P.M. CT. ESPN will televise the game. Click the links for team and KenPom stats.

My Two Cents: Social media was rife with angry Alabama fans following the loss to Ole Miss. I get it to some extent: the hype for this team entering the season was the highest it's been in many years. At 13-7 (5-3), there has been a fluctuation among the fans of how good or bad this team is. The thing to remember is that all of the goals for this team are still possible. The team is only two games out of first place in conference play in a league with no elite team, and many bracketologists have the team projected in the NCAA tournament field.

Something that I think is being missed by some fans upset with the program at the moment is that this is one of the youngest teams in the country. KenPom has Bama ranked 348 out of 351 teams in terms of experience. They've also played a top 20 ranked strength of schedule. When you look at it from that angle, one of the youngest teams in the country being 13-7, two games over .500 in conference play, and currently projected in the NCAA field isn't the worst thing in the world is it? Does this team have talent? Yes. Talent is important. You can't win long or short-term without talent. But even more important than talent is experience. Kentucky has a hall of fame coach, and five star recruits dotting their roster, but they're also the youngest team in the country in those same KenPom rankings. Lo and behold, they're struggling, and Kentucky fans are freaking out without stopping to think how young this team is and how difficult it is to win road games in conference play with experienced players. Alabama fans just need to breathe, take it one game at a time, let this season play out, and let's see where things stand at the end.

If Alabama can upset the Sooners on Saturday, it would be a huge boost to their NCAA tournament resume. The funny thing about young teams is they typically play better at home, in front of supportive fans. This Alabama team should have the most support they've seen all season on Saturday. When these sellouts are announced, I always smile to myself because it means tickets sold, but it doesn't always mean butts will be in seats. The crowds have been good this season, even during some of the struggles, which is a good thing to see. Saturday should be special, though. If Coleman is going to truly reach capacity, it will be Saturday. The greatest atmosphere I ever experienced in person at Coleman was back in 2002 when Alabama beat Florida at the buzzer, courtesy of Antoine Pettway. The arena was a powder keg that blew when Pett made that shot. I was hugging complete strangers, and the energy from the crowd around us knocked my father to the floor (he was okay). I expect that kind of energy will be there on Saturday; and if Alabama can get off to a good start and play a strong 40 minutes of basketball, it should be a fun time for all in the grand old building. Let's hope it ends in a win.

Players to Watch: It goes without saying that it's going to take a total team effort from Alabama to knock off Oklahoma, but it wouldn't hurt if we saw Collin Sexton play at his A level. Collin returned to the court on Tuesday night after a two game absence due to an abdominal injury. He played twenty minutes, and had arguably the worst game of his college career. He went 2-13 from the field, finishing with only 7 points. Surprisingly, he did not turn the ball over (per the box score anyway), but it was still a rough night for him. The Ole Miss student section treated him to chants of "overrated" as a result. We all know Collin isn't overrated, but games like Saturday demand great performances from your top players. Collin has to rise to the occasion on Saturday.

Duh, it's Trae Young. He's the frontrunner for national player of the year. He's leading the nation in points per game (30.3). He's leading the nation in assists per game (9.6). He's top five in the nation in field goals attempted. He's a projected lottery pick. He was efficient in the Sooners win vs Kansas on Tuesday, scoring 26 points with just nine field goal attempts. He also dished out 9 assists. He has elevated this team around him, and the sky is the limit for how far this Oklahoma team can advance in March if Young is performing at a high level, and getting consistent help from his teammates. It will be fascinating to watch how Avery and his assistant coaches gameplan for Young. One thing Avery has done consistently well during his tenure is come up with successful gameplans with his staff to limit the opposing team's best player.

Prediction: The Sooners play one of the fastest tempos in college basketball. They're also efficient, currently ranked in the top 15 nationally by KenPom in offensive efficiency. They're not great defensively, but some of that is because their pace creates a lot of shots for them, but also a lot of shots for their opponents. Some nights those opponents shoot well, which inflates the numbers. I'm not sure our guys can stop Oklahoma from playing at the pace they want to (Alabama's roster this season isn't really built for slowing the game down anyway). This means Alabama will have to be very good in their transition defense, and they have got to defend the 3-point line, which has been an issue for them at times this season. Alabama must create turnovers, protect the ball themselves, win the rebounding stat on both ends (you've got to do whatever you can to limit Oklahoma's possession and shot count while continuing to be aggressive), and be efficient from the field and free throw line. Hoping to beat Oklahoma by scoring in the 60s or 70s probably doesn't get it done. Our guys probably have to score in the 80s, maybe even the 90s, to put themselves in a position to win. It's going to be a tremendous challenge.

Oklahoma is the better team, but the game is in Tuscaloosa, in front of what should be an awesome crowd. If the team embraces this opportunity, I think they've got a chance to win this game. They will have to play the best game they've played all season to do it. Are they ready for this? They've played a top 20 schedule. They've been in close games against mid-majors, been humbled in a few games, played at a national power in Arizona, have gone through the ups and downs of conference play, but also won four straight games despite not being completely healthy, including handing the lone conference loss to the league leader, Auburn. Our guys haven't seen a team quite like Oklahoma, but this Alabama team is battle-tested. And that is why I think Alabama is going to win this game Saturday. I've been disappointed before when having high expectations for games, but my gut feeling is that this is going to be a spectacular game with big plays on both sides, tension, highs and lows. It could be the best game of the challenge when all is said and done. For those of you in attendance, I envy you. I hope you have a great time, and I hope you witness a Bama victory. Bama - 93 - Oklahoma - 88
Posted by MSmilie at 7:00 AM