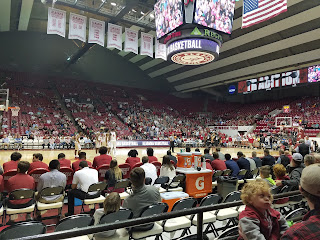 Alabama protected its home court in convincing fashion against South Carolina to improve to 2-2 in SEC play.

Coach Johnson went with a big starting lineup of 1. Collin 2. Herb 3. Key 4. Hall 5. Dan.  Many of us have been hard on CAJ lately, but let's give him credit for coming up with a great game plan.  South Carolina is a big, physical team.  MSmilie's preview was spot on, they want to pound it into the paint and they need Silva to stay on the floor.  The staff apparently did a good job of scouting because they seemed to realize that while Silva is a beast, their other bigs are stiffs.  Going with our bigger lineups, we were able to create and take advantage of some mismatches and actually win the rebounding battle.  Dan, Donta, and Galin combined to go 14 of 15 for 30 points and 12 rebounds.  We attacked Silva and were able to foul him out of the game.

The successful post play opened things up for the wings, and JP came in off the bench and scored 15, going 3 for 6 from 3 point range.  We were 7 of 17 as a team from downtown.

It was a physical game and the officials let them play, particularly in the first half.  One would think that would be an advantage for South Carolina, but I think it actually helped us keep Dan on the floor while he was having a productive game.  Carolina's physical defense and frequent double teaming of Sexton on the drive limited his offensive game, but I thought he did a lot to create opportunities for others.

We built a 17 point lead in the first half, but a scoring drought, a flurry of turnovers, and some more bad perimeter defense allowed Carolina to cut it to 7 by halftime.  We were able to speed up the tempo for a stretch in the second half and stretch the lead back out to 20, and the game was never really in doubt.

I've been critical of AJ's playing time, but he was a difference maker in this game with Sexton in early foul trouble and otherwise struggling to score.  AJ ended up with 10 points and 2 assists in 16 minutes.  Key played better, with 7 points, 5 assists, and 6 rebounds in 22 minutes.  He was much better off the ball, but still had some terrible turnovers.    Dazon returned and played 17 minutes off the bench, and while he only had 4 points and 3 rebounds, I thought he contributed a lot on defense.

The whole team struggled with turnovers, 18 will get you beat against most teams in this league, and we still had a few more defensive lapses than I would like, but overall it was a solid performance and I thought the guys gave a good effort.

The crowd was extremely sparse, I would guess no more than 4,500 were actually there, and it was pretty quiet most of the night, even with the big lead.  The student section was about half full.  How much of that was due to the 6pm Tuesday tipoff time and the hangover from Monday night's football National Championship versus the fan base's reaction to recent performances against Texas and Georgia remains to be seen.

Up next, we travel to Baton Rouge to play a much improved LSU Tigers team this Saturday night at 730 pm central.  It will be televised on the SEC network.