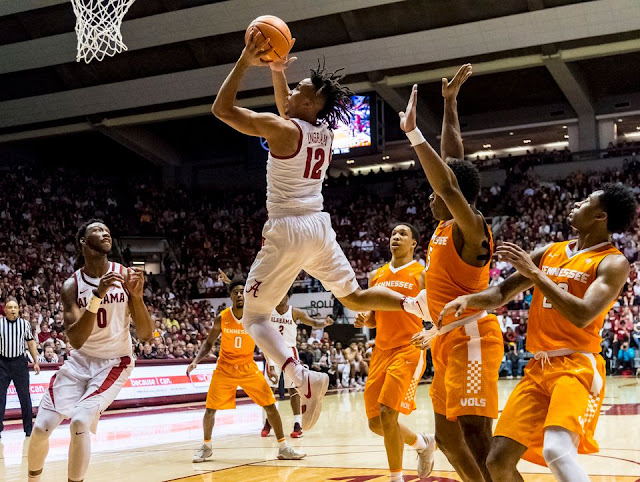 After their fifth win over a ranked opponent this season, the Alabama men's basketball team is looking to avoid another midweek letdown when the LSU Tigers visit Coleman Coliseum on Tuesday night. Alabama enters with a 7-5 record, tied with Missouri for fourth in the league standings (Missouri owns the tiebreaker). LSU enters with a 5-7 league record. This will be the second meeting this season; Alabama won the first meeting in Baton Rouge, 74-66. Game time is the dreaded 8 P.M. CT slot. SEC Network will televise the game. Click the links for team and KenPom stats.

My Two Cents: This young Alabama team has been very good under the bright lights in big games this season, but it's faltered when playing in the less-heralded games. Some of those struggles are due to the improvement of the league this season, but it's been clear in losses such as Missouri and at Mississippi State that the team isn't always locked in as a unit for those types of games. The next step for this team with four weeks left in the season is to find a way to generate the necessary focus and intensity to carry over from big performances such as Saturday when the team played arguably its finest game of the season. LSU is a solid team that has legitimate postseason hopes, despite being picked 14th in the preseason poll. This Alabama team is very close to having a resume in place that I think will result in the program breaking its six year NCAA Tournament drought. If the Alabama fanbase is serious about supporting this program it needs to be there for a young team that has clearly thrived when fans have been in attendance and are loud and supportive.

Players to Watch: The development of Donta Hall as both a player and a leader for this team has been one of the pleasures of this season. Donta came to Tuscaloosa as a very athletic player with a high motor, but he was very raw. He was also very quiet. The staff, particularly John Pelphrey, have done a tremendous job working with him over the last two years. And it's paid off this season. Donta is one of the top players, and he's been willing to be a more vocal presence on a team that has sorely lacked one at times. Donta has shown a lot of toughness as well. He's played with that injured wrist for weeks, despite possibly re-injuring it in the game at Starkville. That kind of toughness and leadership can inspire teammates, and it will be instrumental if Alabama can get across the finish line and make the NCAA Tournament.

Duop Reath is another big man that has been a leader for his team. The senior is ending his college career on a high note, averaging 14.2 ppg and 5.4 rpg. He's coming off a monster game vs Ole Miss in which he finished with 26 points and 5 rebounds. He's had two instances this season in which he's scored 30+. And though he doesn't take many, he is leading his team in 3-pt % at 44.8. His matchup with the Bama bigs will be something to keep an eye on.

Prediction: Let's look at the games after Alabama's biggest wins this season (Rhode Island, Texas A&M, Auburn, Oklahoma and Florida). Alabama has only followed one of those wins (Auburn) with another win (Mississippi State). It's clear this team struggles to follow up big wins with consistent efforts. Is the trend doomed to continue Tuesday night? Well, it's not helpful that the game tips at 8. Fans have struggled to fill the seats for those games, and those that do show up are not always the most vocal. That has filtered down to the team, though it is unfair to blame inconsistent performances solely on a poor home environment. At some point this team has to grow up and just find a way to win games when the home crowd isn't as vocal or the opposing team doesn't have a number next to their name.

At this point in the season it's hard to believe a team will snap a trend so I don't expect Alabama to play at the level we saw Saturday, meaning this game will probably be closer to most of the mid-week games we've seen in conference play. LSU is a solid team that has a lot to play for. They've got a great shot to play in a postseason tournament with a strong finish to the season. A road win at a top 50 RPI Alabama team would be big for an LSU team with its next two games at home. I expect Bama's trend of mid-week struggles to continue, but this time they overcome the adversity and get the home win vs LSU. Bama - 76 - LSU - 72
Posted by MSmilie at 7:00 AM