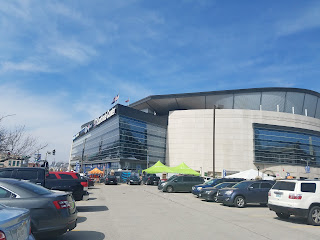 Despite the lopsided score, Alabama did not play that badly.  They just ran into a more talented team who played almost perfectly.

We were short-handed with Donta Hall out due to his head injury, and went with a starting lineup of Collin, Herb, Dazon, Alex, and Smith.  I was a little surprised that Alex started over Key.

It was obvious our game plan was to pack the lane and try to keep the Cats off the boards and away from the rim.  We played a lot of zone and soft man, generally going under screens.   With our primary rim protector out, and UK generally known as a big but poorly shooting team, it was a reasonable approach, and I would have done the same thing.     It worked, for a while.  The first 10 minutes or so of the game were an ugly, low scoring slugfest.  Unfortunately, we really struggled to hold on to the basketball and get good looks at the basket.  Most of the credit for that goes to Kentucky, they are a very good defensive team when properly motivated.  They finally started making some shots and stretched the lead to 10 at 29-19 going into the half. 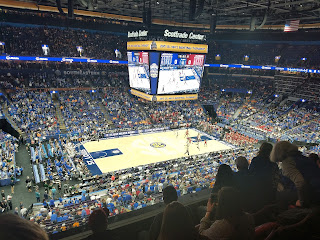 Kentucky shot 84% from the field in the second half.  Gabriel was 7 for 7 from 3 point range.  One can argue we should have switched defenses sooner, but it would not have mattered.  That's the game of basketball, sometimes a team defies their scouting report, and when that team is more talented overall to begin with, there's just not much that can be done.

I thought the effort was outstanding, and there were a couple of positives we can take from this game heading into next week.  UK is a great rebounding team and we actually controlled the boards, which is especially impressive given Donta's absence.  We had 13 offensive rebounds to their one, but of course, they simply didn't miss many shots.  Dan led the way with 7 rebounds, and I was very pleased with his effort and strength displayed by often securing the basketball in traffic.  Key was too tentative offensively in my opinion, but he did his work on the glass and got 5 rebounds.  Collin was playing like his hair was on fire, and ended up 5 rebounds to go along with his 21 points.  Despite being double teamed much of the night, he kept us in the game as long as he could.  He seems to be taking his game to another level in March, and that gives me a lot of excitement going into the NCAA tournament. 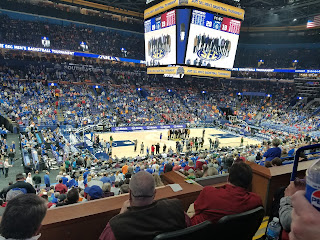 The team did not quit when UK pushed the lead to 17 in the second half.  John Petty responded in a big way, and we started pressing aggressively with Collin and AJ in the back court, which forced a few turnovers.  Petty was draining 3s from NBA range with a man in his face, and that opened things up a bit for Collin.  We managed to cut the lead to 9, but UK answered with more 3s of their own, and that was that.

JP finished 5 for 9 from 3 point range and 18 points.  If he can continue to shoot like that, and we get Donta back and healthy, and Collin continues playing as his recent level, we could be a tough out for somebody.

At the end of the day, this was a hugely successful tournament for Alabama.  We found a way to win a close one to keep the season alive, and then did exactly what was needed in convincing fashion to secure a tournament bid.  Sure, I would have loved to see us cutting down the nets today, but if this loss keeps us on the 10 seed line instead of the 8 or 9, it will be a blessing in disguise.  Personally, I'm sort of glad I was able to drive home last night so I can rest today and watch the selection show from the comfort of my own home and make plans accordingly. 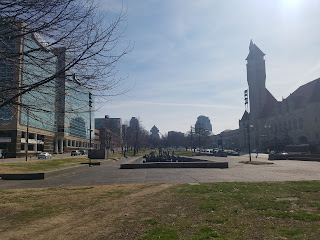 Obligatory Arch Pic.  I know it's distant, but I've seen it plenty before and had no motivation to go down there.

I'm still not a fan of having this tournament in St. Louis.  Scottrade Arena is not a bad venue, it holds about 18,500 and was 80% full for this game.  We had a decent crowd of maybe 1,000 or so scattered throughout, but it otherwise felt like a UK home game.  The sight lines are good and the large scoreboard gives a lot of information along with a good view of video replays.  We watched the first 10 minutes or so in our seats in the 300 level, but then moved down to some open seats near my friend directly below us in the 100 level.  There are only a couple of escalators connecting the two levels, so it took a while to walk around, and there are no televisions on the concourse so we watched a portion of the first half standing in a portal.  Also, the scoreboard operator made a few mistakes, only putting up 2 points on a 3 or not putting made free throws on the board, and PA guy several times announced wrong information such as "fouled on the shot" when it was on the floor or "shooting one and one" when it was a 2 shot foul.  Moreover, it just isn't a focus of the city like it is in Nashville, New Orleans, or Atlanta.  The locals really didn't seem to follow it or care, and part of that is probably due to Mizzou's early exit.  St. Louis is not a southern town, and it really isn't a college sports town.  Honestly, it's not much of a sports city in general.  They will support their Blues when they are willing, but the only thing they are really passionate about is their obnoxious, cheating baseball team.

Up next, today is the most wonderful day of the year.  It's Selection Sunday, and it's almost unanimous among the experts that for the first time in six years we are going to see "Alabama" on the screen this afternoon.  The season has had it's ups and downs and been disappointing in some ways, but I for one am proud of this team for finding a way to keep playing meaningful games when everyone counted them out.  5 pm can't get here soon enough.  Just a reminder that it will be televised on TBS this year as opposed to CBS.