No Hope Against 'Nova, Villanova 81 Alabama 58

Alabama's season came to an end with a blow out loss to #1 seed Villanova in the second round of the NCAA tournament. 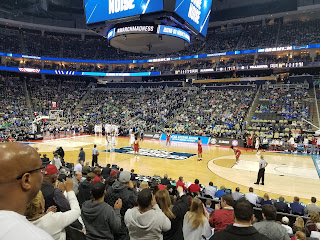 We hung with them for a half, but they were just way too talented and they weren't missing their shots.  We probably could have defended the perimeter better in the second half, but it would not have mattered.

The Wildcats got off to a slow start and allowed us to hang with them in the first half.  With the exception of Divencizo, their shots weren't falling and they had some foul trouble.  We also had to deal with foul trouble as both Collin and Herb picked up a couple early.    If we could shoot free throws, we could have been tied or leading at the break.  The end of the first half and beginning of the second was the key to the game.  We were really struggling to get open looks against their long, athletic defense, and psychologically I knew if the lead got to double-digits it would be practically insurmountable.

We managed to scrap to within 2 in the final minute of the first half, but Divencizo made his Fifth 3 of the half, with a hand in face,  at the buzzer to stretch the lead to 5.  Nova got the ball to start the second half, scored to push it to 7, then following a Braxton Key turnover, Herb picked up his 4th foul by hacking a 3 point shooter.  Bridges made all 3 free throws, the deficit was 10, and our best defender was relegated to the bench, and for all intents and purposes the season was over at that point.

Collin Sexton played well with 17 points, but is taking some criticism in the media for ending the season on a technical foul for trash talking late in a blowout loss.  For starters, I don't think calling someone a "little bitch" should warrant a technical at the college level, especially in that situation.  Secondly, I don't have a problem with his actions here.  I appreciate the fact that he was still competing at that point and looking to get an edge anyway he could.

We emptied the bench and Lawson got 3 assists, including an incredible behind the back, no-look pass to Dan Giddens for a dunk.  Otherwise it was all Villanova with Bridges and company bombing 3s and slamming dunks the whole second half.

The arena was nearly packed, with about half the crowd rooting for Villanova, and the Duke and Rhode Island fans mostly watching with disinterest.  There were several local Pitt/Penn State/WVU fans sitting in our section who mostly started cheering for us.  Again, our small crowd was VERY positive and enthusiastic, especially in the first half.  All of the players and coaches waved to our section acknowledging us after the game, we gave them a standing ovation and the "Roll Tide" chant as they walked off the floor for the final time this season.

Braxton Key's father was sitting in front of us, and after speaking with him, I'm much more optimistic about Braxton returning next year.

Thanks to the City of Pittsburgh for being wonderful hosts.  The venue was perfect, and it's a beautiful, clean city, and the locals could not have been more welcoming.  Even the police went out of their way to speak to the visiting fans.  I hope I have a reason to go back there soon.

Up next, the offseason.  It's certainly been an up and down year, and even with the disappointing performance, making the tournament and winning a game is good progress for our squad.  There's certainly cause for both concern and optimism at this point.  I will have my annual end of season recap and state of the program manifesto posted sometime this week before I turn my attention to baseball season for the next few months.
Posted by DJC at 3:12 PM