Alabama advanced to the second round of the NCAA tournament for the first time in twelve years with an 86-83 win over Virginia Tech. 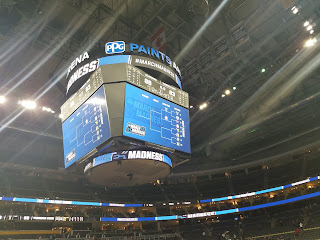 It was a slugfest of a game that neither team was able to fully take control of.  The score was within 5-6 points either way until the final minute.  Our guys relentlessly attacked the basket and finally got them in foul trouble and wore them down in the second half.

Things did not look good in the first half.  Buzz schemed to limit Sexton's touches, and he had only 3 points at the half.  To make matters worse, Virginia Tech was shooting over 60% in the first half, including a ridiculous 7 of 9 from 3 point range.  Despite all of that, Petty made a basket at the end of the half to send us to the locker room only down 2.

Collin was a beast in the second half and ended up with 25 points, including going 10 of 14 from the charity stripe.  Donta did not look 100% to me, but he still played 25 minutes and ended up with 10 points and 3 rebounds.  Dazon had a nice game with 9 points and 7 boards.  AJ played very well with 8 points in 10 minutes, and I thought he was crucial in keeping us in the game during the first half after Collin picked up a couple of early fouls.  JP was the MVP in my opinion with his 6 of 8 shooting for 20 points.  Key really struggled, he had one rebound, four fouls and did not score in 17 minutes of playing time.  He's got to be more aggressive on the offensive end.  He is playing tentative right now.

Dazon got the benefit of a block/charge call in the final minute when we were clinging to a 4 point lead.  Buzz lost his cool and was hit with a technical foul, which allowed us to finally stretch the lead to 7.  While we only made 18 of 27 free throws, we converted enough down the stretch, and got a few stops on defense to put the game away. 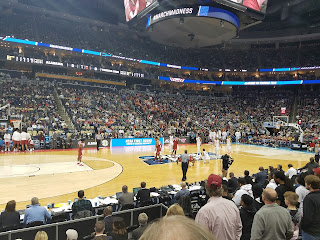 It was a great win for the team and program, and anything we accomplish beyond this point is gravy.  If we're going to continue playing next weekend, we will have to defend the 3 better, limit the turnovers, and get another great performance from Sexton and Petty.  It's a tall task, but not totally impossible.

PPG Paints Arena is a nice venue that holds around 19,000.  It was nearly packed for the Villanova game, but probably a third left before our game tipped off.  We were probably outnumbered 3 to 1, but I would say half of the crowd was neutral observers from fans of other teams.  Villanova clearly brought the most fans, followed by Duke.  While we were outnumbered, I don't think we were out yelled.  Our little section was very vocal, to the point I'm actually a little hoarse today, and I never lose my voice.  The team seemed appreciative and all came over and acknowledged us after the game.  It was great to see President Stuart Bell and Athletics Director Greg Byrne in attendance.  Byrne actually went through the crowd shaking hands.  He introduced himself to me, shook my hand, and said "thanks for making the trip."  I thanked him for supporting basketball and he seemed appreciative.

Up next, we face top seeded Villanova tomorrow at 12:20 EDT.  The game will be televised on CBS.  Honestly, it's hard for me to see us pulling off the upset, but if Buffalo can beat Arizona, anything can happen.  It's that time of the year, and after today we will be one of only 32 teams still playing meaningful basketball.  Enjoy this, it's been far too long, and we deserve it.  If anybody is thinking about making the trip (or local alumni reading this) I will likely have an extra ticket to the game, so hit me up. Roll Tide.