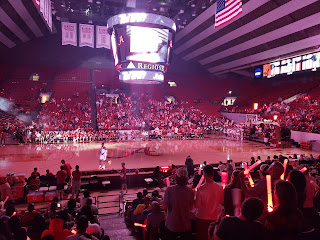 Last night Alabama Basketball hosted its annual "Tide Tip-off" event.  It seemed less marketed than in years past but featured a lot more actual basketball this year.  The last two years was mostly about dunk, shooting, and dancing contests, whereas this year the women's team opened with a 15 minute scrimmage followed by the men's team scrimmaging for two halves.  The white team started AJ, Petty, Herb, Alex Reese, and Dan Giddens with Javian Davis-Flemming coming off the bench.  The crimson team started Dazon, Riley, Tevin Mack, Galin Smith, and Donta Hall with Kira Lewis coming in off the bench.  The White team won 66-52 in front of about 3,500 in attendance.   Here are my takeaways, for what little they are worth:

- The women's  starting 5 can probably play with almost anybody in the country, but beyond the top 5 or 6, yikes.

-Depth should not be a problem for the men's team.  This is the best combination of size, depth, and experience that we've had in a long time.

-Kira Lewis is a bit under-sized, as one would expect for a 17 year old playing in the SEC.  He's also fearless.  He scored 17 points, mostly in the open court, and showed plenty of raw talent.  It's going to be fun to watch him get stronger and improve over the course of the season.

-Javian Davis Flemming has great size and will give us some muscle in the post.  He showed a few decent moves, and appears capable of setting a good screen without picking up a foul.

-Tevin Mack looks the part, and I think he can be as good as he wants to be.  He has a nice shot, and made a few jumpers, and also has good quickness and the ability to get to the rim.  His shot selection was poor at times, but he's probably going to have nights when he's hot and that won't matter.

-Alex Reese and Galin Smith both appeared to be in better physical condition than they were last year, and they should be a bit quicker and more effective.

-Herb Jones looked great on both ends of the floor.  He even ran the point some.  He can lock down 4 positions, and his offensive instincts appear to be improved.  He will be the best all-around player on the floor most nights. If his outside shot improves at all he could have a real chance at being a first round NBA draft pick.

-Petty handled the ball well and made some plays inside the arc.  He will still be the primary three point threat, but I think he's trying to get away from relying exclusively on the jump shot.

-Donta Hall showed off  his ridiculous leaping ability with a few monster dunks.

-Giddens seems more fluid and made some great plays around the basket on both ends of the floor.  We've seen flashes from him in the past, but if he's improved to be more consistent we will be difficult to handle in the post.

-I've been critical of AJ getting so much playing time in the past, but he could be a key part of this team at PG.  He's not going to fill up a stat sheet, but he brings great leadership to the position and the team seemed to have better chemistry with him running point.  He gets the guys in position to make plays.

-I'm not convinced Riley Norris is 100% healthy yet.  He air-balled a 3 and generally looked out-matched most of the night.

-Coach Johnson was mic'ed up, and mentioned that we would like to play fast and more in the middle of the floor.  He said last year we had a tendency to get too wide and bring the extra defender (in reference to the sideline) into play.  He explained a few plays and said we will look to get our bigs the ball at the elbow to open up the defense and with proper off-ball movement we should have some options.

-The team as a whole needs to do a better job of finishing.  Several times we made great moves to get a good look only to miss a layup.

-It was a little sloppy.  There were too many fouls, turnovers, and missed free throws, but that's to be expected for an early season scrimmage.

Overall, I was very pleased, keeping in mind the standard disclaimer that you can't really tell a whole lot by these types of scrimmages.  I plan to attend the Tide Pride BBQ practice next week and will report back.

It's great to be watching Alabama basketball again!