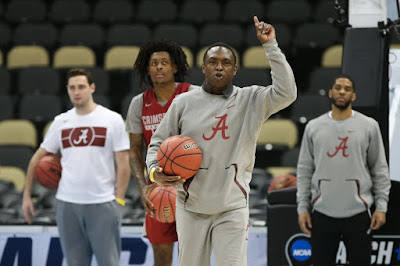 Wow. A game preview. That means we're preparing to watch an Alabama basketball game. That hasn't always been a pleasant experience over the years, but it's what college basketball diehards like me look forward to. Following what appears to have been a poor performance vs Jacksonville State in a scrimmage, I'm interested to see what the team looks like in this exhibition game. The game time is 7 P.M. CT. The game can be streamed via SEC Network+. Alabama enters the season unranked in the two major polls, and is currently ranked 51st in KenPom's preseason ratings.

My Two Cents: It's an exhibition game so you should expect the Alabama coaching staff to juggle player lineups and experiment on both ends of the court. You expect them to win of course, but it's not an indictment on the upcoming season if they lose. Auburn lost an exhibition game last season, and went on to win a share of the SEC title.

That said, I am hoping to see a better effort than what the box score from the scrimmage against Jax State suggested. For the Alabama program to take that next step the offense has to improve. In Avery's three seasons all of his teams have been top 50 rated defenses in terms of efficiency (per KenPom), but not one of his teams have been a top 100 offense in terms of efficiency. I'm a defense guy; it's my firm belief that a team can't be great unless they commit themselves on the defensive end. But you also have to be able to consistently put the ball in the basket if you want to be great. Alabama's poor shooting stats from the scrimmage vs Jax State (21-55, 3-18 from 3) don't exactly inspire confidence, but there's a long way to go this season and the potential is there for Alabama to take another step offensively.

Players to Watch: With Collin moving on, who steps into the lead guard position? Kira Lewis has a bright future, but at 17 years old he may need some time to adjust to the college game. Perhaps it's vets like Dazon Ingram or Avery Johnson, Jr.? Well, Dazon turned the ball over five times in the scrimmage against Jax State. For all of the things he does well on the basketball court, Dazon has always struggled with ball protection. If he can't take better care of the ball, Avery's going to have to turn to someone else to run the offense. Turnovers were a principal part of Alabama's offensive struggles a season ago; they simply have to improve in that area if they want to fulfill their potential this season.

For what it's worth: Kira played twenty minutes in the scrimmage on Saturday, which was more than Dazon (18) and AJ, Jr. (9). It's also worth noting that Herbert Jones is capable of running the offense if necessary. He did this at times last season, and I thought he did it well.

For Montevallo there are many new faces on the roster. The Falcons only return four players from last season, and none of those players were double figure scorers (though, in fairness, leading returning scorer Jeremiah Curtis did average just under double figures at 9.9 per game). With so many new guys on the roster, it's tough to know for sure who's going to emerge as the leaders for this team. Going off stats alone, I'll guess that newcomer D'Angelo Streeter could be a player to watch. His first two years of college basketball were spent at two different schools - Eastfield College (juco) and Angelo State (NCAA Division II). He redshirted at Angelo last season, but he averaged 19.3 points per game as a freshman at Eastfield, including one game in which he scored 56 points.

Prediction: Exhibition games are typically one-sided in favor of the Division I teams, but the results of the scrimmage vs Jax State does create some uncertainty as this team prepares for a new season. There are question marks at point guard, and the offensive stats in the scrimmage Saturday don't exactly leave one feeling confident. With that in mind, plus the unknown nature of this Montevallo team with all of the new players, as well as the uncertainty of how Avery chooses to approach this game from a roster standpoint, what we may see on Tuesday is a sloppy game that will feature a lot of different line-ups as both teams are trying to figure things out before the season gets underway.