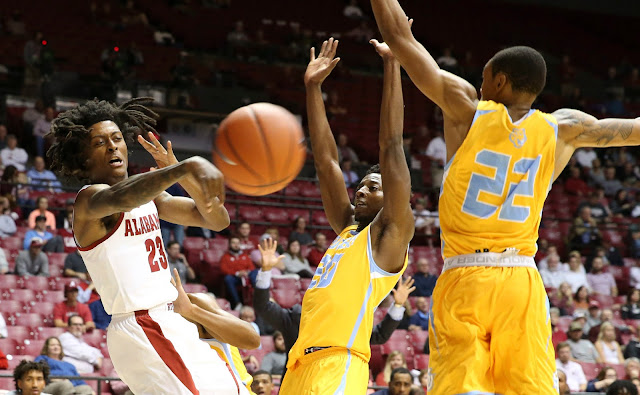 Following a sloppy but successful opening night, Alabama will look to improve as a team while also improving its record to 2-0. Next up is a home game with Appalachian State (KenPom Rank: 182) on Sunday. Game time is 6 P.M. CT. The game will be televised on the SEC Network. The Mountaineers are a member of the Sun Belt conference. They enter this game 1-0 after a 125-62 demolition of D2 school, Mars Hill.

Daniel Giddens returned to the lineup for the Southern game. Dazon Ingram missed the game with an ankle injury, but it doesn't appear to be serious so I expect he will play on Sunday. No word yet if freshman Javian Davis-Fleming will make his debut after missing the first two games with a minor knee injury. As most of you have heard by now, Riley is listed as "week-to-week" after undergoing a medical procedure to address a heart condition. According to Avery, Riley had the procedure because his heart was beating at an accelerated rate. Riley is expected to make a full recovery, but who knows if he plays another game in an Alabama jersey. Honestly, I wouldn't blame Riley if he doesn't play again. Heart conditions are a scary deal and he's got his whole life ahead of him.

My Two Cents: While a 20-point victory is always welcomed, I thought the opener was a mixed bag for Alabama from a performance standpoint. DJC went over some of the issues in his recap regarding the high number of turnovers, the officiating, etc. As always, if you haven't read DJC's recap, do that asap because he always does a great job of breaking down the game, the officiating, the crowd, etc.

In addition to those issues, it didn't feel like our guys always played hard in the game. There were stretches where I thought Southern was the more energetic team (Southern grabbing eleven offensive rebounds was disappointing to say the least), and if they had shot the ball better it's probably a much different feeling going into halftime. In the second half, Bama's defense was less than stellar in my opinion (Southern shot 43% in the second half, compared to just 32% in the first half). The high number of turnovers kept our guys from putting the game completely away until the last 5-10 minutes.

With the exception of the turnovers, our guys were solid on the offensive end (49.1% from the field, 37.5% from 3, had 17 assists), won the rebounding stat, and were never seriously challenged after a big first half run. Nevertheless, the sloppy level of play will be problematic if they don't clean it up because the schedule is only going to get tougher from here.

It's hard to know what to expect from Appalachian State based on their opener because of the opponent. The Mountaineers are expected to be an improved team after returning four of their top five scorers from last season. They are a veteran group with a good backcourt (more about them below) that are more than capable of winning this game if our guys decide to hand the ball over twenty or more times.

Players to Watch: It's only two games, but you have to be encouraged by John Petty so far. In the two games we've seen, John has hit 43% of his 3-point shots (7-16), and has just looked more comfortable on the floor in all phases. Again, it's only two games, but JP will be vital to Alabama's success rate this season so let's hope this positive start is just the beginning of a very productive sophomore season.

Ronshad Shabazz and Justin Forrest averaged a combined 32 ppg, 5.4 rpg, 5 apg, 2.4 spg last season. They didn't have outstanding shooting percentages, and they did average a combined 5.3 turnovers, but when you have the ball in your hands as much as those guys, and you shoot the volume of shots they're going to take, you have to take those stats with a grain of salt. Bottom line: these guys can play, and if they get comfortable on Sunday this game could get tight.

Prediction: I like the potential for this Alabama team, but I'm also concerned about the possibility of this team dropping a game or two unexpectedly early in the season as it's figuring things out. Appalachian State appears to be a team on paper that can present some challenges for our guys, but I'm going to trust that Alabama's experience, defense and home crowd will be the difference in this one.