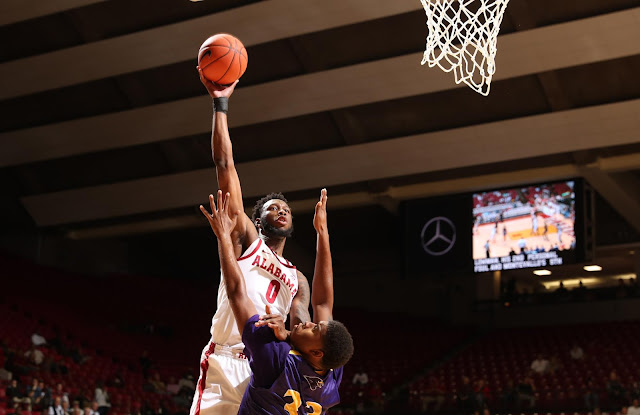 The season officially tips off when Avery Johnson's alma mater comes to town. Coach was a star player at Southern - his name is on the basketball court - so I'm sure he's looking forward to this game. Alabama looked good in their lone exhibition game, a win over Montevallo, despite four players (Riley Norris, Daniel Giddens, Javian Davis-Fleming and Diante Wood) sitting out. Diante is likely out for the season, but there is no word yet (at the time of writing this post) on the status of the other guys. My guess is that Riley will give it a go assuming he's over the illness that kept him out last week, while Daniel and Javian will sit out as they nurse leg injuries. Game time is 7 P.M. CT. The game will be streamed on SEC Network+.

My Two Cents: It's great to have college basketball back. The sport is going through some adversity in light of the FBI investigation and the corruption trials, but I'm guessing most sports fans won't be thinking about that when they settle in to watch the Champions Classic on Tuesday night. Obviously I'll catch up with those games after checking out Alabama. Hopefully our guys will have a good crowd on hand in Coleman for the opener.

Southern will have a new head coach this season. Sean Woods was previously the head coach at Mississippi Valley State and Morehead State. He was successful at MVSU, winning a SWAC title and making the NCAA Tournament. His tenure at Morehead was off to a good start before he resigned in the wake of troubling allegations that he assaulted players. This is a risky move for Southern in hiring Woods, but if he can keep his emotions in check he has shown the ability to win basketball games.

Southern was picked to finish 6th in the SWAC standings in the preseason poll. Their preseason ranking at KenPom is 342.

Players to Watch: He did it in a quiet manner, but Donta Hall was very good in the exhibition game. Donta finished with a stat line of 8 points, 11 rebounds, 5 blocks and 1 assist. Alabama's size was a significant factor vs Montevallo, and that will likely be the case in this game as well. Donta could be in line for another productive night.

Sidney Umude was selected preseason second team all-conference. Last season, he averaged 8.3 ppg and 4.6 rpg. He only played in 22 games because he had to wait until the end of fall semester to become eligible after transferring from Youngstown State.

Prediction: Alabama will have a clear talent advantage on the floor Tuesday night. As long as they don't play rock-bottom basketball their talent gap alone should result in a season-opening victory.