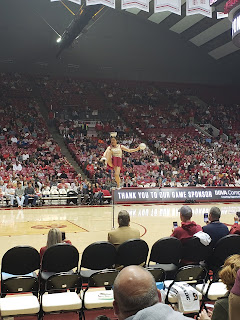 Alabama built a huge lead, blew it again, but made some big plays down the stretch to improve to 6-3 on the season with a hard fought win over Arizona.  This game showed why many of us still believe this team has the potential to be at least as good as last year's version, while also featuring some of the things that has frustrated us all in this early season.

Alabama played about as well as possible in the first 15 minutes of the game.  Donta got off to a slow start but kept his head in the game and really picked it up, dominating the boards.  Alex Reese was a key part in building the lead with his play on both ends.  He was arguably better in defending the post than Donta was, and he was scoring from inside and out.  T-Mack had one of his better games.  In general, we did a great job of getting in transition after securing defensive rebounds, and made 4 of 9 from 3 point range in the first half.

Unfortunately, once again we made some bone-headed substitutions late in the first half.  This business of playing Donta and Galin at the same time is about to drive me crazy.  At one point I even screamed at the coaching staff "This lineup doesn't work!  PLEASE put either Tevin or Alex in for Donta or Galin!"  CAJ and staff ignored me, other fans gave me dirty looks, and that lineup, which also featured AJ Jr, proceeded to allow the lead the dwindle to 9 going into halftime.  We also used the two big combination for a couple of minutes in the second half, and saw the remainder of our small lead disappear when Arizona went up for the first time.  I just can't understand why CAJ keeps putting them on the floor together when it hasn't worked all year.

To the team's credit, unlike in the Georgia State game, we responded when challenged.  We gave up too many easy baskets in the second half, but we played better defense after surrendering the lead, and got some key rebounds late in the game that allowed us to re-establish control of the game.  Arizona is a solid team, and you knew they would make a run.  I'm disappointed we let them come all the way back, but proud of how our guys responded.

Kira Lewis led the way with 20 points including a huge step back 3 with 13 seconds remaining to increase the lead to 5 points.  He really should have been in the game at the end of the first half with only one foul.  Alex had 15 and as I said above had a great all around game.  Tevin and Donta were also in double-figures with 12 and 13 each.  Donta had 9 rebounds and Alex had 8.  Galin also played well when he was allowed to play the 5 position and not sharing the court with Donta.  I really like Galin's game, he scored 8 points, and continues to work hard and give positive contributions off the bench.

JP continues to struggle with his shot, but unlike last year he's still helping us when on the court.  He played above average defense, had 6 good rebounds and 4 assists.  It's only a matter of time before the shots start falling.  Herbert is playing hard and still playing great defense, but he's a huge liability on offense right now.  He can't score from the field or the free throw line, and while he's always been somewhat limited offensively, it's never been this bad.  I think he may have a case of the "yips."  It could be that he's over-thinking it, as he knows that's the part of his game that needs to develop to play at the next level.    It got to the point where Arizona did not even bother to cover him beyond 5 feet from the basket, essentially giving them an extra roaming defender to double team at will.   I would not have had him in the game at the end, but he did get a huge rebound, and wisely passed the ball quickly before he could be fouled, and that led to Kira's dagger 3.  Dazon Ingram did not return after halftime due to back spasms.

Speaking of halftime, we were treated to Red Panda pictured above.  I love her.  I've probably seen her perform close to a dozen times and it never gets old.  She is arguably the greatest athlete of our generation.  I think we should offer her a scholarship and let her kick extra points during the upcoming football playoffs.  If she can kick bowls onto her forehead, surely she can accurately kick a football through the uprights.  I would bet she's a better free throw shooter than most of our team, too.

Considering it was a noon tip-off on a cold, rainy Sunday, I thought the crowd of around 7,000 was pretty solid.  The fans were positive and loud throughout, it was certainly the best home atmosphere we've had yet this year.  Arizona brought a couple hundred or so fans who were all in the upper rows of the coliseum.  They were loud enough that the "U OF A" chants could be heard on the floor during their run.

There was also a delay, with around 4 minutes remaining that seemed to kill some of our momentum due to a clock malfunction.  I understand yesterday the women's game was delayed because the roof was leaking.  We have such a lovely arena; I'm glad the renovations are in phase 2, clearly there is no need to be in any hurry.

Up next, we make the trip to north Alabama for the Magic City Classic next Tuesday where we will face the Liberty Flames in Huntsville.  Tip off is set for 7pm (or 30 minutes after the UAH game) from the Von Braun Center, and there is no TV as far as I know.  Liberty beat Georgia State by 20+ points and played both Georgetown and Vandy close, so we will likely need to play better in this game than we have in recent years to get out with a win.