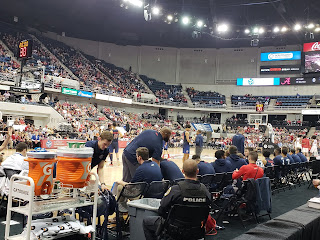 The Tide improved to 7-3 on the season with an 84-75 victory over the Liberty Flames in the third annual Rocket City Classic in Huntsville.  (Side note, can anybody explain to me why the Flames have an Eagle as their mascot and logo?)  This was one of the best game plans the coaching staff came up with all year.  We took advantage of our size and athleticism advantages by pushing the ball when possible and establishing the post by running the offense through Donta early in the game.

Donta responded with a career high 21 points, 4 blocks, and made 9 of 11 from the charity stripe.   Unfortunately Liberty was able to stay in the game throughout the first half by making nearly 50% of their 3s.  I didn't think our defense was terrible, they had a few wide open looks when they made our bigs chase them around the perimeter, but for the most part we contested them fairly well.  We had 8 turnovers in the first half and went to the locker room with only a one point lead.

JP set the tone in the second half with two early 3 point baskets to stretch the lead to 7.  Other than a stretch around the 13 minute mark when we had an odd ball lineup of Dazon, AJ, Riley, Alex, and Herb that allowed Liberty to cut the lead to 1, we maintained control of the game and had an 8-12 point lead throughout.  The Flames made just enough 3s, and took advantage of some poor help-side defense inside to prevent us from putting the game away.

Donta had a posterizing dunk over a Liberty defender in the second half.  Kira Lewis was instrumental in keeping the uptempo pace to Bama's liking in the second half while valuing the basketball.  We only had 3 turnovers in the second half, and Lewis ended up with 17 points in his return to North Alabama.  JP scored 16 points including 3 of 7 from three point range in front of his hometown crowd.  It was also good to see Herb start to come out of his slump.  While he uncharacteristically bit on a few fakes on the defensive end leaving open shooters in the first half, he managed to make 3 of 4 from the field and scored 8 points.  Riley played 15 minutes and had 4 rebounds but still generally looks over-matched.  With the exception of that stretch in the second half when Liberty cut the lead to one, I thought our substitution patterns were improved.  While 15 and 12 minutes for Riley and AJ respectively are too many in my opinion, at least we didn't see the Donta and Galin dual center combination in this game.

The crowd was a bit disappointing, I would estimate only about 5,000 of the 6,500 seats were used.  Our seats were on the front row, but at such an angle so when the players on Liberty's bench stood up, it blocked our view of the entire court, as you can see from the pic above.  So, I watched most of our offensive possessions in the second half on the video screens.  Jim Farmer, Bobby Lee Hurt, and other Huntsville basketball legends and corporate sponsors were honored throughout the game, and they all met with Knight Eady officials in our corner before being recognized on the court.  Coach Jack Doss was especially courteous in going out of his way to confirm that he wasn't blocking our view.  I wish they would add a screen that shows player points, fouls, etc.  I will give them credit for removing the ice that caused so many issues with the floor last year.

The atmosphere was generally dead and quiet most of the night.  I think the novelty of this event has worn off a bit, and it will not produce the packed crowds unless we're able to schedule a bigger name opponent, or at least a team with more regional interest.  I enjoy the games and setting there, but would like to see us rotate playing one neutral site game per year between there, Birmingham, and Mobile.  I suppose I could even stomach a once per decade or so trip to Montgomery thrown in there as well.

Up next, we return to campus for a matchup against the Penn State Nittany Lions Friday night.  Tip off is set for 8pm and it will be televised on the SEC Network.