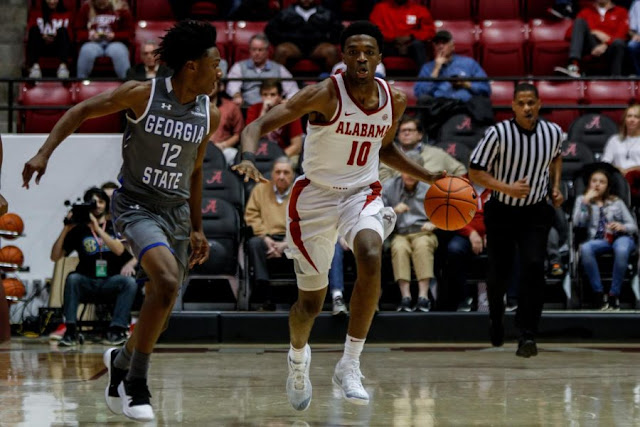 The Alabama men's basketball team will attempt to halt a two-game losing streak on Sunday when the Arizona Wildcats (KenPom: 49) come to Coleman. Arizona (7-2) is arguably a top ten program in the sport over the last thirty years so hosting them in Tuscaloosa is a big deal. The hope is that Coleman will be full and loud on Sunday afternoon to greet them. Game time is 12:00 P.M. The game will be televised on ESPN.

My Two Cents: Let's be honest a moment. Those of us who have been following the program over the years have seen our fair share of basketball losses. A team is going to lose games in college basketball, it happens. But there are some kinds of losses that are so deflating that it can make a fanbase, if only temporarily, question the direction of the program under the current leadership. This is typically a direct result of the frustration that arises from the extreme highs and lows that are witnessed in such games. When the game ends on a low note, it's common for people to let the emotion of the result overwhelm them to the point of cursing and pointing fingers and assuming the worst is yet to come.

Maybe the worst is yet to come, or perhaps we'll look back a month from now at the Georgia State game and think, "yep, that one hurt, but it wasn't the end of the world for this team in hindsight." I'm all in when it comes to my Alabama basketball fandom, for better or for worse. I will sunshine pump when things are going well, and I will gnash my teeth when things are going poorly. And in rare instances, I will keep a cool head and try to take a sensible look at the state of things. That's my objective as I write this preview, ice pack attached firmly to my head.

Alabama hasn't exactly put itself behind the eight ball in terms of its postseason resume, but the margin for error has become very thin. Frankly, one could argue that these next four non-conference games prior to the beginning of conference play are of the must-win variety. Alabama's two best wins so far are Ball State and Wichita State on a neutral court. Both of those are currently quad two wins. The remaining four opponents will likely not rate higher than quad two wins by season's end, but wins in all four would stabilize Alabama's resume for the moment, while also giving this team momentum heading into its first two conference games vs Kentucky and at LSU, which will both be major tests. The short version of all that: Alabama needs a win on Sunday.

Players to Watch: No specific player for Alabama, but the team as a whole. How do they react to what happened Tuesday? Do they rally around each other as a team, do they learn and grow from it, and does a leader(s) emerge for this team? You've got to have thick skin as a team and a coaching staff, and the hope here is that Alabama can concentrate on the good things they did in the first twenty minutes of the game on Tuesday and apply that to the game on Sunday. It's lost in the wake of the Georgia State comeback, but Alabama's change to a smaller lineup was the right move and resulted in a more dynamic offensive performance to start the game. If the team can clean up some issues on defense, they'll be fine.

College has been a journey for Arizona's Justin Coleman. Justin, from Birmingham, signed with Alabama during the Anthony Grant tenure, spending two years at Alabama before sitting out a year after transferring to Samford. He played a season there, but decided to spend his final season in Tucson. It's been a good move for him. Averaging 11.7 ppg, 3 apg and 1 spg, Justin has been a leader for this Arizona team, and has played a pivotal role in the Wildcats being somewhat of a surprise team up to this point in the season. No doubt he has had this game circled since the game was scheduled.

Prediction: Arizona has wins over a top 20 KenPom team (Iowa State) and a road win at a top 100 KenPom team (Uconn). Sean Miller has gotten the most out of this team up to this point. Of the two teams, Arizona is playing the better basketball entering this game. So that makes Arizona the easy pick, right? Not exactly. Say what you want to about Avery Johnson's time in Tuscaloosa, but there's no denying that Alabama has won some big games during his tenure. If you applied the quad wins/losses selection criteria, which wasn't in place at the time, to the 15-16 season, Avery's first in Tuscaloosa, there's a good possibility that Alabama may have squeaked into the NCAA Tournament. Year two was noticeably lacking quality wins, but last season's team made it into the field by virtue of the number of quad 1/2 wins that it picked up. The point being there have been some head-scratching losses during Avery's tenure, but also some big wins. Would anyone really be surprised on Sunday if this Alabama team followed up a head-scratching defeat with an eye-popping win?