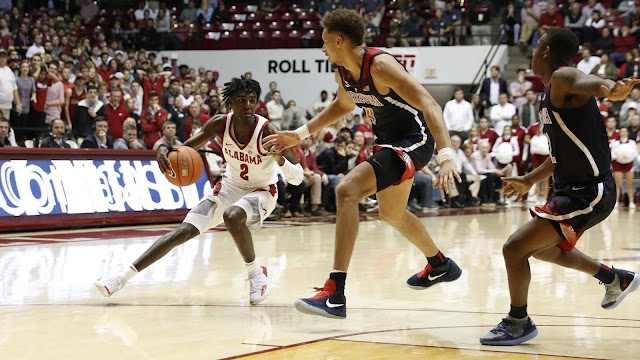 After a nine-day layoff for finals, the Alabama men's basketball team travels to Huntsville on Tuesday for the Rocket City Classic at the Von Braun Center. Alabama will face the Liberty Flames (KenPom: 88; Net Ranking: 36) from the Atlantic Sun Conference. The Flames enter the game with a 9-2 record, which is their best start since 1991. Game time is 7 P.M. CT. The official site does not list a TV option, but I checked the upcoming games on the ESPN app and this game is listed as an SEC Network+ game so for those of you unable to make the game in person you will be able to stream the game.

My Two Cents: Tell me if you've heard this before: Alabama is preparing to play a mid-major team expected to contend for its conference title. Liberty is in its first season as a member of the A-Sun, but the Flames are currently projected, along with Lipscomb, to win the league title. They also have a 26-point win over the same Georgia State team that upset Alabama and Georgia. KenPom only projects Alabama as a 3-point favorite in this game. So yeah, the same thing applies here as it did vs Northeastern, Murray State, Georgia State, etc.: If Alabama doesn't show up locked in and ready to play, Liberty is more than capable of beating them.

Liberty does quite a few things well based on the advanced stats at KenPom. They are currently rated in the top 100 in both offensive and defensive efficiency. The Flames play at a slow pace (ranked 309 at KenPom in adjusted tempo). What is frightening if you're an Alabama fan is that Liberty plays at a slow pace, but they're really efficient on offense. Their effective field goal percentage is a fantastic 57.4%, which ranks them in the top 10 at KenPom. By comparison, their opponents effective field goal percentage is 48.1% (the national average is 50.5%). Liberty also doesn't turn the ball over much; their turnover percentage is only 16.6% (the national average is 19.1%). They make their opponents defend for long stretches, protect the ball, and score efficiently. They make 39.2% of their 3-point shots and 56.3% of their 2-point shots, which rank them in the top 50 at KenPom in both categories. They also shoot the ball well from the free throw line, making 74.8% as a team.

Liberty's weaknesses, based on the advanced stats, are that they don't grab many offensive rebounds. They're only rebounding 25.3% of their missed shots, which currently ranks them 276 at KenPom. Alabama is only allowing their opponents to rebound 24.7% of their misses. However, this "weakness" for Liberty only comes into play if they're not making shots, and that hasn't been a problem for them much this season. Another weakness for  Liberty is they don't get to the free throw line often (currently ranked 339 at KenPom in free throw rate), but their opponents do. Getting to the free throw line has been a strength for Alabama this season; the problem has been they've been inconsistent once they get there.

It should be noted that in both of Liberty's losses this season (88-78 at Georgetown and 79-70 at Vanderbilt), the Flames shot a poor percentage from three (a combined 32%), and were significantly beaten at the free throw line (21 combined attempts vs 57 combined attempts for their opponent) and on the glass (an 83-55 discrepancy in the two games), which contributed greatly to Liberty falling short in those competitive games. If Alabama can force Liberty into similar struggles on Tuesday night, that appears to be the best path to victory. If Liberty is able to control the pace of the game, and their strength at protecting the basketball leads me to believe they can, and they're knocking down their shots at an efficient clip, it's going to put tremendous pressure on our guys to be more efficient on offense as well because there will be less possessions in the game. For an Alabama team that's been up and down shooting the ball as well as protecting it, that's not a comforting thought. The numbers suggest this is going to be a tough game on Tuesday night so prepare yourself.

Players to Watch: Expectations were high for Herb Jones entering his sophomore season. And while the season is still young, it's been an uneven season so far for Herb. His versatility continues to serve him well, allowing him the ability to help the team in many areas, particularly on defense where he remains one of the best players on the team at that end of the floor. It's the offensive side that's been a struggle. Herb's jump shot is still developing, his free throw mechanics need better work, he's not quite strong enough yet to finish consistently at the basket, and while he can handle the ball and run the offense when needed, he's also prone to turnovers (three or more turnovers in five of the nine games so far). He remains a work in progress, but if he can ever put it together the potential is there to be a great player. He appeared to be progressing in Charleston, but he hasn't played at an overall high level since that tournament. The hope is he's due for a breakout on Tuesday night.

What stands out when you look at this Liberty roster is that it's a balanced unit. The Flames don't have a deep bench, with eight guys getting the majority of the minutes. Four guys average double figures so no one guy stands out above the others from a stats standpoint. However, for the purposes of this part of the preview, I'll focus on Scottie James. James leads the team in scoring (12.7 ppg) and rebounds (9.0). At 6'7, James is the tallest player in Liberty's rotation (there is a 7'2 player on the roster, but he doesn't appear to play much). He's making 75% of his field goal attempts, 66.7% from 3, and 75% from the free throw line. Alabama will have a significant size advantage in this game, but a player like James could present matchup problems for Alabama's bigs. I'll be very interested to see how the coaching staff elects to match up against a player like James who can make an impact from any spot on the floor.

Prediction: Alabama hasn't been a poor defensive team this season, but I think it's safe to say that it's been the worst defensive team so far of Avery's tenure. In the last two seasons, Alabama has been a top 20 defense, but this team is currently ranked 64th at KenPom in defensive efficiency. They've been a little better on the offensive end, which has offset their defensive struggles to a point, but for them to improve means they have to fix the issues on defense. Yes, putting the ball in the basket is vital to winning basketball games, but the best teams are those that are balanced on both ends of the floor. Looking at Liberty's stats, I believe Alabama has to have one of their best defensive efforts of the season to win this game.

The Flames are your worst nightmare of a mid-major team looking to knock off a power team: they're well-coached, they're experienced, they play as a unit, they play at a slow tempo, and they are efficient in scoring and protecting the basketball. Honestly, they remind me a lot of Northeastern, and that team thoroughly dismantled Alabama in Charleston. The hope here is that this Alabama team, with a friendly Huntsville crowd behind them, can overcome what looks like on paper will be a very stern challenge on Tuesday night. As always, I remain optimistic. I'll predict Alabama to show up on the defensive end and pull away late from the free throw line.