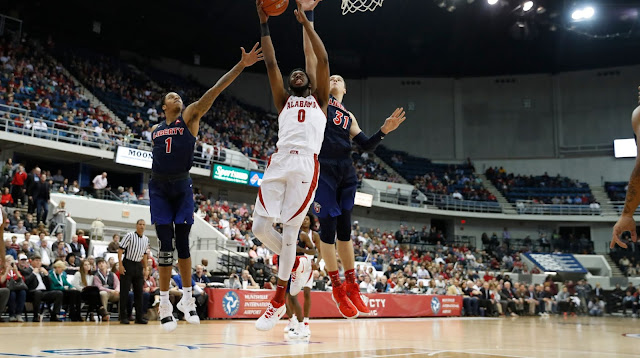 Following a short trip to Huntsville for the Rocket City Classic, Alabama will return to Coleman Coliseum on Friday night for its final game before Christmas. Awaiting them will be the Penn State Nittany Lions (KenPom: 42; NET: 68) from the Big Ten. Penn State enters this game 6-5 (0-2 in conference play). Game time is 8 P.M. CT. The SEC Network will handle the television duties. With a large portion of the students likely absent from this game due to break, I implore those of you in the area to get out to Coleman and support the team in this game.

My Two Cents: The first thing that stood out to me when I sat down to try and wrap my head around Penn State is that, despite a 6-5 record, the Nittany Lions are still a top 50 team at KenPom. Penn State has played a very difficult schedule. The Lions have a bad loss to Bradley on a neutral floor, but aside from that the other four losses were an overtime road game at DePaul (just outside KenPom's top 100 at 101), and three losses to teams in KenPom's top 26 (at Maryland, Indiana and a neutral floor loss to N.C. State). Mixed in with that is a home win over Virginia Tech, which is currently top 10 at KenPom. So yeah, Penn State is 6-5, which isn't great obviously, but their schedule and that big win over Virginia Tech suggest they're a much better team than their record would indicate.

The Nittany Lions have been an average team on offense so far this season (currently ranked 113 in offensive efficiency at KenPom), but they've been outstanding from a defensive efficiency standpoint (currently ranked 12th in the country by KenPom). They've been particularly good at forcing turnovers; their opponents turn it over 22.3% of the time (the national average is 19.2%). Alabama has struggled at times with ball security so that's a stat to monitor on Friday night.

Another stat to watch is rebounding. Both teams rank in the top 75 at KenPom in both offensive rebounding percentage, and defensively they both limit second chance opportunities for their opponents on the offensive glass. Alabama did not rebound the ball well against a smaller Liberty team on Tuesday. In fact, they were outrebounded by the Flames in that game. Second chance points could play a pivotal role in the outcome of the game on Friday so Alabama will have to be much better on the glass.

Both teams are below average free throw shooting teams, but Alabama does a much better job in getting to the free throw line. That certainly played a big role in the victory on Tuesday night. Despite the fact the team only made 64% of their attempts, they attempted 22 more free throws than Liberty. With Penn State so good on the defensive end, points may not come easily for Alabama so they need to take advantage at the line when they get there.

Players to Watch: Riley Norris played extended minutes for the first time since early last season. Riley was forced to shut it down last season after a hip injury. He made his return in the Georgia State game, but played limited minutes. While he had modest stats on Tuesday night, I thought he gave the team a lift on the defensive end in the second half. He had a classic type of Riley play at the halfway point of the second half when he forced a steal, and then went to the floor hard to not only gain possession of the ball but also called a timeout to save the possession for Alabama. I thought it was a big play that gave the team some energy in a close game, and Alabama was able to stretch its lead to double digits in the minutes after that play. For a team that's struggled somewhat on the defensive end, having a guy back that can come off the bench to defend and make hustle plays is most welcome.

Penn State's Lamar Stevens is arguably the best big man Alabama will have faced up to this point. You could also make an argument for UCF's Tacko Fall or Arizona's Chase Jeter, but I'll go with Stevens, averaging 19.7 ppg and 8.7 rpg. His scoring is more volume than efficiency (16.6 shot attempts per game; only making 43% of those attempts), and he really needs to stop taking 3-point shots (7-33/21.2%), but limiting him has to be at the top of the Alabama scouting report on defense. Rasir Bolton compliments Stevens play on the outside, averaging 14.8 ppg. Penn State is not a great shooting team, but it's not because of Bolton, who's making 42.6% of his 3-point attempts. If those two get going inside and out, Alabama's going to be in for a battle.

Also keep an eye out for Penn State freshman Myreon Jones. He's only averaging 12.6 minutes per game, but he's from Birmingham so I imagine he's excited for this game.

Prediction: This will be the best defensive team that our guys have played to this point. Honestly, you could make the argument (and Avery did in his Thursday press conference) that this is the best team that Alabama has played to this point. This Alabama team has been an above average offensive team so far this season, but the Nittany Lions are going to make them work for everything on Friday night. This Penn State team reminds me of the Alabama teams we saw under Anthony Grant: they play at a painfully slow tempo (currently ranked 244 in adjusted tempo at KenPom), are a mediocre shooting team, but are rarely out of the game because of how hard they play on the defensive end. If it's a close game in the 50s or 60s with two minutes left to play, Penn State will feel good about their chances to steal one on the road.

As I pointed out above, I do believe this Penn State team is better than their record suggests. However, aside from their strengths on defense, they don't do much else that stands out from a stats standpoint. With this game at home, if Alabama comes out and plays competent basketball on both ends for both halves (not a guarantee by any means based on the first ten games), I think they're simply the better team. Penn State's defense keeps them in it, but Alabama does just enough on offense to pull away late.