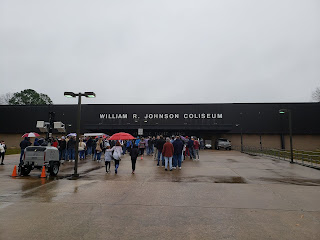 Yes, this place is every bit as depressing at it looks

Alabama closed out the pre-conference portion of the schedule with its first true road win of the season by beating the SFA Lumberjacks by 10 at "the sawmill" in Nacogdoches, TX.  We'll take a solid 9-3 record into SEC play.

The first 5 minutes or so of the game were extremely ugly.  We coughed up the basketball on every other possession between jacking up bricks, but somehow got to the first media timeout in a 2-2 tie.  I thought we were settling for too many 3 point shots, getting into a 3 point shooting contest on their home court seemed like a recipe for disaster.  We finally got Donta involved and they couldn't stop him down low, and that opened up the perimeter as Riley Norris started bombing 3s. 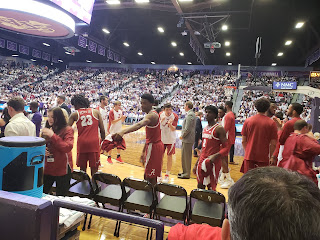 After the slow start the game generally had a nice flow as we built a 7 point lead going into the half.  We stretched the lead to 10-12 at several different points in the second half, but give some credit to the Lumberjacks for refusing to go away.  We couldn't deliver the knockout punch and they kept going on runs to cut the lead to a couple of possessions.

While I was annoyed at our inability to finish the game, I did like the way we responded each time they got within striking distance and the crowd got involved.  Coach Avery did a good job of using his timeouts to stop the momentum, and I thought Donta showed good leadership in the huddle, keeping everyone positive while being a calming influence. 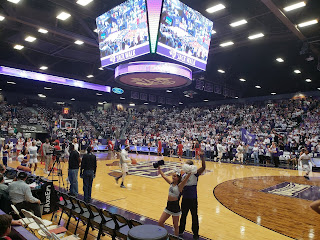 My only beef with Coach Johnson this game was leaving AJ in for too long, and going with a lineup of AJ, Dazon, Riley, JP, and Galin that allowed SFA to cut the lead to 4.  Kira and Donta came back into the game after a timeout and within 3 possessions our lead was back up to a comfortable 8 and the East Texas crowd was back in their seats.

Riley Norris was the MVP in my opinion.  He went 4 for 7 from three point range, and the last of those 3 pointers stretched a 2 point lead to 5 in the final minutes and silenced the crowd.  It was also the third shot of that possession, thanks in part to one of his offensive rebounds.  Riley's defense and 3-point shooting, along with our offensive rebounding down the stretch, were the keys to hanging on for the victory.

In addition to Riley's 14 points we had 3 others in double figures, Kira had a quiet 17 to go along with 8 assists, Donta had a double-double with 12 points and 14 rebounds, and T-Mack had a nice game with 12 points.  I really think Riley and Donta's experience and leadership were instrumental in keeping the team focused in a difficult environment.  Herb struggled most of the game, he shot an airball and uncharacteristically bought on some average side fakes defensively, but he did make some key free throws down the stretch.  We only made 14 of 20 from the line, but it was enough to hang on in the final minutes. 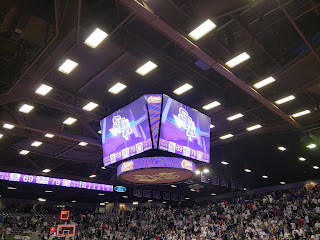 The gym was terrible.  I can think of at least three nicer high school arenas in the Birmingham area.  The scoreboard/video screen was nice and large, but it stuck out like a 75 inch QLED 4K TV in a single wide trailer.  It was dark, and you enter on the top row, the people at the top couldn't see all of the scoreboard due to the low ceiling.  They had 2 concession stands in the whole building, and the lines wrapped half-way around the court.  There were no separate stands selling only drinks, etc.  One of my seats didn't even exist, I had seats 7 and 8 in a row that the seats only went to 7.  I will be contacting their athletic department and seeking a refund for that ticket.

Nacogdoches is a quaint, small, very rural town.  If you like small, rural towns, you would probably enjoy a visit there, but personally I couldn't get back on the road fast enough.  It was a little over a 2 hour drive from Houston, which was absolutely miserable driving through all the small towns in the  rain.  All of that being said, the people there were mostly nice, and in fairness I was operating on about 2 hours sleep after an early flight from Miami where I  attended the football game the night before.  My flight arrived in HOU at 9:15 am, and since I had a ton of time to kill I decided to visit the space center before making the drive north.  I will post some pics below. 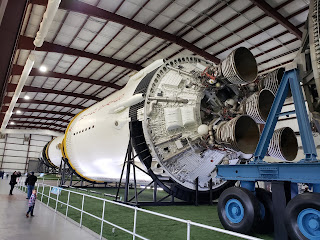 It ended up being close to a sell out with a large walk-up crowd.  I talked to a lot of people who weren't even huge SFA basketball fans but drove from hours away because it was such a big event for them.  They seem to be more of a football school as they were excited about the new coach who was announced at halftime.  He was complimentary of us for playing there, but said, "we're going to do so well that Nick Saban will bring his squad to Homer Bryce stadium in a few years."  Our players were coming back out to warm up by that point and even they were cracking up at that comment.

Their fans were enthusiastic and loud at times and it was a great atmosphere, even if they weren't the most knowledgeable.  There was one young recruit there for us, but I'm not sure who he was.  Kudos to the North Texas Alumni association for bringing about 30 fans over who were sitting across the aisle from me behind the Bama bench taking up a couple of rows.  There was probably close to 100 Tide fans there scattered throughout the 7,000 seat venue, which I thought was actually pretty good considering the ridiculously horrible location.  SFA did rip-off a couple of classless red-clad MLB teams that play in the NL Central with a timeout feature called "bandwagon cam," in which they focused on Bama fans in the stands and put captions such as "Has never been to Tuscaloosa," and "Doesn't know what Roll Tide means."   I get the Cardinals and Reds doing this to the Cubs, Chicago really DOES have bandwagon fans, and I know we do for football, but...I really don't think anybody is jumping on the bandwagon of our perennial mediocre basketball squad, much less going to bum-(insert word bobbyjack won't let me say here), Texas on a cold rainy day to watch them play against a forestry school. 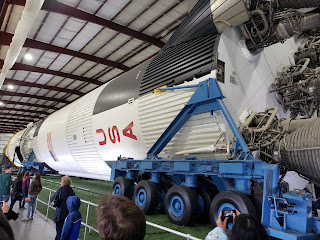 Personally, no offense to SFA, but I don't think we should agree to go to places like this.  In a sense they earned this game with their play over the last several years, but they don't appear to be as good this year and this probably will not end up being enough of a high quality road win to justify the expense and inconvenience, not to mention the perception of us agreeing to play somewhere like this.


Up next, we return home for the start of SEC play as Big Blue Nation will invade Tuscaloosa to watch the 13th ranked Kentucky Wildcats take on the Tide.  Tip-off is set for noon on ESPN, but unfortunately I will be on a flight to California for the football championship game at the time.  I booked this long before the basketball schedule was released, but I'm hoping I'll be able to catch most of it on the plane and perhaps one of my cohorts and will pick up my slack with a recap.