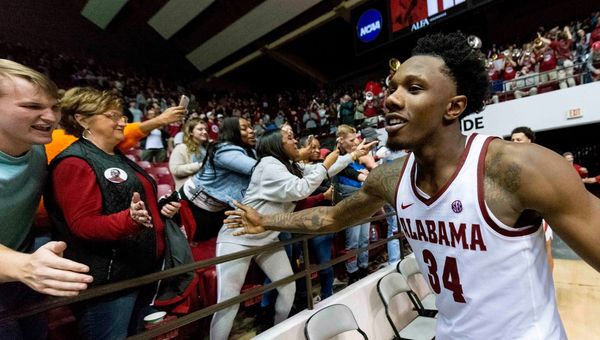 Good lord, that football game sucked, right? Fortunately, or unfortunately depending on your perspective, the Alabama basketball team is playing a game tonight when they head to Baton Rouge for a date with the LSU Tigers (KenPom: 42; NET: 26). This will be the conference opener for LSU; the Tigers enter this game with a 10-3 record. Game time is the always popular 8 P.M. CT. SEC Network will televise the game. I'm sure the LSU fans and students will not have anything to say about the football game.

My Two Cents: Alabama's win over Kentucky on Saturday was big for a number of reasons, but the biggest reason may be that it took some pressure off our guys coming into this game. Lose on Saturday and a possible 0-2 start in conference was staring them straight in the face. Now they're playing with house money on Tuesday night. This will be another quad one opportunity for Alabama.

On paper, LSU is one of the more intriguing teams in the league. Will Wade returned two impact players in Tremont Waters and Skylar Mays, and enrolled a top three recruiting class. They are a very young team, but very talented and capable of beating any team in the league on any given night. The Tigers are a borderline elite offensive team, currently ranked 29th in offensive efficiency at KenPom. As you would expect with a young team, the Tigers have been more hot and cold on the defensive end, currently ranked 84th in defensive efficiency.

The two areas to keep an eye on in this game will be turnovers and, once again, rebounding. Both LSU and Alabama turn the ball over at an above average (19.1%) clip (19.9% for LSU; 19.7 for Alabama). Unlike Alabama though, LSU is much better at forcing its opponents into turning the ball over (22.4%). Both teams thrive on getting out in transition for easy scoring opportunities. In a game that likely will be high tempo already, I think it's safe to say the team that protects the ball better, thus keeping the transition opportunities for the opponent to a minimum, will be the likely winner.

On the offensive end, LSU's path to victory will likely be inside the three point line. They are currently 9th in the country in 2-point %, making 58.2% of their 2-point shots. They have not been a good 3-point shooting team so far this season, only making 33.1% as a team (the national average is 34%). For Alabama, I think the path to victory will be having a repeat performance from Saturday on the 3-point line. Alabama made 10 3-pointers vs Kentucky, and they will likely need to hit a similar number on Tuesday night. Another strength for Alabama has been getting to the free throw line (17th in the nation in free throw rate) so they will need to force an inconsistent LSU team on defense to defend without fouling. And obviously, if Alabama can get to the line, they've got to generate easy points by knocking down their foul shots.

Players to Watch: Was Saturday a preview of things to come for Tevin Mack? After a bit of a slow start, Tevin has scored in double figues in five of the last six games. His offensive outburst in the first half Saturday played a big role in Alabama's eventual win. If he has a similar performance on Tuesday, Alabama will have a great shot at a sixth straight win.

LSU has a number of options to focus on, but I'm a fan of Tremont Waters game so I'll focus on him. Waters had a fabulous freshman year last season. I thought he was the second best freshman player in the league behind Collin. His numbers so far this season: 12.5 ppg, 5.5 apg, 3.2 spg (the third best pct in the country) and 2.5 rpg. If there's been an area of concern, it's his turnover numbers, which are a whopping 4.2 per game (by comparison, his turnovers per game last season was 2.9). Make no mistake though, he's the heart of this team. If Alabama is going to walk out of Baton Rouge with a win, they've got to contain Waters.

Prediction: Alabama is a perfect 3-0 in Baton Rouge during Avery's tenure, but this is the best LSU team they've played there. While LSU is talented, they have lacked cohesion at times when I've watched them, and they are prone to lulls on the defensive end. Alabama will enter this game on a high after a win over Kentucky that Avery didn't pretend was just another game; he made it very clear that their days of practice leading up to Kentucky were at a much higher level. Can they maintain that intensity, or do they regress a bit after such an emotional win on Saturday? This one is tough to predict. I'll go with the home team.