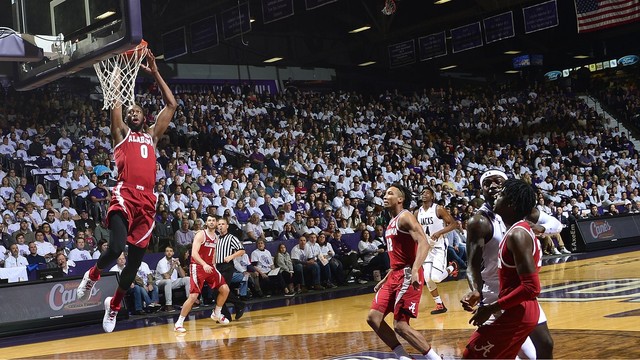 Happy New Year! I hope everyone has had a safe and peaceful holiday season. Alas, it is time to look ahead to a new calendar year with that mix of optimism and dread that have become old companions to the Alabama basketball fanbase. Conference play begins this Saturday in style when the 13th ranked Kentucky Wildcats (KenPom: 13; NET: 12) pay a visit to Coleman Coliseum. The Wildcats are 10-2. Game time is Noon. ESPN will televise the game.

My Two Cents: This is a huge opportunity for Alabama. Not only would a win mean a 1-0 start in conference play over a ranked team, but it will also provide an opportunity for a quad one win. Alabama is currently 1-1 in quad one games (at UCF, vs Liberty) because Liberty has been in and out of the NET top 50 (neutral site wins over a team ranked 1-50 in the NET count as quad one). That likely won't stick so Alabama needs to take advantage in games like this as they present themselves in conference play. Another reason this game is huge: three out of the next five games for Bama are on the road. Taking care of business at home gives them a little wriggle room in those road games.

Avery has no control over how the league schedules the games, but I'm guessing he's frustrated that this particular game is happening the Saturday before the Alabama football team plays in the national championship game and while the students are still on break. Between the fans traveling to California for the football game, and the lack of students on campus, the hope is that there will be enough Alabama fans in attendance to create a home court environment. For those of you that will be in Coleman on Saturday, get loud and stay loud. Top 2019 prospect Trendon Watford will be in Tuscaloosa this weekend for his official visit so show him some love.

Being a top 15 team, Kentucky doesn't have a lot of weaknesses. The Wildcats are a top 15 team in offensive efficiency and top 30 in defensive efficiency per KenPom. Where Kentucky has struggled is in ball protection (ranked 205 in turnover pct), and 3-point defense (opponents are making 38% from the line). Alabama has been an up-and-down team defensively, but they'll have to be much more aggressive in this one in an effort to turn the Cats over, thus limiting field goal attempts for this efficient Kentucky offense. Having a good day shooting the ball from three would also benefit Alabama. Kentucky's length and physicality around the basket is going to make scoring in the paint difficult, and rebounding even more difficult. Our guys have been a solid rebounding team, but Kentucky comes in with the better rebounding stats so you expect them to limit second chance opportunities. Frankly, Kentucky is better in most of the advanced stats so Alabama is going to have to play their best game in an effort to flip those stats to their advantage.

Players to Watch: In my opinion, this game will feature the two best freshmen in the league up to this point. Kira Lewis has been the MVP for this Alabama team through twelve games, and he might be looking forward to this game more than most this weekend. Kira took an unofficial visit to Lexington, and appeared, like most prospects, to have an interest in Kentucky. The Wildcats never offered him though. The hope is that Kira has the type of day on Saturday to make them regret that decision.

Kentucky's Keldon Johnson has been fun to watch this season. Not only is he skilled, but he plays with a high level of energy. Johnson is averaging 16.4 ppg (52.9% from the field, 43.2% from 3), 5.5 rpg and 1.5 apg. Kentucky as usual will have talent at every position so pick your poison, but Johnson has been a consistent presence each time I've watched Kentucky play so I think his performance on Saturday will be key. Also keep an eye on Ashton Hagans. Also a freshman, he's more of a role player for this team than a star like Johnson, but his play, particularly on the defensive end, has been key for the Wildcats in their two biggest wins of the season. He will likely be tasked with defending Kira for most of the game. If he's successful, Alabama's chances to finally get over the hump against Kentucky will be diminished.

Prediction: This Alabama team has made some strides through twelve games, but this will be the best team they've played by far. Kentucky's mojo is working after a slow start. They looked great in their previous two wins, a neutral site game vs North Carolina and at Louisville. It's not surprising that Kentucky is improving after a slow start, but I do wish they had put it off another couple of weeks. During Avery's tenure, Alabama is 0-7 vs Kentucky, and has lost those seven games by an average of 16.2 points. Alabama is a balanced team on the offensive end, and Avery's recruiting means he's going to have more talent and experience on the floor vs the Wildcats than in previous seasons. Unfortunately, Alabama is still a work in progress on the defensive end, and I think that's where this game could turn.