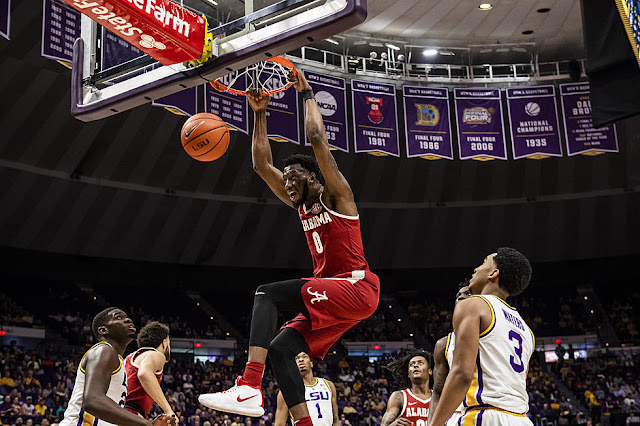 My Two Cents: Alabama did not play well enough over the course of forty minutes to escape Baton Rouge with a win, but I was encouraged by the team's effort to get back into the game after falling behind by as many as 19 points. LSU is a very talented team, and I suspect Alabama won't be the last team to struggle at the PMAC this season. That said, Alabama needs to bounce back at home this weekend. A&M is going through a rebuilding season, and if Alabama is going to put itself back into position to make the NCAA Tournament, these are the types of games they need to win.

The Aggies have been solid on defense. Their opponents do not have great shooting percentages on average (46.8 2Pt% and 32.2 3Pt%). Factoring in effective field goal percentage, which takes into account the value of made 3-point shots, A&M defensively holds opponents to a 47.5% (national average: 50.6%) effective field goal pct. The issues have been more on the offensive side of the ball where A&M struggles to protect the ball (245th in turnover pct), shoot the 3 (323rd in 3pt%), and their rate of free throws is just over the national average.

Players to Watch: In many ways, John Petty is an improved player from his freshman season. He's a better defender than he was last season, he's second on the team in rebounds, he's a more willing scorer inside the 3-point line, and he's a 50% shooter inside the 3-point line. On the flip side, he's second on the team in turnovers per game, and he's only making 32% of his 3-point shots. He has not had a bad season by any stretch, but I think it's fair to say that the team needs more from him if this season will ultimately be considered a success.

It's been an up and down season for TJ Starks in his sophomore year, but I think he's a star player when everything is clicking. And though he's struggled shooting the ball (38.3% FG; 26.4% 3pt), or turning it over (4.2 turnovers per game), he's still leading this team in scoring (14.5 ppg) and assists (3.8 apg). If A&M walks out of Coleman with a victory on Saturday afternoon, it's a safe bet Starks will have played a big role.

Prediction: It's been a competitive series between these two programs during Avery's tenure. Alabama holds a 3-2 advantage. The average margin of victory in the five games has been 5.8. Four of the five games have been decided by one possession. If that history is any indication, we could be in for another tight game on Saturday.

There are no easy wins in the conference, but A&M is currently projected to finish near or at the bottom of the league by KenPom. Home games against teams projected to finish in the bottom third of the standings are as close to must-wins as you can get in early January. Bama's toughest stretch of the season (at Missouri, at Tennessee, Ole Miss, at Baylor, Mississippi State and at Auburn) is on deck so they need to generate some positive momentum heading into that stretch.