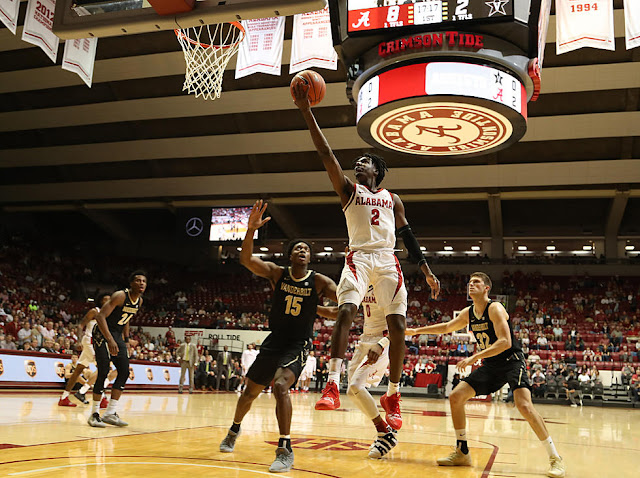 My Two Cents: The important thing is that Alabama won their home game vs Vanderbilt on Saturday. Unfortunately, some of the same issues in terms of protecting a lead came up again. Unlike other games where Alabama's energy wasn't quite right, the energy was there in this game so why the late run by Vanderbilt happened is hard to figure. As DJC pointed out in his recap, Avery only played eight guys so perhaps they wore down as a result of the heavier minutes? As DJC also pointed out, our guys took the air out of the ball much earlier than they should have. And give Vanderbilt credit, they've continued to compete despite a disappointing season. All of those factors could have played a part in Bama nearly surrendering a 20+ point lead in the second half.

However, the team has had trouble holding on to leads all season. It makes me question if Avery should take a long look at the strength and conditioning program. Lou DeNeen has become a popular figure with the students and fans, and the players seem to like him. I like Coach Lou. I liked him even more when he faced down Bruce Pearl after the two had a brief skirmish at the SEC Tournament last season. But when you consider that late-season and late-game collapses have been a frequent headache for this program, it's fair to wonder if changes shouldn't be implemented in the future. That doesn't mean sacking Coach Lou, but at least reviewing the program itself to determine if the players are being put in the best physical condition to compete throughout a long season.

South Carolina has been one of the weirdest stories in college basketball this season. The Gamecocks went a putrid 5-8 against their non-conference schedule. It was an admittedly tough schedule (Wofford, Virginia and Michigan are all top 30 KenPom teams), but Carolina didn't instill much confidence that they would be a factor in conference play. And now, on February 25th, the Gamecocks are 9-5 in conference play. If the league tournament started today, Carolina would receive the fourth and final bye. This sport is really stupid sometimes. As a result, the ranking systems such as KenPom and the NET probably don't have Carolina ranked accordingly because the numbers are so skewed between their non-conference and conference play.

In other years, even the Final Four season, you didn't think of Frank Martin's Gamecocks as high-tempo offensive teams. This South Carolina team is breaking the mold. In conference play, the Gamecocks are ranked 3rd in tempo, just behind Arkansas and LSU. They're the best 3-pt shooting team in the conference at 42.3%. Their effective field goal pct of 51.2% is ranked 5th in the conference. They're also ranked 5th in the league in offensive rebound pct. While the Gamecocks get to the free throw line often (ranked 4th in free throw rate), they are one of the worst shooting teams from the line with only a 64.3% success rate. They also struggle at times with turnovers. Their turnover pct is currently 20.4%, which is ranked 11th in the league.

The defensive end has been a mixed bag for Carolina this season. They don't do one thing exceptionally well. They're middle-of-the-pack within the league where it concerns opponent effective field goal pct (5th), 2-pt pct (6th), 3-pt pct (6th), block pct (5th) and steal pct (9th). They rank lower in categories such as opponent offensive rebound pct (13th) and free throw rate (10th). Their overall defensive efficiency rank within the conference is 10th. Certainly not a terrible defensive team, but if Alabama has a good offensive gameplan, they'll be able to score some points in this game.

Perhaps the key stat when I look at Carolina's conference-only advanced stats is their 2-pt offense. They are currently 14th in the league in 2-pt pct. This is really surprising to me when you consider that Carolina has big, physical guys like Chris Silva and Maik Kotsar typically staked out in the paint. Why is this stat so important? Well, when Alabama has struggled on defense, it's usually in the paint. Defending the dribble drive and rim protection have been practically non-existent when teams have gone on these crushing runs against Bama. The fact that Carolina hasn't been efficient in the 2-pt area of the floor (nationally, South Carolina is ranked 315th in 2-pt pct) could work to Alabama's advantage if the Gamecocks have a bad night shooting from 3.

Players to Watch: Guess where Tevin Mack is from. That's right, Columbia, South Carolina. I'd say it's a safe bet that Tevin will be up for this game with so many friends and family likely in attendance. If I'm Avery, I'm running offense through him early and hoping for a big night.

Chris Silva is not only Carolina's best player, but he's one of the best players in the league. He leads this team in scoring (14 ppg, 50.2 FG%, 76 FT%, 43.8 3-PT%), rebounding (7.2) and blocks (2.1). Unfortunately, foul trouble has plagued him for his entire career. This season is no different: he's averaging 5.65 fouls committed per 40 minutes. Alabama has to attack him early and make him defend without fouling.

But the key to South Carolina's turnaround in conference play has been the emergence of two freshmen, A.J. Lawson and Keyshawn Bryant. Lawson is tied with Silva for the team lead in scoring (14 ppg, 36.4 3-PT%) and leads the team in assists (2.9) and steals (1.2). Bryant is less developed than Lawson, but he's a fantastic athlete and a high-energy player for this team. Averaging 8.6 ppg, 3.6 rpg, Bryant is more of a role player now, but I could see him being an All-SEC player after another year or two playing for Martin. Because of his high motor and his ability to make plays on both ends with his athleticism, if Carolina goes on a game-clinching run, it's a safe bet Bryant will be involved.

Prediction: The Gamecocks are 6-1 in conference home games, with the only loss being Tennessee so they've been a difficult team to beat in Columbia. Avery's teams are 1-1 in trips to Columbia. You may remember the last trip to Columbia resulted in a 4-OT win for Alabama. This will be a tough test for our guys, but call me crazy, I think they have a chance to win this one. Consider that KenPom only projects Carolina to win by two points. He gives Alabama a 46% chance to win this game. With that in mind, is it so crazy to think Alabama can win? Depends on your perspective, I guess. I look at the raw data and I think Alabama matches up well on paper. Another person will look at the 6-8 record since the win vs Kentucky and think something else. I've had a decent record picking games this season (20-7) because I've tried to stick with logic instead of my heart. Logic tells me to go with the home team here, but I'll go out on a limb.