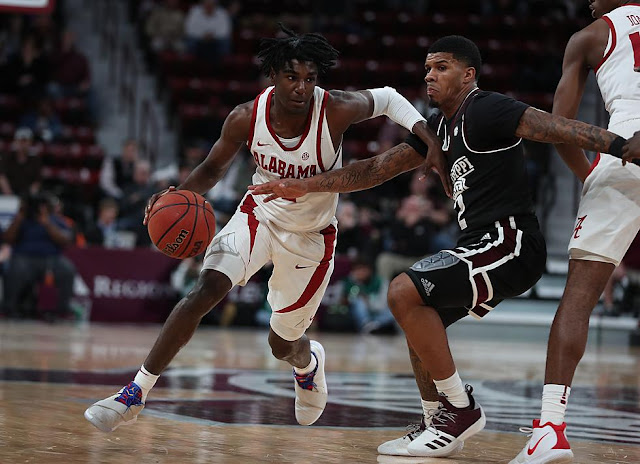 My Two Cents: It wasn't disappointing that Alabama lost in Starkville on Tuesday; it was  disappointing how Alabama lost on Tuesday. Frankly, the team didn't look prepared. They were sloppy with the ball, leading to 18 turnovers. Mississippi State crushed them on the glass again. State just looked tougher, faster, ready to play. And while our guys had enough mental toughness to keep themselves in the game for most of the evening, they lacked the mental toughness needed to protect the basketball and make the plays necessary to get over the hump (no pun intended) when they did reduce the deficit to 6-10 points. They simply never put much game pressure on a team desperate for a win. To State's credit, that was one of the better defensive efforts I've seen them put forth this season. They're talented at every position, and if they buy in on defense, the sky's the limit for that team. Alabama has shown a resiliency this season in bouncing back from poor performances. Let's hope that trend continues on Saturday.

Here's an interesting nugget to chew on: Alabama hasn't defeated a Gator team in Coleman Coliseum since 2006! For those of you playing at home, that was thirteen seasons ago. Mark Gottfried was the head coach. Billy Donovan was the Gator head coach. That Florida team would go on to win the first of two national titles. While Avery has led the program to back-to-back wins in Gainesville, his teams are 0-2 in Coleman vs Florida, losing both games by an average of 17 points. Doesn't that make you feel all warm and fuzzy looking ahead to Saturday?

Some may wonder why Florida still ranks so highly in systems such as KenPom and the NET despite the eleven losses. They're a top ten team from a defensive efficiency standpoint, which helps. And yet, I can't help but wonder myself when I look at their numbers on both sides of the court within league play. It certainly sheds some light on why they're 5-6 in league play. Consider this: in league games alone, while the Gators are ranked highly in defensive efficiency (4th), opponent turnover rate (1st), 3-pt pct (6th), block pct (7th) and steal rate (5th), they're ranked significantly lower in other defensive categories such as opponent effective field goal pct (9th), offensive rebound rate (12th), free throw rate (9th) and 2-pt pct (11th). It's a bit of a mixed bag, right? That said, I've watched several Florida games this season and they certainly pass my eye test on the defensive end.

The primary reason for Florida's struggles this season have been on offense. Nationally, they rank just 121st in offensive efficiency. Within the league, the Gators rank 8th or worse in several categories: offensive efficiency (10), effective field goal pct (13), turnover pct (8th), offensive rebound pct (10th), free throw rate (14th), 2-pt pct (14th) and 3-pt pct (9th). They also play at the slowest tempo in the league. One stat where they do shine on offense is at the free throw line where they are currently ranked 4th in the league in free throw pct. Add it all up on paper and Florida looks like what they are, a middle-of-the-pack team. Then again, so is Alabama.

The Gators defense will create some challenges for an Alabama offense that, while improved, doesn't have that one guy they can go to when they need a basket. If the Gators are able to limit their own turnovers and keep the game at their desired tempo, Alabama could find themselves in a similar situation as last season in Coleman when they scored a whopping 18 points in the first half en route to a 52-73 dismantling. Success in this game has to start on defense for Alabama. They need to turn the Gators over, get out and run, and force Florida into a tempo they're not comfortable with.

Players to Watch: Some people don't want to hear it, but I'll say it again for those in the back: John Petty is an improved player this season. His 3-pt shooting numbers are down from last season, but he's improved in every other major stat (scoring, rebounding, assists, etc.). That said, he's been quiet offensively the last three games, only averaging 5.3 pts per game. This would be a great time for him to get back on track in that department.

I believe the matchup between the freshmen point guards, Kira Lewis and Andrew Nembhard, will be key in this game. Nembhard is a talented 6'5, 191 lb guard who's leading the Gators in assists at 5.4 per game. While he isn't the scorer yet that Kira is, if he's able to control the tempo and protect the basketball on offense, while also doing his job on defense vs Kira, he could score less than 10 points in this game and still have a major impact.

The guy likely at the top of the scouting report for Bama on defense is KeVaughn Allen, the leader in scoring (12.5) and steals (1.5). But the scarier dude in that backcourt may be freshman Noah Locke. He's the one guy on this Florida team that has consistently been a 3-point threat, making 41.4% of his attempts this season.

Prediction: Can this Alabama team survive a rock fight? They may be forced to Saturday. Assuming Florida plays to their usual tempo, Alabama may be forced into more half-court situations than they prefer. In that scenario, can this Bama team generate enough offense and show up on the defensive end in a low-scoring, close game? I would rather not find out, but I do have concerns about how our guys will match up with a physical Florida team. Plus, there's that whole haven't beaten them in Coleman since 2006 thing. That said, our guys are a resilient group, and we've seen them bounce back from bad losses throughout this up and down season. This is probably going to be one of those games that's close and gut-wrenching throughout, but I believe our guys find a way to get it done on the home floor.