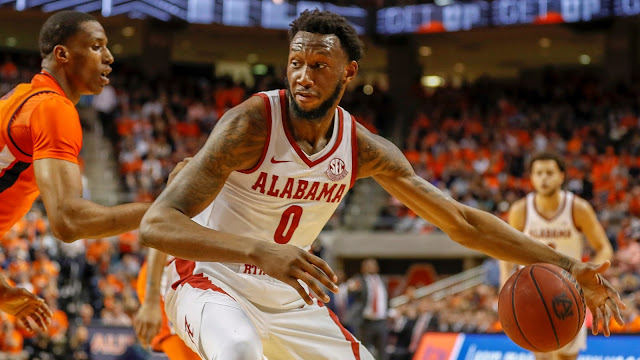 After another unpleasant trip to Auburn, the Alabama men's basketball team (13-8, 4-4) will return home briefly for a Wednesday night matchup with the Georgia Bulldogs (KenPom: 105; NET: 98). Georgia enters this game with a 10-11 (1-7) record. Game time is 8 P.M. CT. The game will be televised on the SEC Network.

My Two Cents: DJC perfectly captured most of my feelings concerning the Auburn game so I have nothing to add regarding that game. If you haven't read DJC's recap of the Auburn game yet, what is wrong with you, first of all. Secondly, please scroll down and read his thoughts on the game.

Alabama just completed a six-game stretch starting with the game at Missouri that I felt was the most important and toughest stretch of the season. It included games at Tennessee, Baylor and Auburn, plus home games vs Ole Miss (ranked at the time) and Mississippi State (still ranked). That Alabama finished 3-3 against that schedule, and had chances to steal road games at Tennessee and Baylor, was encouraging because it came on the heels of the home loss to Texas A&M, which was one of the most disappointing of the season. The team bounced back and competed, with the exception of the loss at Auburn, which helped the team finally crack the NCAA Tournament discussion. Fortunately, the schedule does lighten up a little over the next six games.

Those games include this game vs Georgia, at Vanderbilt, at Mississippi State, Florida, at Texas A&M and Vanderbilt. Those teams have a combined conference record of 10-30, and Mississippi State and Florida account for eight of those victories. Alabama has already proven this season that you can't take any game for granted, even if you have a double digit lead at halftime, but the next six games present this Alabama team with a great opportunity to string some wins together. The flip side of that coin is that it also presents Alabama with a chance to add more "bad losses" to their resume should they not play well.

Of the four teams currently occupying the league basement (Missouri, Georgia, Texas A&M and Vanderbilt), Georgia does seem like the best team. They have a head coach in Tom Crean with a Final Four and Big Ten titles on his resume, an experienced roster, and a handful of talented players that could elevate this team to the role of spoiler as the season progresses.

Let's start with what Georgia does well. If you guessed that they, like every other Bama opponent, is a good rebounding team, you are correct! The Bulldogs are ranked 24th in the country in offensive rebounding pct. They also get to the free throw line frequently; currently ranked 20th in the country in free throw rate. And not only do they get to the free throw line a bunch, they're also a good free throw shooting team, making 72.3% of their attempts. They also do a good job of limiting their opponents free throw rate, holding them to just a 27.7% rate. For context: the national average is 33.5%.

Overall though, this Georgia team has not consistently been a high caliber offense. It's on the defensive end where most of the strengths of this team lies. Opponents typically don't shoot high percentages against them. They're 41st in the country (47.3%) in opponent effective field goal pct. They hold opponents to 46.3% from 2 (37th in the country), and 32.7% from 3 (96th in the country). Their block percentage is also good, currently ranked 38th in the country at 12.8%. This isn't surprising given that the strength of their team revolves around a trio of big men ranging in height from 6'8 to 6'11. It leads me to believe that Alabama will have its work cut out in trying to create shot opportunities in the paint.

While those defensive numbers are strong, one area of concern for Georgia on that end is, like Alabama, they struggle to force turnovers. The Bulldogs are currently ranked 330th in defensive turnover pct with just a 15.4% rate. The national average is 18.9. It's different for the Bulldogs on offense, where they do struggle to protect the ball. They are currently ranked 331st in offensive turnover pct with a 22.9% rate. The fact that both teams struggle to force their opponents into turnovers leads me to believe this will be the most important stat of the game. Georgia also struggles to keep their opponents off the offensive glass, allowing an offensive rebound rate of 30.3%. Once again, it's all about turnovers and rebounds ladies and gents. The team that does the better job in those categories is your likely winner on Wednesday night.

Players to Watch: Donta Hall has been the most consistent player on this team, and yet he only had three field goal attempts vs Auburn on Saturday night. He made all three attempts by the way. I understand that game got funky, and Alabama was sped up by Auburn and was rarely in control, but Donta has to be more involved in the game plan. Facing a team with a trio of big men, Donta will also have his work cut out for him on the defensive end. If Georgia has some early success with their bigs, don't be surprised if Avery dusts off the "two bigs" lineup in an effort to match up. That means Galin Smith and perhaps Daniel Giddens will be counted on for increased minutes.

That trio of Georgia big men is Rayshaun Hammonds (6'8, 235 lbs), Nicolas Claxton (6'11, 220 lbs) and Derek Ogbeide (6'9, 250 lbs). While these three guys are going to do the brunt of their work in the paint, don't sleep on Hammonds and Claxton from the three-point line. Hammonds has shot 54 threes this season, making 37% of them; meanwhile, Claxton has shot 45 threes, making 28% of them. Neither is a lights out shooter, but both are capable.

Prediction: While the schedule does appear to lighten up a bit over this next stretch, I think it's important to remember that not much has come easy for this Bama team. In thirteen wins, only four of those games were decided by double digits. In conference games, our guys are averaging 74 pts per game, but are also allowing 73 pts per game. The Alabama offense has been efficient this season (ranked 47th), but the defense (ranked 72nd) has been so inconsistent it's been hard for our guys to build and hold substantial leads. At this point, it's fair to wonder if a higher ceiling exists for this team on defense. If there isn't one, expect more games of the nail-chewing variety going forward. That said, I do believe this team is a potential NCAA Tournament team. If there's truth in that belief, this is the type of game at home they need to win whether the final score is close or not.