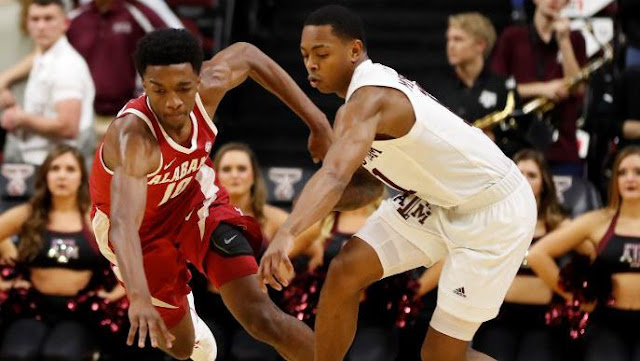 Well, that escalated quickly. Alabama (15-11, 6-7, KenPom: 60, NET: 52) was two games over .500 in league play just two weeks ago, and was in decent postseason shape. Since then, the team has lost three straight games and suddenly finds itself in a familiar position on the postseason bubble. The team will attempt to get back on the winning track against the last team they beat, the Vanderbilt Commodores (9-17, 0-13, KenPom: 125, NET: 131). Game time Saturday at Coleman Coliseum is 5 P.M. CT. The game will be televised on ESPNU. I hope the fans will turn out to support the team, but if reaction on social media is any indication, that's not likely to happen.

My Two Cents: When I wrote my preview for the A&M game, I truly believed that the team had a couple of bumps in the road against two good teams in Mississippi State and Florida, but would have a great chance to bounce back this week. For thirty minutes on Tuesday night, they didn't play a great game, but they were playing well enough to win. That the game turned the way that it did in the final twelve minutes was shocking to me. It's a good thing I'm not responsible for the recap because my brain has fogged out the last twelve minutes of that game and I couldn't tell you much of what happened other than the final score. A&M outscored Bama 33-12 in those final twelve minutes. It's difficult, as someone who does watch a lot of college basketball and has seen my share of meltdowns, to comprehend how you get run off the floor in a twelve minute span by a team that, no disrespect intended, is not that good. And that blowing double digit leads has been a trend for Alabama this season is incredibly troubling for those of us who care deeply for this program and the players that have chosen to represent it. Several people have asked me what I think is going to happen in the next five games, and all I can do is shrug. I have no idea. I will continue to hope for things to turn around, but I'd be lying if I told you I was confident in this team doing that in these final weeks of the season.

Vanderbilt has had a tough season, to put it lightly. And yet, credit must be given to that team and its coaches for continuing to compete. They went to Knoxville on Tuesday night and hung around in that game. They gave Auburn all they wanted the game before. 9-17 (0-13) is what it is, but of these two teams, Vandy is the team with the better effort over the last few games. Our guys better come ready to play or they're going to learn quickly that Tuesday night wasn't rock bottom. Vanderbilt is still playing to win games regardless of what their record is.

I'm not going to focus on stats in this preview. I'm still shook from the last three games, and I just don't know that stats are important right now. What's more important is the mental state of this Bama team. From my vantage point, this team seems to be feeling some pressure. I thought the team looked tight in the game on Tuesday night with the exception of the stretch in the second half where they built the twelve point lead. They looked pretty good during that stretch. They played with better effort to start the game, but looked tight, particularly on the offensive end where they have been an efficient team this season. And once they lost the lead, and A&M was knocking down some admittedly tough shots during that stretch, I knew it was over. And the team, again from my vantage point, seemed to know it was over too. If ever a team needed a quick start on Saturday, it's this Alabama team. The coaching staff has to settle down too. If they're not composed, the team won't be composed. Keep it loose.

Players to Watch: Riley Norris needs to be on the floor more down the stretch if Alabama's going to make the NCAA Tournament. He was the one guy on the floor for Alabama on Tuesday night that played with a sense of desperation. Why other upperclassmen on this team didn't have that same sense of urgency (ahem, Donta Hall) is hard to explain. Riley was hunting his shot, which is not something he normally does. He knocked down three three-pointers in the first half, and probably should have played more than the 23 minutes he did play. I can't remember because, like I said, my brain has fogged out the end of the game, but I'm pretty sure that Riley was not on the floor for the final five minutes of that game. Why? If you're having an issue with the effort level of your team, why would you not play the one guy on your team that routinely plays with a high level of effort? Avery is usually pretty good with sticking with the hot hands, be it a shooter or a guy defending well, but he didn't appear to stick with the one guy who was playing like the season was on the line on Tuesday night, and it may have been the biggest reason the game turned.

Aaron Nesmith is developing into a star for this Vanderbilt team. He didn't have his best game vs Tennessee on Tuesday night, but he did have two of his best games of the season previously vs Florida and Auburn, scoring a combined 50 points in those games. I wrote above that Alabama desperately needs to get off to a good start on Saturday. That includes not allowing Nesmith to get cooking early.

Prediction: As much as it pains me to write this, I don't trust this team right now. I don't know if something is going on internally, or if the team is simply not playing well, but there doesn't appear to be any floor leadership for this team, nor mental toughness. It's as if A&M flipped a switch on Tuesday night when they took a timeout down 12 and decided that, nope, Alabama is not going to win this game. And Alabama seemingly had no answers when they flipped that switch. In addition, the body language of our guys was poor throughout, I thought (again, with the exception of Riley). This is a team that seems to lack confidence. Without a leader on the floor to take the team by the collar and pull them over the line, they just don't seem to have the will to win that is necessary at this point in a season. With that in mind, I won't be shocked if the bad times continue based on what we've seen. But I can't pick our guys to lose at home to a 9-17 Vanderbilt team. That would just be giving up completely on this team.

I love this program, and I've got to believe that these guys are better than what we've seen the last three games. We've seen them be better this year! I've got to believe that they're going to find a way out of this poor stretch they're in and make a real effort at closing this out. I didn't have high expectations for this team in the preseason; I think I had them finishing 18-13, 19-12, something like that. I did expect them to compete though. The toughest thing for me as a fan to watch in these last three games (and other games this season) is the complete lack of fight and toughness when things aren't going smoothly. I don't know how these final five games and the conference tournament are going to pan out, but I hope that these guys rally around each other and play with a sense of purpose. That's all I ask.