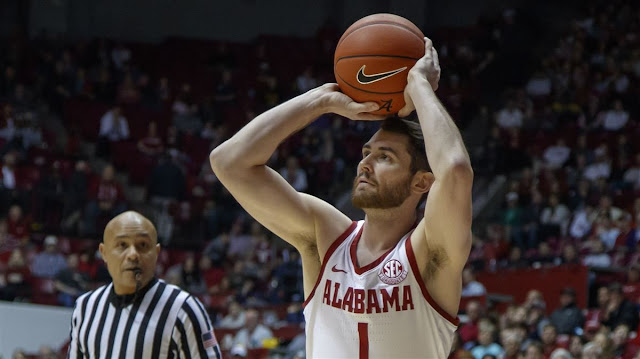 My Two Cents: Avery Johnson is feeling the heat from the fanbase. To be fair, the heat was already turned up, but a second sweep by Auburn in the last three seasons certainly didn't help matters. While the game results have been disappointing, if there is a silver lining, it's that effort hasn't been an issue for this team since the letdown at Texas A&M. They did play hard vs LSU and Auburn, but they didn't play well. Nevertheless, the team's effort suggests that the coaching staff and the players are still trying to turn this thing around. If the execution can match the effort on Saturday evening, the Alabama players and coaches will feel a little bit better as they prepare for Nashville.

It's strange to say this, being that this game will be played in one of the historically toughest road environments in the league, but it may be in Alabama's favor that this game is being played on the road. Whether it's the pressure of playing in front of a success-starved fan base, the difficulty of creating an energetic environment in the current configuration of Coleman Coliseum, or some other unknown reason, Alabama has really struggled at home during the oft-discussed late season swoons.

Consider this: In the last month, Alabama has dropped key home games to Florida, LSU and Auburn. All good teams, sure, but how do you not at least stumble into a 1-2 record in three home games? For the season, Alabama finished 5-4 at home in conference play. The same thing happened in year one (lost late season home games to Mississippi State and Arkansas), year two (the team finished 2-4 in its final six home games, including a first round loss to Richmond in the NIT), and year three (dropped their final two home games during that five-game losing streak to end the season). Now, maybe there's nothing psychological here; perhaps it's just further evidence of the inconsistency during the Avery Johnson era. I think it's somewhere in the middle. Maybe the best thing for this team is getting out of Coleman for at least the next two games. Maybe.

It's been a rebuilding year for Mike Anderson and the Razorbacks due in large part to the youth of this team. KenPom ranks Arkansas as the 13th youngest team in D1 basketball. It's not a team devoid of talent by any means, but the inexperience has haunted them in close games this season. Ten of their fourteen losses have been by single digits, and four of those were by one possession. Arkansas has also been vulnerable at home this season, currently with a 4-4 record in Bud Walton during conference play. Those four wins: Missouri, Georgia, Vanderbilt and, the best, Ole Miss.

As always, Mike Anderson's teams want to play fast. They're currently ranked 2nd in tempo in the league. That could play into Alabama's hands because the team does seem most comfortable when it can get out in transition and not have to think about it too much. Of course, it could also prove fatal if Arkansas is able to press Alabama for long stretches. When LSU and Auburn extended their pressure, those games started to turn. In many of Alabama's second half struggles this season, a common theme has been the opposing team putting pressure on the lack of good ball-handlers and forcing them into mistakes. If Arkansas is making buckets, they're going to do the same thing to Alabama. Our guys also have to remember to get back on defense because most teams talk about playing fast, but Mike Anderson's teams are committed to playing fast like few teams in the country. While Arkansas is willing to shoot threes, the bulk of their offense has come inside the 3-point line this season. 50% of their scoring has come from 2-pt range.

For the third straight game, Alabama will face a team whose defensive strengths are built around forcing turnovers. As we're all painfully aware, ball security has been an issue for Alabama this season. The lack of it played a big part in Alabama's previous two losses, and, honestly, it's been a consistent issue for the teams the last four seasons. Arkansas is tops in the league in forcing turnovers with a defensive turnover rate of 23.2%. They're 4th in the league in both block pct (12.8%) and steal pct (10.7%). It's a broken record at this point, but if Alabama is going to win this game they have to limit the turnovers, particularly the live-ball turnovers that lead to transition opportunities. Arkansas eviscerated Vandy in Nashville on Wednesday night thanks to a 34.3% Commodore turnover rate. Alabama had a turnover rate of 28.4% vs Auburn. It's not rocket science.

Arkansas has struggled on the defensive glass, allowing their opponents to grab 36.7% of their misses. That ranks 14th in the conference. Arkansas also frequently puts their opponents on the free throw line because of their frequent pressure. They also rank last in the league in that category. Alabama should have opportunities at the line, but it only matters if you make your attempts.

Players to Watch: They're not exactly the same type of teams, but one thing Auburn and Arkansas both like to do is speed up their opponents and take them out of a comfort zone. For Alabama against Auburn, that was taking Donta Hall completely out of the game. In both games vs Auburn Donta had a limited impact, at least on the offensive end. In both games, Donta only had six field goal attempts. Whatever happens moving forward, the gameplan has to involve Donta. If he's not getting the ball, run plays to get him the ball. If he's still not getting the ball, call a timeout and tell the guards to keep him involved.

Of course, Donta will have his hands full on both ends because he's likely going to be matched up with a projected lottery pick for most of the night. If Daniel Gafford isn't a lottery pick, he's likely going to be no worse than a mid-to-late first round pick, assuming he decides to enter the draft this season. He's been very good with averages of 16.6 pts, 8.5 rebs, 2.1 blks and 1.0 stls for the season.

While Arkansas is scoring 50% of their points inside the 2-point line, freshman Isaiah Joe obviously didn't get the memo. Joe has been scary good from three, making 43% of his attempts this season. On Wednesday in Nashville, Joe set a new single season record for threes made (103), surpassing Arkansas legend Scotty Thurman. It is imperative that Alabama knows where Joe is on the floor at all times.

Prediction: You may disagree, but I think this group of Bama players are good guys that want to win. They just haven't been able to put it together consistently. We can debate the reasons for that, which I won't go into here. This group of guys have bounced back each time despite the ups and downs of this season. Me, I quit several times during a game. These guys have continued to try and get better, and they should be commended for that. You may scoff, but what these guys go through in terms of athletics, training and school work is a major load, particularly for people so young. But the last two games felt like a breaking point. Here you are, hosting good teams, your season still in front of you, you play hard, but it still seems like you're fighting uphill, and at the end your opponent is celebrating on your home floor. When does it become too much, and are you able to muster up the level of mental toughness that you now need to go on the road and play a team that's going to try and pressure you for forty minutes? As much as I hate to say it, I just don't see it. Assuming Saturday night goes like I think it will, nothing short of a march through Nashville will result in the Alabama program returning to the NCAA Tournament this season.