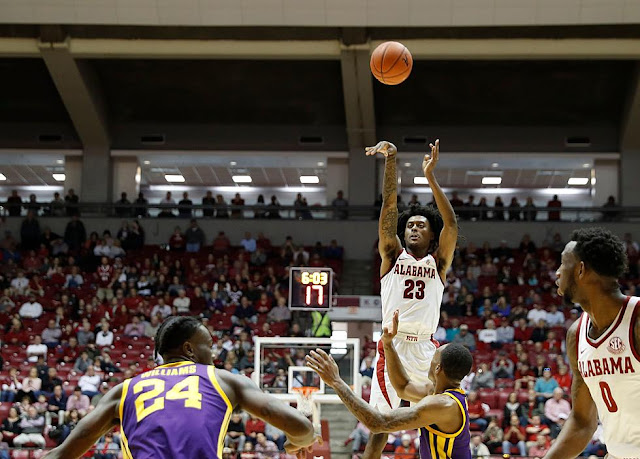 It's hard to believe that we are in the final week of the regular season for college basketball. There are a handful of mid-major leagues beginning tournament play this week. For Alabama (17-12, 8-8, KenPom: 57, NET: 53), you could argue that tournament play is already underway. At least, that should be their mindset. Alabama remains firmly on the bubble as they prepare to host the Auburn Tigers (20-9, 9-7, KenPom: 16, NET: 21) on Tuesday night. Game time is 8 P.M. CT. ESPNU is handling the television duties.

My Two Cents: Alabama played hard on Saturday vs LSU, but they didn't always play well. There was one stretch in particular late in the second half in which the shot selection was extremely poor that may have led to the disappointing result. But one should also give LSU credit. That's a good basketball team that is surprisingly clutch despite the number of young players on their roster. Of course, it's also a roster with multiple NBA prospects so it's also extremely talented. They made play after play under pressure down the stretch of that game. Sometimes, it's not about what your guys do, it's that the other team is good and wants to win also.

In addition to Alabama's bubble hopes and the rivalry aspect, both Bama and Auburn still have a shot at that fourth seed in the conference tournament, which raises the stakes even more for this game. The first game at Auburn was a one-sided affair in favor of the home team, but the Tigers have had their share of ups and downs as well this season, particularly on the road. The hope is that trend continues on Tuesday night.

One thing has remained constant for Bruce Pearl's program: the Tigers are one of the best offensive teams in the conference. They are top five in the league in offensive efficiency, and are currently tops in the league in 3-pt pct (40.1%). The Tigers really lean on the 3-pt shot as it accounts for 42.4% of their point distribution. To put it bluntly: if Auburn is knocking down their 3-pt shots at a high rate, they're a tough team to beat. They have had their struggles on offense in other areas, particularly within conference play. They're currently ranked 11th in offensive rebound pct, 10th in free throw rate, and 12th in 2-pt pct. That old saying about living by the three and dying by the three really applies to Auburn.

While the three is a big part of Auburn's attack, just as important as defending the three-point shot is protecting the basketball because Auburn loves to create transition opportunities off steals and blocked shots. The Tigers are currently ranked 3rd in both steal and block pct. This is what happened to Alabama in the first game. Alabama had 21 turnovers, which led to 30 Auburn points. Auburn had 13 steals and 3 blocks in that game. If Auburn is hot from three against a half-court defense, you just have to tip your hat. What you can't do is feed them live ball turnovers because they will absolutely eat you alive in an uptempo situation. Alabama actually ranks higher in the conference in tempo (Bama is 4th, Auburn is 6th), but I trust Auburn more in an uptempo game because they create more havoc on defense than Alabama does (our guys are currently ranked 12th in defensive turnover pct and 13th in steals pct).

While Auburn's defense can cause havoc for opposing offenses, they have struggled in other areas on the defensive end. They are 10th in the league in defensive rebounding pct, 12th in free throw rate, and average in 2 and 3-pt pct (ranked 9th and 8th respectively). As I mentioned in the LSU preview, if our guys are patient and protect the basketball, assuming shots are falling, which they didn't vs LSU, they can score on this Auburn defense. Keep an eye on Alabama's turnover pct. It was a whopping 30.4% in the first game. Anything above the national average of 18.7% and Auburn is likely going to sweep Alabama for the second time in three seasons.

Players to Watch: One could argue that it's been unfair how much pressure has been put on the shoulders of Kira Lewis. After all, he's only a freshman on a team with its fair share of upperclassmen. But that's the way the season has played out. Without Kira Lewis, this Alabama team would likely have a losing record. That's why his struggles in Saturday's game had a big impact on the outcome of the game, fair or not. What was most disappointing is that some fans, no doubt frustrated by the loss, thought it a good idea to take to Twitter and other social media networks to voice their displeasure with his play. This is ridiculous, of course, for the reasons I pointed out above. And yet, all that said, Kira will have to play at high level if Alabama is going to finish this season in the NCAA Tournament. In this game in particular, his ability to handle the Auburn pressure and protect the basketball, while running the offense efficiently, will be a crucial element in the game.

I can't believe we have to deal with Jared Harper (a junior) for another season (I assume). Harper may be diminutive, but he's one heck of a basketball player. He was a real problem in the first game, dropping 19 pts, 5 assts and 2 steals. Auburn has other dudes (Bryce Brown and Chuma Okeke, for starters) that can cause headaches, but I'll feel a lot better about Bama's chances on Tuesday night if Harper is not at his best.

Prediction: I don't think I'm overstating it when I say the pressure is on for Alabama in this game. Lose this one, and our guys are looking at having to win at Arkansas in the final game of the regular season just to keep themselves on the right side of the bubble heading into the conference tournament. This team showed some mental toughness in the home win over Vandy and the road win at South Carolina, but I believe Auburn is a much better team than those previous opponents. I sure hope I'm wrong, but I think the pressure may get the better of our guys at the most inopportune time.