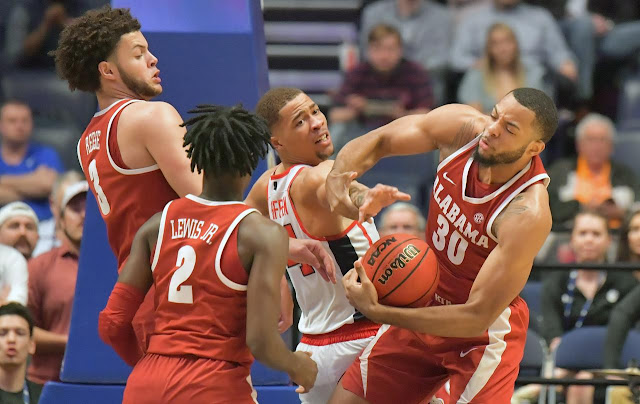 The dream is alive for the Alabama (18-14, KenPom: 60, NET: 59) men's basketball team following a, dare I say it, gutty comeback win vs Ole Miss on Thursday. The win, plus some other bubble teams losing on Thursday, put Alabama squarely back into the bracket discussion. A golden opportunity awaits in the form of the Kentucky Wildcats (26-5, AP: 4, KenPom: 8, NET: 5). Win this one and Alabama, despite the inconsistency of this season, will likely be in the NCAA field. Lose it and it'll be a nervous couple of days. Game time is 6:00 P.M. CT. The game will be televised on the SEC Network.

My Two Cents: I'm going to try and keep it short due to the quick turnaround. I'll be honest, I didn't have high expectations going into the game Thursday, and I even contemplated not watching. But it was an Alabama basketball game, and I couldn't help myself. And then the first half happened, and I quit on multiple occasions. Fortunately, the team hung in there, and while it wasn't a pristine second half of basketball, they competed in the second half and pulled through. In what felt like the first game in forever, Alabama dominated the glass, out-rebounding the Rebels by twenty. The final minutes were high drama similar to last season at this time, and just as satisfying when the clock hit 0:00. It doesn't erase the continued issues that the program has and must address on and off the floor, but I was happy for the players that they were able to gut one out after struggling with adversity for much of the season.

Players to Watch: Tevin Mack hasn't had the type of season I expected him to have, but he came up big vs Ole Miss. It was his scoring (along with Alabama's effort on the defensive end) that was crucial in Alabama erasing the halftime deficit. He had arguably his best game of the season in the first matchup with Kentucky. Can he have a repeat performance?

It looks like Reid Travis will return for the SEC Tournament after missing the last five games. Travis isn't Kentucky's best player, but I think he's the key player if this team is going to win a national title. His minutes will likely be limited, but he's a physical presence in the paint, and Alabama has struggled with those types of players this season.

After a slow start to the season, PJ Washington has become one of the best players in the country. Alabama is going to have a hard time matching up with him. He can play inside (54.9% from 2), outside (42.3% from 3), rebound (7.5 per game), and he's a good defender (1.1 blks, 0.8 stls). As always, Kentucky has talent all over the floor, but they need Washington at his best to be at their best. I don't think it's a coincidence that this team started to come into its own once Washington started playing better.

Prediction: Alabama players know they can beat Kentucky, they already did it once this season. But this Kentucky team, even with Reid Travis missing some games, is a much better team than the one Alabama saw in January. I was proud of this team for showing some fight in the second half vs Ole Miss, but this will be a different level altogether. Kentucky is once again a legitimate national title contender, have owned this tournament (more conference tournament titles than all other programs combined), and have knocked Alabama out of this tournament the last three years. Alabama will have to play their best game of the season in all phases to pull off the shocker. I'll predict they keep it close, but fall short. That means it'll be a nervous few days until Selection Sunday.