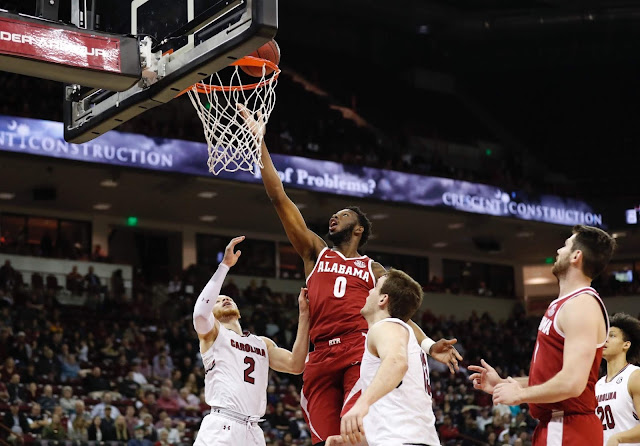 Happy March, everyone! I have a soft spot for Christmas as well as my birthday month, but, ya know, this is the best month of the year. It'll be even better if Alabama (17-11, 8-7, KenPom: 56, NET: 48) can make the NCAA Tournament for a second consecutive season. After a big road win at South Carolina, the team took another step towards that goal. Three difficult games remain, including a second date with LSU (23-5, 13-2, AP: 13, KenPom: 21, NET: 13) on Saturday. Game time is 11 A.M. CT. The game will be televised on ESPN.

My Two Cents: The win in Columbia on Tuesday night was arguably the most satisfying win of the season. Alabama has played and beaten better teams this season, but it was satisfying because of how our guys won the game. They haven't been the most mentally tough bunch when adversity has hit this season, but that narrative was not in play on Tuesday as they outscored Carolina 19-8 after the Gamecocks had erased a deficit and led by five points with eight minutes left in the game. Alabama showed poise on both ends of the floor, and played with an energy and attitude over the course of 40 minutes that has, frankly, been a rarity this season. It was very satisfying to watch.

Now comes back-to-back opportunities at home for Alabama to pad its resume with top 25 NET teams in the form of LSU and Auburn. As of now, both are Quad 1 opportunities. I know the fanbase has been down on the program at times this season, but the fans in the Tuscaloosa area really owe it to this team to show up and be loud on Saturday and Tuesday night. Even if you're not happy with Avery Johnson, at least turn up to cheer on the seniors (Donta Hall, Riley Norris and Avery Johnson, Jr.) one last time.

This is also a huge game for LSU as they seek an SEC title. They're tied with Tennessee and Kentucky atop the conference standings, and LSU actually owns the tiebreakers over both. The Vols and Wildcats play this weekend so LSU needs to win in Tuscaloosa on Saturday to keep pace with the winner of that game. After missing their star guard Tremont Waters for the last two games due to illness, it appears he will return for this game. It speaks to the depth of LSU that they could be without one of the top players in the league for two games and still go 2-0, with one of those wins coming against Tennessee.


The Tigers have many strengths, but it's the length of their frontline that has been a major part of their success this season. The Tigers are the top offensive rebounding team in the league, grabbing 38.1% of their misses. They're also tops in the league in free throw rate, and once they get to the line, they're 3rd in the league in free throw pct (78.4%). The Tigers also don't turn it over much, they're currently 2nd in the league in turnover pct (17.1%). And the Tigers prefer a fast tempo, currently 3rd in the league. Alabama is right behind them at 4th so we could see a fast-paced game on Saturday. LSU's biggest weakness on offense is 3-point shooting (30.8%, which is 13th in the league), but the Tigers made 10-15 3-point shots in the first meeting. Despite that number, I do believe that Alabama needs to force LSU into shooting a large number of threes because LSU has been very good shooting the ball inside the 2-point line (50.6%, which is 4th in the league).

On defense, LSU's biggest strength is forcing turnovers. Their defensive turnover pct is 20.5%, which is 5th in the league. They really excel at forcing steals, currently 2nd in the league with an 11.9% rate. Alabama has to protect the basketball because if LSU forces a high number of live-ball turnovers, there isn't going to be much for Alabama fans to cheer about on Saturday. Tiger opponents are also not shooting a high percentage from three (32.7%, which is 3rd in the league). Aside from those numbers, LSU's defense is average. If Alabama limits the turnovers, I think they can score on this team. LSU is 11th in defensive effective field goal pct, and 13th in defensive 2-pt pct. Their block pct is also rather low (10.6%, which is 9th in the league) for a team with their length and athleticism on the frontline. Again, if our guys are patient and protect the basketball, they can score efficiently against this LSU defense.

Players to Watch: Donta Hall had an impressive showing on Tuesday night against Chris Silva, one of the best big men in the league. Donta has had a tendency at times to shrink in the face of physical contact, but he went toe-to-toe with Silva and didn't flinch. He'll need a repeat performance because LSU has several big men that are going to want to set up camp in the paint and on the glass. If Alabama, led by Donta, can't hold its own in the rebounding department, I don't think they have a chance to win this game. Aside from that, Donta's college career is sadly nearing its end. He's made incredible strides from where he was as a freshman to now, and everything I've heard and read suggests he's a great guy as well. It's been very easy cheering for his success.

I also have to give Riley Freakin' Norris some more love. He's been great for this team this season, he was great again on Tuesday night, making big plays in that second half to help his team get the win. If Alabama is fortunate enough to punch their ticket to the big dance prior to the conference tournament in Nashville, both Donta and Riley will be key players. I don't know what the future holds for Riley as a basketball player beyond Alabama, but this has been a season to remember for him. As I mentioned in a comment to my last post, Riley deserves to end his career playing in the NCAA Tournament. I sure hope he gets there.

Prediction: I'm keeping my fingers crossed that a large crowd turns out for this game on Saturday and provides a true home environment that could swing this game. Our guys have shown some toughness in the last week since hitting rock bottom in the final twelve minutes in College Station so I think they're deserving of an energetic crowd. This will be a different level though. LSU's season up to this point has not been a fluke; they are a legitimate conference title contender and I'd list them as a dark horse Final Four team. Alabama is talented and deep, but I don't know that they can consistently match up with LSU at every spot on the floor. That means, all things equal, Alabama is going to be in for an uphill battle on Saturday, home crowd or not.