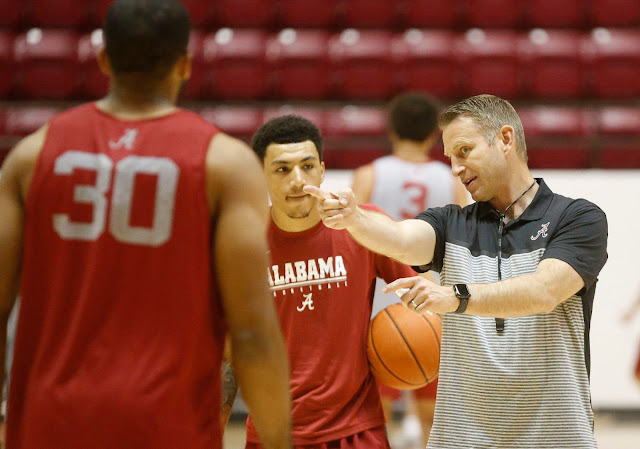 Well, here we are again; another college basketball season is looming. The university made a coaching change at the conclusion of last season, wrapping up Avery Johnson's tenure after four rather frustrating seasons. An efficient coaching search by AD Greg Byrne led to the hire of Nate Oats, formerly the head coach at Buffalo. Oats will be the third head coach hired by Alabama in the last ten years.

Nate Oats will be 45 years old when the season tips off. He began his coaching career in 1997 when he joined the staff at his alma mater, D-3 Maranatha Baptist in Wisconsin. In 2000 he joined the staff at D-3 Wisconsin-Whitewater. Following two seasons there, Oats landed his first head coaching gig at Romulus High School in Detroit. In eleven seasons he compiled an impressive 222-52 record, leading the team to the 2013 state championship. This success led to Bobby Hurley hiring him as an assistant at Buffalo. Following Hurley's decision to accept the Arizona State job two years later, Oats was promoted to head coach.

But we've seen this movie before, right? Not just at Alabama, but throughout college basketball. You know how it goes: mid-major coach excels, appears ready for the bright lights, only to fall short of expectations once he reaches the power leagues. With all due respect to the MAC, it's going to be a much higher level of competition that Nate Oats will encounter in the SEC, a league that boasts six coaches that have coached in a Final Four. My gut feeling is that Nate Oats isn't the usual mid-major coach that will hit a brick wall once he steps up in competition. But until he proves he can be a consistent winner in the SEC, the hype surrounding his arrival in Tuscaloosa is just hype.

Fortunately, the new coaching staff has inherited a mix of talent and experience for year one. This is not typically a luxury for incoming staffs. Say what you want about Avery Johnson's four seasons in Tuscaloosa, but the truth is he recruited well and left the program in much better shape than he found it. If Nate Oats is capable of doing the job, the roster is good enough to win immediately. Speaking of that roster, let's take a quick glance at the players. I'll start with the guards this week, and conclude with the forwards/centers next week. The height/weights listed are from the official site.

Herb Jones - 6'7 - 206 lbs - Junior: NBA scouts have been intrigued by Herb since he arrived on campus two years ago. Unfortunately, his development, particularly on the offensive end, has been a mixed bag. The lack of a confident jump shot, the strength necessary to finish in traffic, and intense struggles at the free throw line have all played a part in Herb's struggles on the offensive end. On the defensive end and in the open floor is where Herb has excelled so far. His versatility has also served him well; he can play up to four different spots on the floor, including the point. If he's able to develop more on the offensive end, not only will he become a great college player, but may find himself in an NBA uniform at some point. His 18-19 stats: 6.4 pts, 3.5 rebs, 2.0 asts, 0.9 stls

Kira Lewis Jr. - 6'3 - 167 lbs - Sophomore: Originally a part of the 2019 class, Kira reclassified to 2018 and immediately became one of the top players on the team last season. As a result, he was selected to the SEC All-Freshman team and the USA Basketball Under-19 team in the summer. He briefly entered the transfer portal after the season, but withdrew after meeting with the new staff. Kira is projected to be one of the top guards in the conference - perhaps the country - this season. And if Oats can successfully implement the system he ran at Buffalo, Kira should thrive. His 18-19 stats: 13.5 pts, 2.6 rebs, 2.9 asts, 35.8% from 3, 78.3% from the foul line.

Jaden Shackelford - 6'3 - 185 lbs - Freshman: One of three top 125 recruits joining the team this season, Jaden is from Hesperia, California. Rated a four-star coming out of high school, he averaged 34 pts, 11 rebs, 5.5 asts and 4 stls his senior season. Comments that Nate Oats has made about Jaden leads me to believe the freshman will be a rotation player this season.

James Bolden - 6'0 - 170 lbs - Senior: James is a graduate transfer that spent the previous three seasons at West Virginia. His 18-19 season was limited to 18 games due to injury, but he was having a good season (12.2 pts, 2.6 rebs, 2.5 asts, 1.1 stls, 34.9% from 3, 82% from the foul line) before that. Assuming he's healthy, he should be a crucial addition to the team. Not only does he bring experience and the type of skill set that should shine in Oats style of play, he also will give the team another ball-handler. This should help take some pressure off Kira. Both guys are comfortable playing off the ball so I expect we will see them together on the floor often.

Jaylen Forbes - 6'4 - 176 lbs - Freshman: The second of three top 125 recruits joining the team, Jaylen is from Florence, Mississippi. Rated a four-star coming out of high school, Jaylen was considered by many recruiting services to be the 2nd best player in the state. He averaged 23 pts, 9.1 rebs and 2.1 asts in his senior season. A two-time All-State honoree, Jaylen broke the scoring record at Florence High School as he led his team to the 2019 4A state championship game. Like Jaden, comments made by Nate Oats lead me to believe that Jaylen will also be a rotation player.

Jahvon Quinerly - 6'1 - 175 lbs - Sophomore: Jahvon joins the program after spending a year at Villanova. A former McDonald's All-American, Jahvon struggled to find a role at Villanova, averaging just 3.2 pts and nine minutes per game. The hope is that a change of scenery and a different coaching philosophy will be what he needs to reach his potential. The biggest question for Jahvon up to this point is will he receive a waiver from the NCAA to play immediately or will he have to sit out a year? With no clear understanding of the NCAA's waiver process, your guess is good as mine. Each season, roughly 50% of those players seeking a waiver receive one. It really is a coin flip.

Britton Johnson - 6'4 - 182 lbs - Sophomore: Britton is a walk-on guard from Mountain Brook. He played in five games as a freshman last season. He set the single-season 3-point record in his senior year of high school, and was a member of back-to-back state championship teams.

John Petty Jr. - 6'5 - 197 lbs - Junior: Like Kira, John's decision to withdraw from the transfer portal and return to Alabama was great news for the program and the incoming staff. I heard my share of Alabama fans last season grumbling about JP, but I thought he improved from his freshman season. His offensive game expanded; no more was he just a 3-point shooter. Suddenly, he was much more willing to find ways to score inside the perimeter, be it driving to the goal or using a size advantage against smaller players. I also thought his effort on the defensive end was much better, he was a more vocal player on the floor, and his rebound and assist totals were higher. The hope is that he can take another step forward in his development this season. He's an All-Conference talent if everything clicks for him. His 18-19 stats: 10.2 pts, 4.2 rebs, 1.9 asts.
Posted by MSmilie at 8:00 AM