The Alabama men's basketball team saw its first game action of the Nate Oats era on Sunday as it hosted Jacksonville State for a closed scrimmage. Alabama won the scrimmage by a final score of 90-81. Being a scrimmage, you take the stats with a grain of salt. Perhaps the most glaring stat to me was both teams combined for 79 combined free throw attempts. Good thing the scrimmage was closed because a game with that many free throw attempts is darn near unwatchable for me. Alabama forced 19 turnovers and limited Jacksonville State to 41.3% shooting (33.3% from 3). Unfortunately, Alabama's shooting numbers weren't great either: 39.2% (25% from 3). The difference in the final score was Alabama got to the free throw line more and made a few more, though neither team made free throws at a high rate (67.4% for Bama; 69.4% for Jax State). It's going to be a process, folks. 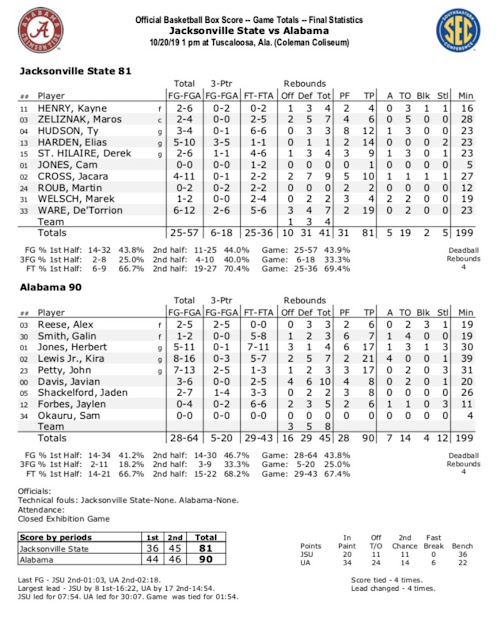