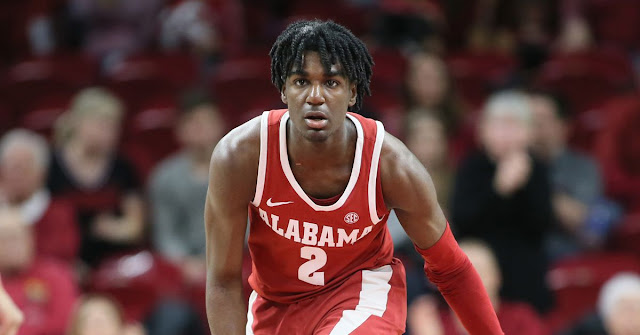 Here we go again, folks. Pack your hopes and dreams for another college basketball season. Alabama welcomes in a new coaching staff promising a more exciting, uptempo brand of basketball just like the other coaches before them. However, I think this staff really means it. Our first chance to see this team in action comes this Sunday at noon CT when the Georgia Tech Yellow Jackets visit Coleman for a charity exhibition game. No TV for this one according to the official site so if you want to see it you'll need to purchase a ticket. Neither team is ranked in the polls entering the season (although Alabama did receive two votes in the AP poll). Georgia Tech is ranked 66th in KenPom's preseason rankings, while Alabama checks in at 70th.

My Two Cents: Georgia Tech has a head start on this season. They took a trip to Spain in August, winning all four games. They also played an exhibition this past Sunday, beating Georgia College by a score of 98-76. I watched that game. For what it's worth, Tech played at a very quick tempo and shot the ball extremely well (52.2% from the field; 47.8% from 3). They also shared the ball, finishing with 21 assists. Assuming Tech is okay with playing that same tempo against an Alabama team that already wants to play fast, we could be in for a very uptempo, high-scoring game on Sunday.

Alabama won a closed scrimmage vs Jacksonville State this past Sunday, but their shooting percentages weren't great (43.8% from the field; 25% from 3). If Tech continues the hot shooting they displayed in their first exhibition game, Alabama will have to be much more efficient on offense to win this one. In fact, Alabama needs to be efficient on offense all season because this team may struggle to defend teams. While Bama is blessed with quickness on the perimeter, there isn't much length on this team, with very little size and no rim protectors on the frontline.

Players to Watch: After a strong freshman season, Kira Lewis is projected to be one of the best players in the conference, and maybe in the country. In the scrimmage vs Jax State, Kira led the team in points (21), assists (4) and was second in rebounds (7). Perhaps the most eye-catching stat is that, despite playing 39 minutes, Kira did not have a turnover. If he can consistently put up those kinds of numbers, the prospects for this team will rise significantly.

While Alabama lacks size, Tech does not. Their starting front line of Moses Wright (6'9), Khalid Moore (6'6) and James Banks (6'9) combined for 34 pts, 15 rebs and 6 assts in their exhibition game. In addition, their reserve big man Evan Cole (6'9) had 13 pts and 11 rebs in just 15 minutes of action. Also keep an eye on VMI transfer Bubba Parham; he's going to be an impact scorer for them off the bench. In their previous exhibition he had 15 pts, 2 asts and a steal in just 17 minutes of action. And starting point guard Jose Alvarado is the heartbeat and leading returning scorer for this team. Tech isn't projected very high in the ACC this season, but they've got some dudes.

Prediction: I believe Alabama is probably the more talented team, particularly if Beetle Bolden and Jahvon Quinerly play (JQ is still awaiting word on a waiver while Beetle is recovering from offseason surgery and has been limited in practice). They also have the luxury of playing at home in front of what I think will be a better-than-usual crowd for an exhibition due to the curiosity regarding the new staff and having an ACC opponent in town.

On the other hand, there is some justifiable uncertainty with an Alabama team learning a new system and transitioning to a new coaching staff. While I have faith in this team, I'm also prepared for the possibility of some growing pains along the way as the team figures things out. Georgia Tech has some advantages of its own with its frontcourt size that's capable of guarding away from the rim as well as its roster experience (nine juniors and seniors). I expect both teams to play fast resulting in a high-possession, competitive game (it being an exhibition, defense may be optional). Both teams are experienced, but in the end I'll go with the experienced team that has some games under its belt and a established system already in place.