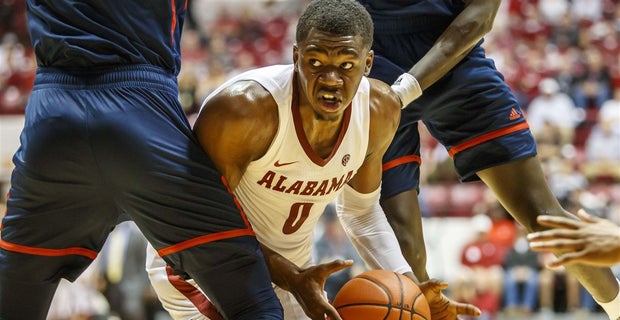 Alabama (KenPom: 69) will hit the road for the first time this season on Friday when they travel to Kingston, Rhode Island to play the University of Rhode Island (KenPom: 89) from the A-10. This is the back-end of a home-and-home series that began two seasons ago. Game time is 6:30 P.M.CT and will be televised on the NBC Sports Network. Both teams enter 1-1 on the season. Rhode Island is coming off an 18-point setback at Maryland. Jahvon Quinerly's appeal failed to sway the NCAA to grant him a waiver so he will sit out the remainder of the season and have three years of eligibility remaining next season. Herb Jones will once again be a game-time decision on Friday night. Galin, Alex and Beetle are nursing injuries, but are expected to play.

My Two Cents: Alabama is banged up and shorthanded, but their effort on Monday night, particularly on the defensive end, was great. FAU didn't play well, but I thought some of that was due to Alabama's defensive effort speeding them up and forcing them into quick shots. Coach Oats and his staff have injected some much-needed energy and toughness into these players, and they're going to need it because the schedule is not going to lighten up. On paper these teams look very similar; both teams are guard-heavy and lack size. Rhode Island only has two rotation players that reach 6'8, while Alabama only has three rotation players (Galin, Javian and Alex) that reach 6'9.

For Alabama, if they're going to steal one on the road Friday, they've got to take better care of the ball. Their turnover pct is currently 21.3%, which ranks them 226 at KenPom. And on defense, they've got to force more turnovers. So far this season, their opponents are only turning it over 16.3%, which ranks them 269. Alabama is currently playing at the seventh highest tempo in the country. Just imagine how fast they can go if they start creating more open-floor opportunities by forcing more turnovers.

Players to Watch: After not playing basketball for eighteen months and losing fifty pounds in the offseason, I'm guessing Javian Davis was ready for this season to start. He was an unknown coming into the season, but injuries and his effort in practice have put him in a position to play a larger role. After being a relative non-factor in the exhibition and the opener, Javian broke out with a 19 pt, 9 reb, 2 ast and 1 stl performance vs FAU. He was physical, active and gave Alabama a much-needed boost in the post. Javian isn't going to wow you with his athleticism, but he's got great hands, footwork, and face-up skills. He was particularly effective in the pick-and-roll. He's going to have his share of ups and downs as a redshirt freshman, but for the first time since he arrived on campus I feel confident in saying that Javian can play a role for this program.

While Rhode Island doesn't have a lot of size in the post, they do have an experienced, athletic player in 6'8 senior Cyril Langevine. Through two games, he's averaging 11 pts, 16 rebs, 1 blk and 1 ast. He's been an absolute monster on the offensive glass, grabbing an average of 8.5 so far. Despite their own lack of size, Alabama has held their own on the glass through two games; however, Langevine will be the most physical interior player they've seen so far. If he has another big night on the offensive glass, Alabama's chances of picking up an early road win are going to be slim.

Prediction: On paper at least, this looks like a favorable matchup for both teams. Rhode Island has the advantage of playing at home and facing a team that comes in banged up so they should be the favorite based on that alone. This is the type of game (a toss-up) that in years past I wouldn't have high expectations that Alabama could go on the road and steal one. As I wrote earlier in this review, Coach Oats and his staff have brought some much-needed toughness and energy to this program. It's too early to feel confident that it will sustain itself, but I am encouraged because the team seems to have brought in, are playing hard, and will hopefully continue to improve as the season rolls on. I'm not off to a great start picking games so far this season (1-2) so sticking with the safe pick would be the smart choice. But you know what, I'm going to go out on a limb here and pick Alabama to steal one on the road. Just a gut feeling.