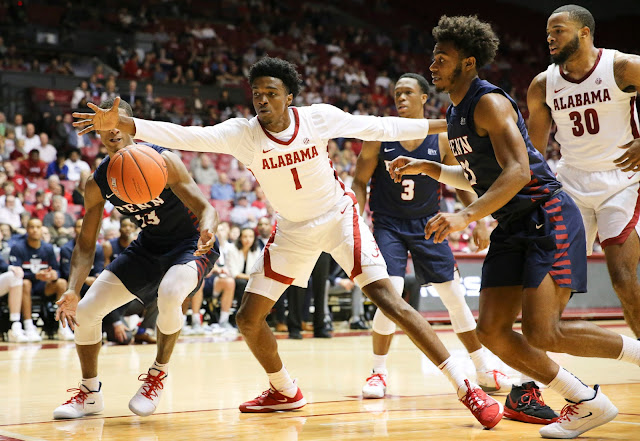 After a season-opening loss at home to Penn, Alabama  (KenPom: 73) will seek its first win of the season on Monday night when the Florida Atlantic Owls (KenPom: 179) from Conference USA come to town. Game time is 7:00 PM, and can be streamed via SEC Network+. The Owls enter this game with a record of 1-1.

Herb Jones left the Penn game with a hyperextended elbow. Nate Oats said that Herb will be a game-time decision for this game. I thought the trajectory of the Penn game changed when Herb exited so I really hope he's healthy and back in the lineup for this game. Jahvon Quinerly's appeal for a waiver is expected to have a ruling before the game tips on Monday. If cleared he likely plays in this game.

My Two Cents: It's always interesting to me as a basketball fan the difference between seeing a team play for the first time versus that team on paper. On paper: Alabama has talent, experience, some versatility and a coach with a system that worked wonders at his previous coaching stop. But watch that same team play an actual game, and all of a sudden the weaknesses become much more apparent.

Even with Donta Hall in the middle last season, Alabama struggled to defend teams in the paint. Donta Hall wrapped up his college career last season so, not surprisingly, the struggle to protect the rim continued in the opener. Penn scored 51% of their total points (42) in the paint. As we're all aware, Alabama doesn't have a lot of length around the basket, but the coaching staff has to figure out a way to gameplan around that weakness or the high hopes for this team are going to dissipate quickly. I know Coach Oats isn't big on playing zone, but he may want to consider it with this team.

FAU doesn't seem to have the skill in the post that Penn did, but they do have some size and athletes. In their previous game at Miami, they were +5 on the glass. If they could have forced more turnovers (only six), it would have been a closer game (Miami won 74-60) My guess is they're going to try and attack the paint early in this one. I'll be very interested to see what the defensive gameplan for Alabama is to start the game. Coming into this game, FAU is ranked 205 in adjusted tempo so, just like Tuesday, the speed of the game will go a long way in determining how this game unfolds for both teams.

Every game is big in college basketball. What a team does in November and December can determine where it finishes in March. With that in mind, Alabama needs to bounce back on Monday night. Penn is likely going to have a good season, maybe even win the Ivy League. That's a loss that may be much easier to stomach later this season. FAU's program is trending in the right direction, but this is probably a middle-of-the-pack team (at best) in CUSA. From a resume standpoint, losing this game would likely be a damaging loss that would stick. Furthermore, an 0-2 start would severely slow the momentum that Nate Oats and his staff brought to Tuscaloosa. People like us are going to stick it out with this team regardless, but the more casual fan may start to tune out. After the Penn game, I saw a lot of negative comments about the team. My guess is most of those fans aren't aware of how good Penn is, but it'll be harder to silence those folks if Alabama struggles to get back on track.

Players to Watch: With two guys out for the season (three if JQ's waiver appeal is denied), and others banged up (Beetle, Alex and Herb), this team needs more from John Petty. He didn't have a terrible game in the opener (9 pts, 7 rebs, 2 stls, 1 ast, 1 blk) but he did have four turnovers. And in the second half when Kira put the team on his back, it would have been nice to see JP step up in a complementary role. I remain convinced that John has an all-conference type of season within him, but he has to shake the aura of inconsistency that has surrounded him during his college career. There's no time like the present.

There's no AJ Brodeur in the middle for FAU, but as I mentioned this team does have some size. In 23 minutes vs Miami, sophomore Madiaw Niang (6'9, 210 lbs) was a presence on the floor for the Owls, finishing with 12 rebs, 7 pts, 3 blks and 1 stl. Though a bit raw, his length and athleticism could be an issue for our guys. Perhaps more of a threat to Alabama's dreams of a 1-1 record is Karlis Silins (6'11, 240 lbs). He only played 14 minutes at Miami due to foul trouble, but in those 14 minutes he finished with 12 pts, 5 rebs, and shot 50% (2-4) from three. If he stays out of foul trouble, it's probably a closer game at the end. Silins is a classic example of a pick-and-pop big guy, but his size advantage in the paint could prove to be the bigger concern. Alabama's undersized forwards will have to be more physical than they were in the opener.

Prediction: There is much to like about this Alabama roster, but the reality is the team is banged up right now and is going to have to weather some storms early as they try to get healthy. Fortunately, it doesn't appear that Herb's injury is serious. However, his wrist injury last season wasn't serious either, but the lingering effects of it hampered his development. The injuries to Beetle and Alex likely won't keep them off the floor, but it also won't allow them to play to their full potential. The hope is they can find a way to push through against the league's toughest non-conference schedule.

I watched FAU's game at Miami. The final score was not indicative of how competitive the Owls were. FAU played with confidence and it was only a late Miami run in the final eight minutes that allowed them to pull away. If Alabama struggles to shoot the ball again and their issues on defense persist, don't be shocked if they find themselves in another tight game in the second half. I have concerns coming out of the Penn game, but I also remain confident that the new coaching staff can figure things out. On the other hand, while I was writing this, I noticed that Rice, a team that lost its opener at Arkansas by 48 points, defeated Penn tonight by 19......... Your guess is as good as mine.