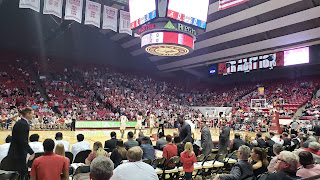 Note: This ended up being a lot longer than I originally anticipated.  I've included a "TLDR" version at the bottom for those of you who have better things to do than read my rambling musings.

The Nate Oats era officially got off to an inauspicious start with a one point loss to Penn at home.  Steve Donahue's Ivy League squad ruined the Alabama coach's debut.  If you feel like you've read that somewhere before, you are correct.  It was Steve Donahue's Cornell team that beat Alabama in Anthony Grant's debut back in  2009.   In case you're feeling masochistic, here is what we said about it at the time.   The team played hard and fast, but in the end could not overcome the injuries and a lack of interior defense.  There's a lot to unpack here, so let's get started:

As fans it's natural to compare a new coach's results to the recent past.  In a sense, there were some similarities:  poor shooting, missed free throws, and a disappointing November home loss in front of a decent crowd against a mid-major.  On the other hand, I felt that both Coach Grant and Johnson altered their systems somewhat to fit their players, and in the process the team either lost, or never developed, an identity.  As frustrating as the loss last night was, it was the fastest pace game we have played in over a decade.  We shot more than twice as many 3 point attempts as we have averaged per game over the last five years.  Come hell or high water this team is going to run and live or die by the 3.  Last night the shots weren't falling, so it was the latter.

Injuries are a part of the game and nobody will use that as an excuse, but this team has suffered an inordinate amount of injuries.  Hopefully this is just an anomaly and not a result of the intensity of the new pace and practice routine, but time will tell.  As you all know, Rojas and Gray are out for the year.  Meanwhile Alex and Beetle did not practice leading up to the game with hip and wrist injuries respectively.  The difference in the game was Herb going down with a wrist injury about halfway through the first half.  One has to think our best defender could have at least disrupted or prevented some of their dribble drives down the stretch.  It seemed the only way we could get a stop at times in the second half was when they would miss a layup.

We led by 6 with about 4 minutes remaining in the first half, but thanks to some turnovers Penn was able to claw back and tie the score at 35 going into the break.  We "only" had 15 turnovers on the night, and forced just as many, but they came at some bad times.  A lot of these seemed to be the result of trying to rush things to play at the pace the system requires.  Hopefully this will improve as the season progresses and guys get accustomed to Coach Oats' system.

Penn opened the second half on an 8-0 run and we simply could not stop them.  We stayed in a man to man defense that was a terrible matchup against their Princeton offense.  They executed screens and backdoor cuts leading to guys slashing open to the basket with help-side defense nowhere to be found.  We had no answer for Brodeur in the post, he finished with 19 points which opened things up for Jordan Dingle who ended up with 24.

As mentioned above, we had a short roster, and I know Coach Oats doesn't like to press for a number of reasons, but I wish we would have tried it at some point, if only for a few possessions to see if we could speed them up and get them out of their comfort zone.  Maybe a switch to the zone would have helped keep the ball away from Brodeur.  Our bigs simply don't have the lateral quickness to defend skilled post players, and if we insist on playing them straight up our only hope is going to be to create enough turnovers and exchange 2s for 3s.  As noted, the turnover battle was even and we shot only 29% from three point range.

Despite all of that, the team scrapped hard and manage to get back into the game.  At times last season an 8 or 9 point deficit felt insurmountable, but with this team's quickness and scoring ability, it never felt like we were in danger of being out of the game. We had plenty of chances in the final four minutes.  On one occasion we forced a turnover after cutting the lead to one, but JP promptly coughed it back up and Penn nailed a 3.  There were a couple of loose balls on rebounds that we couldn't secure.  Finally, Alex had a nice head fake and drove the lane for a dunk to tie the game with 2 minutes to go.  Penn made a couple of free throws, and we missed several open 3s on the next possession, but got a stop and Kira made a 3 to take a one point lead with 20 seconds remaining.  Penn answered with 7 seconds remaining, and Kira got to the free throw line with 2 seconds left but missed them both, and that was that.

Kira led all scorers with 30 points and also contributed 8 rebounds and 5 assists.  It was evident by his reaction he was devastated by the missed free throws at the end, but we aren't anywhere near being in position to win that game without his effort.  The fatigue from playing extra minutes due to the other injuries may have been a contributing factor.  Kira played 38 minutes including the entire second half.

Shackelford got the start and scored 16 points with 5 rebounds.  He was only 3 of 13 from three point range.  JP had a rough night with 9 points and 4 very badly timed turnovers, but he gave great effort and pulled down 7 rebounds.  Beetle scored 10 points in 26 minutes and had his wrist in a huge ice cast while on the bench, while Alex disrupted the passing lanes for four steals and 6 points in 17 minutes of playing through his hip injury.

I think it's noteworthy enough to mention that Nate Oats did not use a timeout until the final 1:30 of the game.  His offense is based largely on getting a shot up before the defense can get set, so he may feel like spending a timeout even after an opponent's made basket is wasting a possession, but I thought there were times it may have been wise to use a timeout to try to make some sort of defensive adjustment.

Let's talk about the officiating for a moment, and I'm going to warn you, this will probably not be popular.  I didn't think the officiating was terrible.  Yes, there were a couple of obvious blown calls each way, but that's going to happen in almost every game.  As many of you know I officiate high school basketball myself, and though I personally love calling games that play with this tempo, there is no denying it is more difficult to officiate and you are going to have more missed calls.  For one thing, it's harder to see a play as clearly when you are in a full sprint running up the court.  More importantly, it leads to the players being more spaced out, which also means the officials must take a wider stance and are often farther away from the play.

There was a controversial basket interference call that went against Petty, even after replay, in the final minutes of the game.  Coach Oats even criticized it in his post game news conference.  It has roundly been labeled as a "horrible" call.  Trigger warning: they probably got it right!  An offensive player may not touch the rim or the ball while it is in the cylinder.  The only exception to that is on a dunk, where the player brings the ball into the cylinder from outside.  On JP's put back, he initially touched the ball outside the cylinder, and that's what everyone is focusing on when criticizing this call.  However, based on the overhead replay (at least from my perspective looking at the video boards at Coleman, we really need to upgrade those but that's a post for another day), JP did not maintain control of the basketball, there was separation between his hand and the ball on his initial tap, THEN he touched the top of the ball again while it was in the cylinder.  It was likely going in anyway, but that doesn't matter under the rule.  If he either maintained contact with the ball from the initial tap, OR only tapped it that first time, the goal would have been good.  It was the second touch on the top of the ball that was the interference.

Officiating did not cost us this game.  Turnovers, poor shooting, and poor interior defense (they had 42 points in the paint to our 30) were the difference.  I expect those first two issues to improve over the season as the team adjusts to the new system.  Unfortunately, I don't think we have the horses to do much about the last one.

It was a great crowd, I would estimate 9,000 or so, and the fans were loud and encouraging throughout, even when trailing, and the players seemed to appreciate and feed off of the energy.  The student section was particularly impressive, as it was packed all the way up to the upper portals.  I hope the disappointing end does not dissuade folks from coming back.

TLDR: -New system is fast and perimeter oriented.  It will take some time to adjust, meanwhile we'll have to deal with some turnovers and off-nights shooting.  Interior defense is not good.  Effort was great, crowd was great, and this team should be fun and entertaining to watch even if the results may not always be what we are hoping for.  Injuries are killing us right now.  If Herb doesn't get hurt we likely win, and this is a much better team if we get him back, Beetle and Alex 100%, and JQ released from the NCAA

Up next,  the Florida Atlantic Owls come to Tuscaloosa for a 7pm tipoff next Monday night.  Plenty of time for our guys to get healed up and get the first win of many more to come.  Be there if you can.