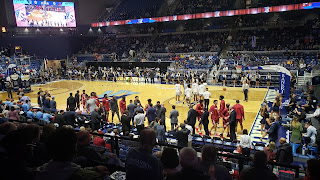 Alabama drops to 1-2 with a 93-79 loss to Rhode Island on the road.  The game started out well as the Tide jumped out to an early lead, but Rhode Island answered with a huge run over the next 7 minutes or so building a 20 point lead, and that was the difference in the game.  Twelve first half turnovers, and honestly it seemed like more than that, contributed to that big run.  This team is going to have to start valuing the basketball at some point or it’s going to be a long season.  It’s time to start Shack over JP in my opinion.  I officiated three middle school games Thursday night and I’m pretty sure those teams combined for less travelling violations than we had in the first half of this game.  Those unforced errors are the result of playing completely out of control.

In addition to routinely coughing the ball up, we didn’t make a single three point shot in the first half.  That’s a recipe for disaster.  The last 15 minutes or so of the first half may have been the worst I have ever seen from a college basketball team.  I thought we waited about 3 possessions too long to finally call a timeout.  I know Coach Oats is philosophically opposed to playing zone defense, and I generally agree with him, but we have one player who is above average defensively (Herb).  Our help-side defense is non-existent, and our other guards aren’t capable of consistently staying in front of their man.  We fall for every cross-over or ball fake.  At some point, we need to mix in some zone to keep teams from getting to the rim at will.  All of that said, Rhode Island settled for a lot of mid-range low percentage 2 point shots, but they seemingly made every one of them.  It was just that type of night.

To the team’s credit, they kept pounding the stone and made a run in the second half.  We only had 5 turnovers in the second half and finally started making a few 3s.  We cut the lead to 6 a couple of times and got some big stops but just couldn’t finish closing the gap.  I feel it was a classic case of using everything you have to get back into the game but not having enough in the tank to get over the hump.  A key possession that sticks out in my mind was when we were down 5 or 6 and got a stop, had great spacing leading to a wide open Beetle 3 from the corner, but he air-balled it short.  Beetle struggled in this one, which is disappointing as he’s a senior who has played in some big games on the road before.

On the positive side, Kira and Herb had outstanding games. Kira finished with 21 points and Herb had 17.  We out-rebounded them 40-31.  This team always plays hard, but not necessarily good.

The Ryan Center is a reasonably nice facility with the fans close to the court and good sight lines, but they could improve quite a few things.  The video/scoreboard is nice, but they had some connections issues and the stats did not update beyond about halfway through the first half.  The lighting is somewhat dark, and the LED ribbon board on the façade of the upper level drastically changes the color and lighting throughout the arena whenever the advertisements change.  The campus is in the middle of nowhere, I nearly hit two deer crossing the road less than a quarter of a mile from the arena.  It was dark, but from what little I saw their campus was unremarkable.  They have wifi in the arena, but it doesn’t work, and we were unable to get any data service.

The arena holds about 8,000 and it wasn’t a sellout, but there was probably 7,000 in attendance, including about 100 Alabama fans.  Their student section was packed and it was a good atmosphere, their fans were supportive of their team and loud, chanting “URI” nearly the whole game.  Their alumni were generally nice to us, but their students were classless, with multiple “F^&# You Bama” and “Bama sucks” chants.  I’m not offended by profanity, but at least try to be a little bit creative.  I met some  URI athletic staff members at a brewery after the game through some common friends I have that work in athletics at other colleges in the area, and they were extremely welcoming.  They bought us several rounds of drinks and were very complimentary of our team and our athletic department as a whole. 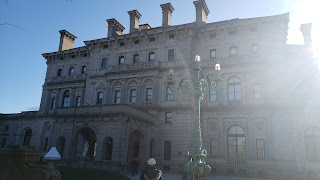 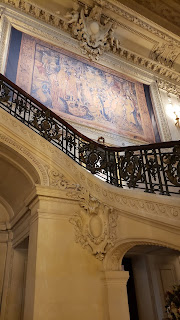 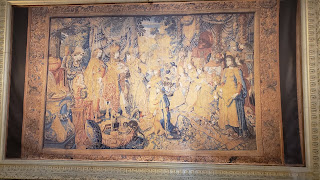 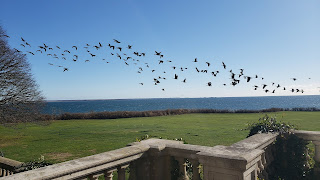 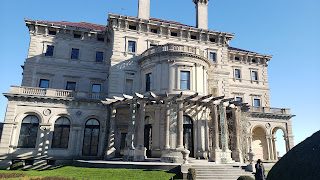 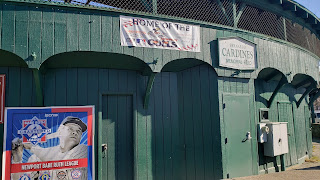 I toured the Breakers, Cornelius Vanderbilt’s  home in Newport Saturday morning, so I’m including a few pics from there.  As a Chicago Cubs fan, I'm a sucker for old ballparks so I had to stop at Cardines Field and take a few pics, but unfortunately I was not able to get inside.    Newport is a really cool town, and I also had a good time later in Providence watching the football game with some friends there.

Up next, we return to home to Tuscaloosa to take on the Paladins from Furman Tuesday night.  Tip off is set for 7pm.