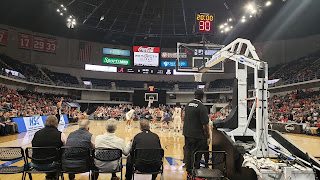 Alabama traveled to Huntsville and made 14 three pointers in a neutral site win over Belmont to improve to 5-4 on the season.

I thought this was the best team effort of the season to date for the players and coaching staff.  It was back and forth in the early going, and we were having some issues on the defensive end.   Muszynski was a matchup problem, we rotated Alex, JD, and Herb on him to varying degrees of success.  Belmont took a 6 point lead with about 5 minutes remaining in the first half, and Coach Oats called a timeout to make some adjustments.  We started double-teaming #33 when he got the ball in the low post and fronted him to prevent him from receiving passes.  It seemed to frustrate the Bruins, and we closed the half on a nice run to take a 46-38 lead into the locker room.

The hot shooting continued early in the second half, and Alabama quickly built a 20 point lead to put the game away.  Belmont made a couple of runs to cut it to 12, but the Tide always had an answer.  We only had 13 turnovers in this one, which was a big improvement.  I was shocked that Belmont did not attempt to press at any point.

It was a very balanced attack.  Making the early jump shots opened up the floor and provided everyone with plenty of scoring opportunities.  We had 6 guys in double-digits including all of the starters.  Davis gave us 12 off the bench.  Shack led the way with 16, Herb and Kira each had 15, and JP had 14 on 4 of 7 three point shooting in front of his home crowd.  Alex finished with 13.

When this team shoots over 40% from 3-point range and limits the turnovers to a reasonable amount, they will be difficult to beat.

I wrote last year after a lackluster performance against Liberty that the Rocket City Classic seemed to be getting a bit stale, but the organizers did a great job this year of bringing in a more intriguing matchup.  Unfortunately, with the game being on a weekend so close to the holidays and the weather outside being less than optimal, the crowd was a bit disappointing.  I would say only 4,500 of the 6,800 seats were occupied.  Our seats were directly the behind the basket, so between the goal support and the camera guys we couldn't see anything, but we were able to move down a few seats and get a better angle.  Belmont only brought a couple of hundred fans, so it definitely felt like a home game as the crowd was very supportive.  The Von Braun center is a little dated.  The 100 level is not well labeled or easily accessible, and there's very little statistical information available.  On the positive side, they have an excellent beer selection at reasonable prices.

Up next, the Richmond Spiders come to Tuscaloosa next Sunday night for a 5:30 pm tip-off on the SEC Network.  Richmond's only loss is to a top 25 team, so we will have our work cut out for us in the final game of the pre-conference schedule.  We are just one shot away from being on a five game winning streak right now, so hopefully the squad will be welcomed home with a big crowd and we can keep the momentum rolling.

Meanwhile, I wish you all a Merry Christmas and Happy Holidays!