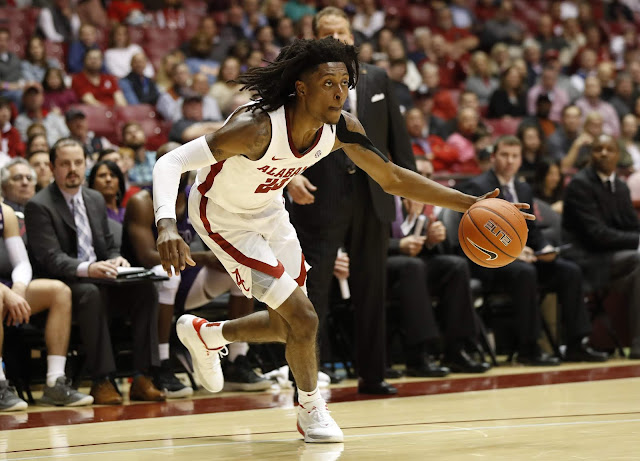 Alabama (4-4; KenPom: 82) will play its second true road game of the season when it travels to Big Ten country to play the Penn State Nittany Lions (7-2; KenPom: 23) on Saturday. Game time is 1:00 P.M. CT, and will be televised on the Big Ten Network.

My Two Cents: We talk a lot about Alabama's schedule, but Penn State scoffs in response and asks you to hold their beer. In ten games, the Nittany Lions have already played seven teams in the KenPom top 100 (four teams in the top 50). Barring a total collapse in conference play (the Big Ten has been the best conference in the country so that's not implausible), Penn State should be in the NCAA Tournament come March. On Saturday, the Nittany Lions are hoping to pad their resume with another win over a top 100 team, while Alabama desperately needs a quality non-conference win on the resume (their best win so far is over Furman, ranked 73 at KenPom).

Penn State has been very good from an advanced metrics standpoint. The Lions are top 50 in adjusted offensive and defensive efficiency, and are top 100 in the country on both ends of the court in effective field goal pct, turnover pct, and rebounding pct. Their 2-pt shooting pct on both ends is also top 50, and their defensive block and steal pct is ranked in the top 20. What you have is a very steady team on both ends of the floor vs an Alabama team that has been extremely inconsistent. In addition, this is arguably the best frontcourt Alabama has played so far (yes, including North Carolina), which doesn't bode well for a Bama team that has struggled to keep opposing teams off the offensive glass (currently ranked 237 in defensive rebound pct).

Players to Watch: John Petty seems like a different player so far this season. He's playing with more energy, toughness, and has been much more vocal on the floor, suggesting that he's trying to be more of a leader. In my opinion, he appears to be the player that has benefited the most from the new staff. There are other reasons for his maturation, such as the fact that he recently became a father, which I encourage you to read about in a story published in the Montgomery Advertiser that I have linked.

His stats have also been good: second on the team in scoring (15.0), first in rebounds (6.9), second in assists (2.1) and second in steals (1.5). And his effort on the defensive end has been fantastic. For example, in the SFA game, there was a moment that John began to cramp, but he tried to make a play on the ball anyway. If he and Kira become a consistently effective duo on both ends, this team can turn things around sooner rather than later.

Penn State's frontcourt duo of Lamar Stevens (6'8, 225 lbs) and Mike Watkins (6'9, 257 lbs) is going to be a nightmare matchup for our guys on Saturday. Stevens is considered one of the best college basketball players in the country. A likely all-conference player as well as a potential all-american, Stevens can play inside/out and guard multiple spots on the floor. He's averaging 16.6 pts, 7.6 rebs, 2.1 asts, and 1.5 stls. And unlike last season, Penn State is not a one-man show anymore so there's less pressure on Stevens to have to shoulder the full load.

A big reason for that is Watkins, after battling injuries the past two seasons, is healthy and having a strong senior season. He's averaging 11.1 pts, 9.4 rebs, 3.8 blks, 1.2 stls, 58.8% FG. Alabama simply has no one that will be able to match up with him physically, which is one of many reasons I'm sweating this game.

Also keep an eye on Myreon Jones. For whatever reason, Avery and his staff did not recruit the 6'3 guard originally from Birmingham, but he's off to a great start in his sophomore season. He's averaging 13.2 pts, 3.3 asts, 3.0 rebs, 1.2 stls, and is shooting 40% from 3. While Stevens/Watkins are likely at the top of the scouting report, if the Penn State guards have a major impact on this game, DJC's recap will likely be about a third blowout loss this season.

Prediction: Penn State looks like the superior team on paper, and the game is on their campus. Our guys will possibly be a double-digit underdog in this one. And honestly, that feels right to me. I remain confident that our guys will get better as the season progresses, but a road game vs a team with matchup advantages that beat the fourth-ranked team in the country in its previous game doesn't fill me with confidence.