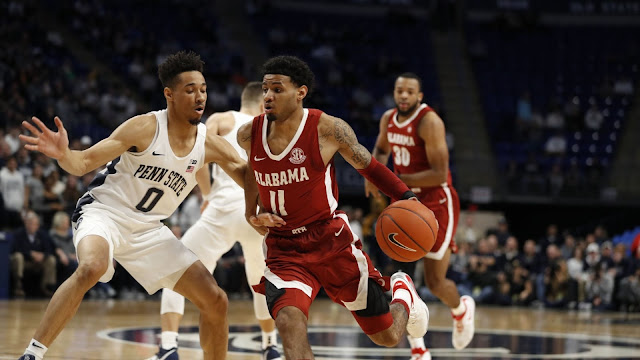 We should be used to gut-wrenching losses by this point, but that didn't make the 2-point loss to Penn State this past Saturday any easier to swallow. For the better part of the game our guys outplayed the Nittany Lions on both ends of the court. Unfortunately, the games are forty minutes. And it was in the final eight minutes that our guys went into a funk on the offensive end, only scoring eight points during that span. Alabama (4-5; KenPom: 81) must rebound quickly as the team will be on the court again on Wednesday night when they travel to Birmingham to play the Samford Bulldogs (6-6; KenPom: 194) from the Southern Conference. Game time is 6:30 P.M. CT, and will be streamed via the ESPN+ app. This game is being counted as a road game on the schedule, but it's being played at Legacy Arena. And let's be honest: there will probably be more fans there cheering for Alabama than Samford. So it goes.

My Two Cents: Both teams may have to overcome mental and physical hurdles in this game. For Alabama, they can't allow the disappointing finish at Penn State to lead to a flat performance on Wednesday night. And for Samford, it will be interesting to see how fresh they are after playing a game at Hawaii in Honolulu on Sunday night. Between the travel time to Hawaii, the game, the return trip, and being mentally prepared for a game three nights later against a team that's top ten in the country in tempo, will Samford have the energy necessary to compete for forty minutes?

Turnovers will once again be a key stat to monitor. Both teams rank among the worst in the country in turnover pct (Alabama: 295; Samford: 314). Alabama had a season low ten turnovers at Penn State so let's hope that's a trend moving forward. Offensive rebounding will also be key in this one. Both teams rank solidly in offensive rebounding pct, but both rank low in defensive rebounding pct (Bama: 221; Samford: 343). I'll go out on a limb here and predict that the team with more offensive boards is your likely winner on Wednesday night. Also key will be Alabama's three point defense. Samford is one of the best three point shooting teams in the country, making 40.5% of their attempts. That's currently 15th in the country. Bama's three point defensive pct has been solid this season, but it'll need to be great in this game.

While no one enjoys a 4-5 record, I do believe our guys have shown signs of improvement over the first month of the season. That improvement came very close to resulting in a big road win this past Saturday despite John and Kira not having their best games. Games in which both of those guys don't play well will be rare. Despite the injuries, the schedule, and the transition to a new style of play, this team is only three points away from being 6-3 and the perception of this team being much different. Something else to consider: our guys have only played four true home games so far. In fact, between the SFA game and the next true home game vs Richmond, twenty-three days will have passed. All that said, this three-game stretch coming up prior to the start of conference play is extremely important. Alabama only has one true home game during that span, but they will not leave the state. Hopefully the team can build some momentum.

Players to Watch: While I didn't agree with the ball going through Alex Reese in the final two offensive possessions on Saturday, I do think some fans have been unfairly critical of him this season. He's been playing through injuries so I think that should be considered when accessing his performance. And honestly, I think he's been solid despite the injuries. At Penn State, he finished with 12 pts, 8 rebs, and no turnovers in 29 minutes. This coming on the heels of a strong shooting game vs Stephen F. Austin. His shooting numbers haven't been great this season but, again, the hip and leg injuries he's playing through are certainly factors in that. Coming into the season I thought Kira and John would be the most important players on this team, with Alex being a close third. While that remains my opinion, Alex getting healthy is critical if anyone expects him to be more consistent.

Prediction: There's talent on paper for Samford, but they haven't played well vs the three best teams so far on their schedule (Louisiana Tech, Belmont and Hawaii). They lost those three games by an average margin of 24.6 points. Granted, all three were true road games, and all three of those teams are expected to contend in their leagues, but you'd like to see the team be more competitive if you're a Samford fan. I'm not even sure the narrative of tiny Samford facing mighty Alabama means all that much as, perhaps a sign of the times, only five players on the Bulldog roster are from the state of Alabama. I'm tempted to pick Alabama by double digits based on Samford's struggles in those three games I mentioned. Then again, very little has come easy for our guys this season so why should Wednesday night be any different?