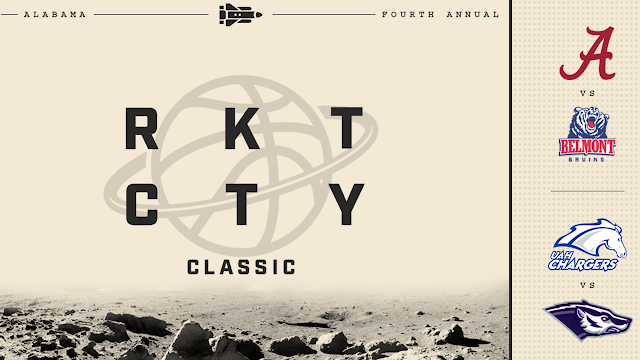 Winners of three of their last four, Alabama (5-5; KenPom: 74; NET: 94) will look to keep the good vibes flowing on Saturday when they travel to Huntsville to face the Belmont Bruins (8-3; KenPom: 77; NET: 89) from the Ohio Valley Conference in the fourth annual Rocket City Classic. Game time is 2:30 P.M. CT, and will be televised on the SEC Network.

My Two Cents: As Samford chipped away at a deficit that had once been 25 points in Alabama's favor, I began to have flashbacks of last season's loss to Georgia State. Fortunately, the team was able to score enough baskets to keep the Samford run in check. They certainly didn't get many defensive stops, that's for sure. For a moment, it felt like watching the football team (ouch). I have to believe the team relaxed a bit because their defense in the first half, as it has been in the last couple of games, was good. Adding to the anxiety in the second half was the inescapable conclusion that this team hasn't practiced the press break much this season. How else to explain how lost the team looked once Samford started pressing. Hopefully that is something that will be addressed in practice moving forward because, as DJC pointed out in his recap, future opponents would be foolish not to press Alabama based on the game film from Wednesday alone.

Now comes a quick turnaround against one of the more consistent mid-major programs of the last decade. It's still early of course, but the Bruins look like the clear favorite in the Ohio Valley despite losing some key players from last season's NCAA Tournament squad. Their schedule so far has been iffy; you could make the argument that Alabama is the best team they will have played up to this point. Nevertheless, this is a skilled, well-coached team that will provide a stern challenge on Saturday.

I feel like I'm going to write about turnovers each and every post this season, but turnovers will once again be a crucial stat. We know about Alabama's turnover issues this season. Belmont on the other hand has been very solid protecting the basketball. Their turnover pct is 17.5%, which is ranked 60th in the country. Alabama hasn't forced a lot of turnovers this season so it's not likely Belmont has a high turnover rate on Saturday. But what may be in Alabama's favor is that the Bruins don't force a lot of turnovers either. We'll get to the Bruins offensive numbers in just a moment, but let's just say that Alabama needs to create shot attempts on offense, not turnovers if they're going to win on Saturday.

Alabama will need to be sharp on defense for 40 minutes on Saturday because the Bruins are capable of filling it up. Their effective field goal pct is ranked in the top 20 in the country, with a 2-pt pct of 55.6% (also ranked in the top 20), and a 3-pt pct of 37.3% (ranked 42nd). The Bruins don't get to the free throw line much (ranked 334 in free throw rate with only 12% of their point production coming from the line), but neither do their opponents (only 23%, which ranks 27th in the country). Belmont doesn't force a lot of turnovers, but opponents aren't shooting high percentages either (effective fg pct: 46.2%; 3-pt pct: 30.3%; 2-pt pct: 46.6%). That suggests that Belmont's first-shot defense is tough so our guys are going to have to crash the offensive glass to create second-chance opportunities. In fact, our guys need to win the rebounding battle on both ends. One of the few areas of weakness for Belmont so far has been on the offensive glass where they currently rank 269 in offensive rebound pct. Despite their lack of size, our guys have been surprisingly solid on the glass this season. They have to win that stat on Saturday if they're going to win this game.

Players to Watch: Kira Lewis is averaging 37.6 minutes per game this season, and it appears to be catching up with him. In the first five games, Kira was averaging 21.2 points. In the last five games, he's averaging 12.2 points. Some of that is obviously due to other guys like JP stepping up on the offensive end, but his shooting averages have fallen off, and he's looked noticeably fatigued at times. Nate Oats has consistently said they have to find a way to get Kira more breaks in games. Unfortunately, the injuries to Herb and Beetle, and JQ failing to receive a waiver, have limited the number of available ball-handlers. With that in mind, the season really could hinge on Beetle and Herb getting healthy, because if Kira isn't at his best this team can't be at its best. With a lot of season left, Nate Oats may have to bite the bullet starting this weekend by cutting Kira's minutes back to at least 35 minutes on average.

Belmont has two guys that are shooting 40% or better from three so let's focus on them. Adam Kunkel is a 6'3 guard averaging 19.1 pts, 2.6 rebs, 1.9 asts, and a scorching 45.8% from three (38 makes on 83 attempts). If this guy gets many open looks, I can already envision the assortment of curse words I will be uttering on Saturday afternoon.

While I believe that Alabama can match up well physically with Belmont at most spots on the floor, the real matchup challenge will be in containing 6'11 center Nick Muszynski. A legitimate pro prospect, Muszynski is averaging 15.4 pts, 5 rebs, 1.8 blks, 1 ast, 59.1% FG, and 40% from three (8 makes on 20 attempts). While he's capable of making threes, Bama's best bet may be to hope that he spends too much time out there because I doubt any of our guys can match up with him if he receives the ball in the paint. Drawing some early fouls on him would be ideal.

Prediction: I don't know if you've noticed, but the SEC stinks this season. Not as bad as it was five/six years ago, but it hasn't been a great November/December for the league. Auburn and Arkansas have only one loss between them, but I think their schedules are questionable. The rest of the league has been downright brutal at times, including Kentucky. The winner of this league could have as many as five or six conference losses when all is said and done. That means less spots for the conference come March.

That makes this game very important for Alabama. Frankly, their resume isn't good at the moment. They've played the 2nd toughest schedule in the league (per KenPom), but you still have to win some of those games vs the more quality competition. Assuming Belmont has the type of season I expect they will, a win here could be a Q2, maybe even a Q1, win on the resume come March. The NCAA Tournament seems light years away for this Alabama team, but you still want to put yourself in the best possible position for the postseason should you continue to get better throughout January and February. Unfortunately, I believe Belmont might be the better team at this moment. And with Belmont's campus actually closer to Huntsville than Bama's, it's quite possible that our guys won't have the overwhelming crowd advantage in this game that they've had in recent years.