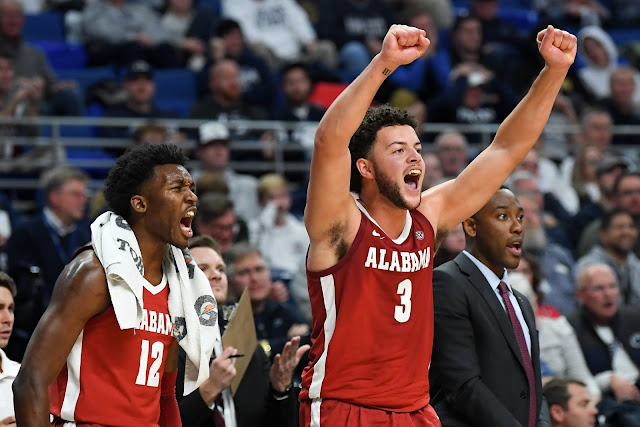 I hope you had a wonderful holiday. It's certainly easier as a basketball fan to prepare for the holiday when the team has won four of its last five games. Following a week off, Alabama (6-5; KenPom: 63; NET: 78) will return to Coleman Coliseum on Sunday to face the Richmond Spiders (10-2; KenPom: 85; NET: 55) from the Atlantic 10. Game time is 5:30 P.M. CT, and will be televised on the SEC Network. I know folks in Alabama like their Sunday night church service, but this team has been playing some good basketball lately. It would be nice if they had a large, supportive crowd awaiting them on Sunday night, don't you agree? Get a dose of worshiping in the morning, and bring any leftover prayers and fervor to Coleman in the early evening. Amen!

My Two Cents: Our guys played their best game of the season vs Belmont. They were aggressive on both ends of the floor, shots were falling, most of the players that saw action contributed, and it was a Belmont program that is known for its unshakeable play that became frustrated and overwhelmed. If what we saw in that game is a harbinger of things to come for this Alabama team, consider me excited.

But let's not get ahead of ourselves; it was one game. First things first: Alabama will have to deal with a Richmond team that appears to be one of the better teams in the A-10 this season based on the advanced stats. In fact, that conference as a whole has looked good so far with half of the league in the KenPom top 100. Richmond isn't a lock to be in the NCAA Tournament, but a win for Alabama could reap benefits in March. Based on the current NET rankings, this would be a Q2 win.

In order to win this game, Alabama will need another standout defensive effort. On offense, the Spiders have stood out in several categories. They're top 50 in adjusted offensive efficiency; top 15 in effective field goal pct; top 20 in turnovers pct (only turning the ball over at a 16.1% rate); top 20 in three-point shooting pct (39.5%); and top 15 in free throw pct. Where they've struggled on offense is on the offensive glass, and despite being a great free throw shooting team, they don't get to the line often (ranked 340 in free throw rate). Our guys need to win the rebound stat, keep the Spiders off the foul line, defend the three well and, as they did with Belmont, force Richmond out of their comfort zone in an effort to increase that turnover rate.

On defense, the Spiders numbers don't leap off the page, but they're respectable. One area Richmond has been strong is forcing steals (ranked 57th in defensive steal pct). Our guys have done a better job in recent games of limiting the turnovers, and that will have to continue in this game. Guarding in the paint will also be crucial as the Spiders are making 53.1% of their two-point field goal attempts.

Players to Watch: Herb Jones struggled earlier this season in the wake of an elbow injury he sustained in the season-opener, but he appears to be getting healthy if his recent numbers are any indication. In the last three games, Herb is averaging 10 pts, 7.3 rebs and 4.6 asts. It was the first time this season that the quartet of Herb, Kira, JP and Alex all had sizable impacts in the same game. If that becomes the norm, I feel very good about this team moving forward.

Prediction: This should be another challenge for our guys. This Richmond team is experienced (seven juniors on the roster), and prior to a disappointing home loss to Radford in their last outing, Richmond was playing as well as anyone in the A-10 not named Dayton. In a college basketball  season that has been sloppy drunk to say the least, with six teams already occupying the top spot in the AP poll, that loss to Radford doesn't seem as unusual, nor a condemnation on Richmond as a team. In fact, this is a good basketball team, and one very capable of doing what it did just three years ago when it came into Coleman and beat Alabama. Our guys can't afford a post-Christmas hangover. They seem to be healthier, and becoming more comfortable with the new style of play. The recent performances have been encouraging, and I think they keep that momentum as conference play looms.