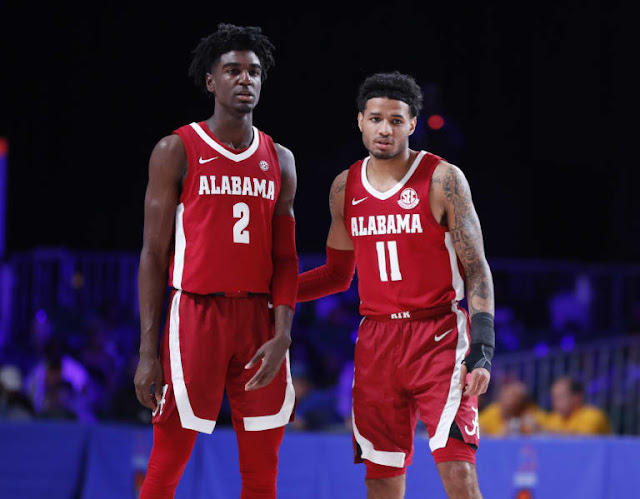 Okay, the vacation's over. The sun, sand and basketball were all fun and games, but it's back to the reality known as Tuscaloosa for this basketball team. From a basketball perspective, Alabama was outgunned for the most part at the Battle 4 Atlantis. Fortunately, they were able to salvage a win on the last day of the tournament. Unfortunately, the schedule doesn't let up. Alabama (3-4; KenPom: 79) will hope for back-to-back wins for the first time this season when it hosts the Stephen F. Austin Lumberjacks (6-1; KenPom: 201) from the Southland Conference on Friday night. Game time is 7:00 P.M. CT, and will be streamed via SEC Network+.

My Two Cents: Alabama had moments during the Battle 4 Atlantis where you could see things clicking, but until the final game vs Southern Miss, they were simply unable to do it for long stretches. And even in that game, Alabama struggled down the stretch of the first half before putting together one of their better halves of basketball this season in the second. It's a process right now. Fortunately the team gets a week off prior to this game. Seems like the practice floor is the best place for this team at the moment as they continue the transition to the new staff and their system.

Meanwhile, all Stephen F. Austin has done this season is go to Duke and broke the Blue Devils 150-game non-conference home win streak. Duke had not lost a non-conference home game since February 2000 and it was the first non-conference home loss to an unranked team since January 1983. That alone is bonkers. The fact that Duke was a 27.5 point favorite made it even more bonkers. You could make the very reasonable argument that SFA notched one of the biggest upsets in college basketball history. Coleman Coliseum will likely not intimidate the Lumberjacks. And unlike Evansville, which lost three straight following their massive upset at Kentucky, SFA won their following game at Arkansas State by 19. It all adds up to yet another challenging opponent for our guys.

This could be a very ugly game if the stats are to be believed. Alabama of course has had an ongoing struggle with turnovers. Their current turnover percentage is 22.3%, which ranks 295 in the country. SFA currently has the best defensive turnover pct at KenPom, forcing their opponents to turn it over 30.4%. And their defensive steal percentage is currently at 14.6%, which ranks 5th in the country. However, the Lumberjacks have also been generous with the ball on the offensive end with an offensive turnover percentage of 23.2%, which ranks 318. Alabama has not been a particularly good defensive unit so far. One example being that they only turn their opponents over only 17.4%, which ranks 284. Once again, turnovers will be the key stat in this one.

If Alabama can protect the basketball, they should be able to score efficiently. While SFA has been great at forcing turnovers, opponents have an effective field goal pct of 52.3% (51.1% from 2; 36.3% from 3), which ranks SFA at 273 in the country. They also send teams to the foul line a lot. Their opponents free throw attempts per field goal attempts is a whopping 64.1%, which ranks them 352. There are 353 D1 teams. On the flip side, the Lumberjacks are solid themselves in getting to the line with a 37.6% rate, which ranks 79th. Don't be shocked if we see a lot of turnovers and foul shots.

We should also expect a high tempo game. Alabama is currently ranked 6th in adjusted tempo and their average offensive possession is 14.5 seconds (opponents average 16.3). SFA is currently ranked 12th in adjusted tempo with an average possession length of 16 seconds (opponents average 15.2 seconds). So yeah, we could be in for a really messy game if both teams are sloppy going up and down the court. The team that can control the chaos the most will be your likely winner.

Players to Watch: It had been a rough start to his senior season for James "Beetle" Bolden. Shoulder surgery in the summer and a wrist injury earlier this season had limited him. But in the first two games in the Bahamas Beetle began to show some signs of life, finally having a breakout game on day three vs Southern Miss. He finished with 23 pts on 6-9 shooting (6-8 from 3), and added 2 rebounds, 2 assists and a steal. But he wasn't just effective on the offensive end, he was also very disruptive on defense as well. It was a complete game, and the hope is that there are many more like that in store moving forward.

SFA senior Kevon Harris is one of the better college basketball players in the country that many fans may not be familiar with. A 6'6, 216 lb guard, Harris is averaging 19.4 pts, 5.1 rebs, 1.4 asts, 1.3 stls and is shooting 49.1% from the field (38.9% from 3) and 77.8% from the foul line. He's not the only guy on the Lumberjacks roster capable of putting up big numbers, but it's a safe bet that if he's having a big night on Friday then Alabama is going to be in trouble.

Prediction: I don't know if you guys have noticed, but the SEC hasn't exactly been lighting it up in the non-conference so far. Auburn and Arkansas are the only two league teams that remain undefeated, and their schedule so far is questionable. One month into the season and nine league teams already have two or more losses. The league is currently ranked fifth in KenPom's conference rankings. If the league doesn't pick it up in December, the number of spots available for the NCAA Tournament will certainly shrink. For Alabama, that means that they need to string together some wins. SFA will be a trendy upset pick following their victory at Duke, but I got a feeling our guys show up and play well.