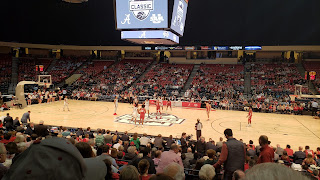 Alabama improved to 5-5 with a 105-87 "road" victory over Samford in downtown Birmingham.

The Tide started red hot with JP making 6 straight threes to open up an early 22-2 lead.  Alabama was unstoppable the first half, maintaining that 20 point margin to take a 57-37 lead into the half.  We only had 5 turnovers in the first half, and we quickly stretched the lead to 25 to start the second half.  Just when I thought we could relax, the team seemed to take their foot off the gas a bit and Samford started pressing.

Frankly, our press break was one of the worst I have ever seen.  I distinctly remember one possession where Galin in-bounded the ball to Herb, and all 3 of their teammates were already in the front-court and nobody came back to help.  We better be working on that in practice, because I suspect we will be seeing a lot of full court pressure after our future opponents watch the film from this game.

A flurry of turnovers and terrible defense leading to wide open layups and 3s allowed Samford to cut the lead to single digits.  Padgett did us a favor by finally calling a timeout despite the fact that his team had all of the momentum.  They cut the lead down to 6, but we were able to answer and almost immediately pushed it back to 10.  Thankfully, Samford simply did not have the horses to maintain the press for the entire half.  The score was 100-87 with just under four minutes remaining, and we switched to a 2-3 zone and shut them out the rest of the way.

JP had an unbelievable game with 39 points and 10 rebounds.  I wish we would have got him the ball more in the final minutes to give him a shot at 40.  He missed one three that would have put him over the 40 mark.  He had a double-double with 10 rebounds.  Alex was 4 of 8 from downtown and finished with 16 points.  Shack was a perfect 8 of 8 from the free throw line and ended up with 13 points.  Kira was also in double-digits with 11 points.  Herbert finished with 9 points, 7 rebounds, and 7 assists with only one turnover.  I thought he played well, but he should have been in double figures but failed to finish several bunnies at the rim.  As a team, we finished with 20 assists, but 16 turnovers.

Samford is not very good.  Sharkey was impressive at point guard with 18 points and 15 assists, and it's good to see our old friend Brandon Austin playing well, as he led them in scoring with 21 points.  At least this counts as a road victory.

There wasn't much of a crowd and the atmosphere was rather quiet for most of the game.  I would estimate about 4,000 or so were there, and the upper level of the arena was closed off.  At least 85% of the crowd was supporting Bama.

Up next, we make our annual trip to Huntsville for a neutral site game against a very good Belmont team.  Belmont beat Samford by 30+ and already has a road win at Boston College, for whatever that's worth.  The Von Braun center is actually closer to their campus than ours, and I suspect they will bring a strong following.  Hopefully our North Alabama friends will turn out and give the guys some support.  Tip off is set for 2:30 pm Saturday afternoon on the SEC Network.
Posted by DJC at 4:27 PM