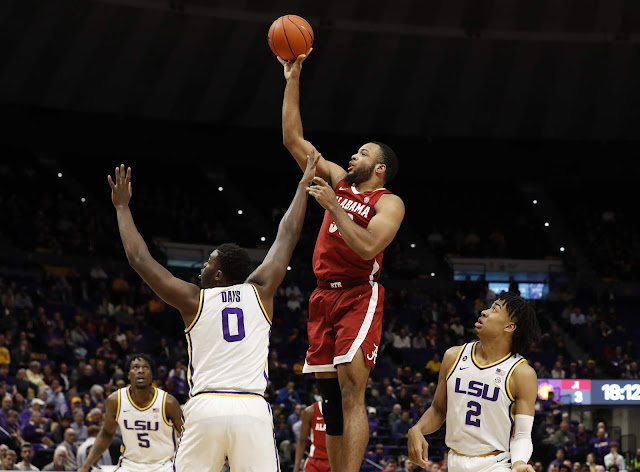 With their four-game winning streak snapped at LSU on Wednesday, Alabama (12-8, 4-3; KenPom: 45; NET: 40) will need to recover quickly because a good Arkansas Razorback team (15-5, 3-4; KenPom: 35; NET: 38) will be in Tuscaloosa on Saturday evening. Game time is 5 P.M. CT, and will be televised on the SEC Network. Arkansas has won six of the last seven games in the series.

My Two Cents: This is an important game for both teams. Alabama needs quality wins asap for its postseason resume, and the Razorbacks need a win to avoid falling two games below. 500 in league play. In recent seasons, Alabama teams have struggled to close out the season. I don't think this team or staff will face the same issues, but it's obvious that the team has not played its best in the last four games. To the team's credit, they went 3-1 in that stretch, but the chickens came home to roost in Baton Rouge. One of several reasons Arkansas has somewhat overachieved to this point in the season is they really play high-energy basketball every night out. If our guys come out sluggish, Arkansas will make them pay for it. Both teams are ranked in the top four in the league in tempo so expect a high-possession, likely high-scoring affair.

Believe it or not, Alabama is currently ranked 2nd in the league in offensive turnover pct at 16.8%. The team ranked ahead of them: you guessed it, Arkansas at 13.4%. The difference between the two is on defense where Arkansas ranks 3rd in defensive turnover pct, while Alabama ranks 10th. The team that wins the turnover stat is your likely winner on Saturday night. Rebounding and free throw attempts will also be something to track. Alabama of course was beaten soundly on the boards in their past two games. The biggest weakness for Arkansas this season has been on the glass; the Razorbacks rank 14th in offensive rebounding pct, and just 10th in defensive rebounding. Despite Alabama's struggles on the glass in the last two games, they've been a solid rebounding team this season so they need to get back on track. Arkansas ranks 13th in the league in opponent free throw rate. A key to Alabama's success in recent weeks has been their ability to get to the free throw line and convert once there. Arkansas will foul if Alabama is aggressive on offense so our guys need to force their guys to guard without fouling. That begins with dribble penetration to open up the floor, kick out for open threes or get all the way to the rim for a layup or free throw opportunity. Make the Hogs guard.


Players to Watch: I was disappointed to learn why John Petty did not start the game on Wednesday night. As someone who has improved his overall play, effort and leadership on the floor, he's not someone you want disciplined for a poor practice effort. When one of your leaders isn't giving the effort, it can trickle down to the younger players. To John's credit, I did think his energy level was where it needed to be but, because he obviously didn't practice well leading up to the LSU game, it shouldn't be a surprise that he didn't have a major impact. John has shown real growth and maturity this season so I don't expect this to be an issue moving forward, but this team needs him at his best if they're going to achieve their goals.

If you're putting together a list of the five players that are likely to be named SEC Player of the Year, Mason Jones should be on that list. The 6'5 junior has been explosive this season, averaging 19.2 pts, 6.4 rebs, 3.6 asts and 1.8 stls. He's scored 20 or more points in nine of the team's twenty games. Defending him will be a full-time job on Saturday.

Prediction: The improvement of this Bama team in all phases was chugging right along, but has fallen off some in recent games. I would argue that this team is still different than last season. Last season, the team probably struggles more to win at Vandy, maybe loses at home to Missouri, and almost certainly loses at home to K-State. The fact that this team hasn't played well in four games, but has still won three of those games is encouraging and a sign that the leadership from this coaching staff is much better. Coming off a disappointing performance at LSU and, assuming Bama fans turn out in large numbers for this one, I expect our guys to come out with better energy. It may not be enough to win the game - Arkansas is a tough, well-coached team - but improved energy and focus is the first step to correcting some things and avoiding the late-season slides that plagued Bama teams of the recent past.